Orphan Black's Tatiana Maslany tears up when asked about her support for the show's LGBTQ fanbase.

"It just makes no sense that there wouldn't be support for this community." 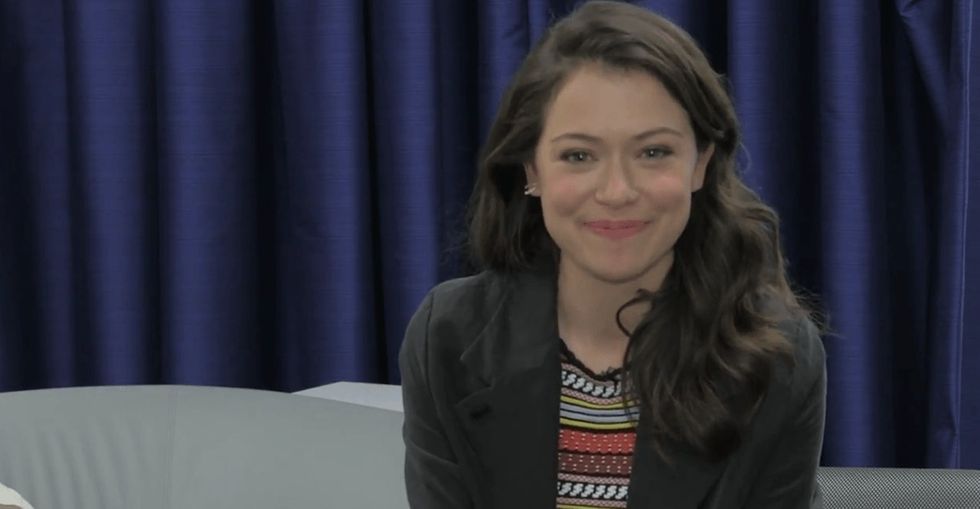 Tatiana Maslany wants to make one thing clear to the LGBTQ fans of her show "Orphan Black": She's got your back.

Maslany chatted with GLAAD's Claire Pires to discuss why she supports LGBTQ people and the show's LGBTQ fanbase and give a bit of insight into the characters of "Orphan Black."

When asked what it is she thinks that's earned the show so many LGBTQ fans, Maslany pointed to one thing: representation.

All GIFs via GLAAD.

A lot of times, LGBTQ characters are two-dimensional, with little about them worth noting beyond their gender or sexuality. On "Orphan Black," the gay, bisexual, and lesbian characters aren't sexualized for the entertainment of viewers, Maslany points out. They might be sexual characters, but that's just a small part of their overall character.

In the interview, Maslany highlights some of the show's core LGBTQ characters (including two she plays).

Maslany quoted back one of her favorite lines, spoken by Cosima, that serves both as the character's personal assessment as well as the way the show handles LGBTQ characters.

Say it with me: "YAAAAAAAASSSSSS."

When the interviewer asked why she's an LGBTQ ally, Maslany turned that question on its head, wondering why someone wouldn't be an ally.

Because really, what is there to gain by being antagonistic toward LGBTQ people? Why is it that so many people devote so much time to making life harder for them?

I know, right? I'm as confused as you are.

She even teared up at this part, trying to cover it quickly with a laugh and a hand wave.

Sometimes people find strength and inspiration in art and pop culture. For some "Orphan Black" fans, the show has given them the strength to be themselves.

Maslany tells a story about what it was like to hear from fans at conventions about how the show inspired them in one way or another to come out and be themselves.

It's awesome that "Orphan Black" has been able to help LGBTQ people, and it's even better to know that the show's stars are on board.