Nobody warned her about her post-baby body, so she spilled the secrets in a hilarious new ad.

This funny new commercial from HelloFlo is so great because it spills the secrets about what really happens after childbirth. 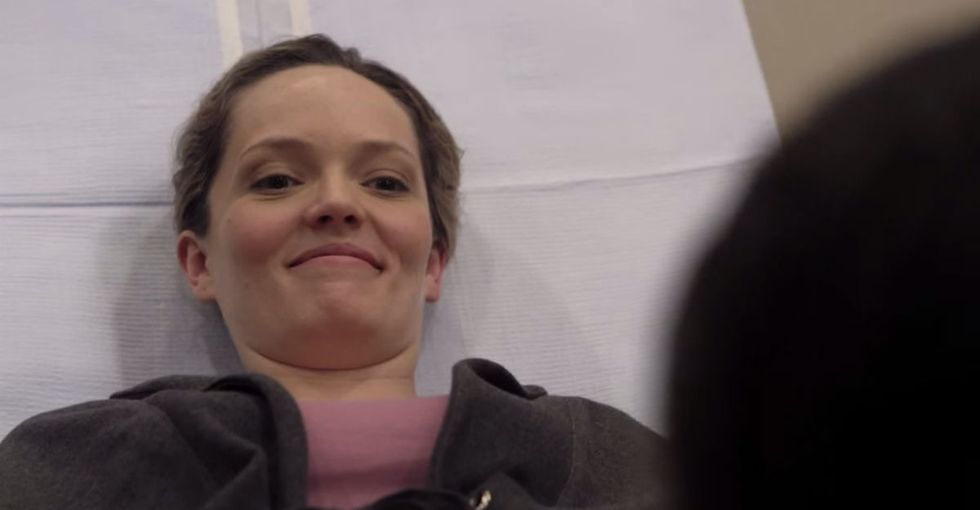 Everybody told her not to do it.

But when it came to spilling the secrets about how most women's bodies react after childbirth, she had to warn her fellow ladies.

A terrifying abyss is the perfect way to put it. Yes, childbirth is one of many biologically intriguing things that a woman's body can endure, but it's also been portrayed as an incredibly mysterious and terrifying experience that's rarely spoken of. As a new parent, I remember my anxiety as I went into labor, thinking, "I just want to make it through to the other side." Even though I'd done plenty of research and talked to friends, I had no real idea what would happen in the delivery room or what it would feel like afterward.

No one usually talks about birthing details. The same goes for what happens postpartum. I'm so glad that someone is finally telling the truth.

HelloFlo, a customized delivery service for fem care products, created a hilarious commercial to promote their "new mom kit," a survival box filled with everything from nursing shirts to nipple balm.

The ad tells the story of a fictional character named Mira, a new mom living in New York who puts on a fake production called "Postpartum: The Musical." The result is a delicious blend of Broadway-styled singing, piano playing, and hardcore Rockette-themed dancing that had me LOLing all the way through.

The commercial opens with a clearly stressed-out new mom intensely staring into the camera. Then, she lifts the veil on body happenings that lots of postpartum women don't know they'll confront, until it's a stone-cold reality.

"I have suction cups attached to my nipples, squeezing milk out of my rock-hard boobs. I fear nothing." — Mira

If you breastfeed, your boobs probably won't feel the same. Initially, you may sympathize more with farm animals, as you lactate, feed, and pump milk into what feels like perpetuity. At the same time, you may also feel incredibly unstoppable, almost like you could feed the world. Just make sure you get some new sturdy bras because, for the first couple of months, you'll even have to wear one to bed.

No matter how big or small your nips were pre-baby, you may be amazed at how long they can stretch to fit into your baby's mouth or the breast pump. Yes, it's incredible and beautiful that you're able to feed another mini-human, but the process of squeezing a bottle full of milk out of a minuscule hole is NOT cute. At times it can be a downright bloodbath.

"I mean no one ever warned me about cracked nipples. The blood, the pus, the pain. I wanted to stick my nips in a tub of ChapStick and stay there. Forever. ... It sucks. I'm trapped. My ducts are clogged, and my nipples are chapped. Mastitis." — Mira

"I expelled that placenta but the fun starts now. Cause, hon, my hoo-ha's who knows how. My perineum's torn, so I sometimes bleed. Plus, I raised this arm, and like, whoops, I peed." — Mira

Sure, it's impossible to think that you could escape the birth process without some sort of bloodshed, but no one ever tells you that it'll be flowing like the River Ganges. And I'm not talking about just a few minutes afterwards; depending on your birthing process, it could last for weeks. A lot of women have to wear disposable underwear, double up on pads, and sit on ice. Not to mention the thought of pooping can be scarier than giving birth all over again.

At your six-week post-baby checkup, the conversation with your doctor may sound a bit like this:

Doctor: "And good news, you can start having sex again."
Mira: "It's basically like being told your war-torn vagina's been cleared for drone strikes!"

Whether you're pregnant or not, a new mom, or have no interest in birthing, "Postpartum: The Musical" cracks open a super normal, yet unspoken, process about what women and their bodies go through. Instead of focusing solely on "the snap back," healing is what we should be talking about more often.

Check out the ad here: