What do you do when a guide dog is not an option? Meet the guide mini horse. 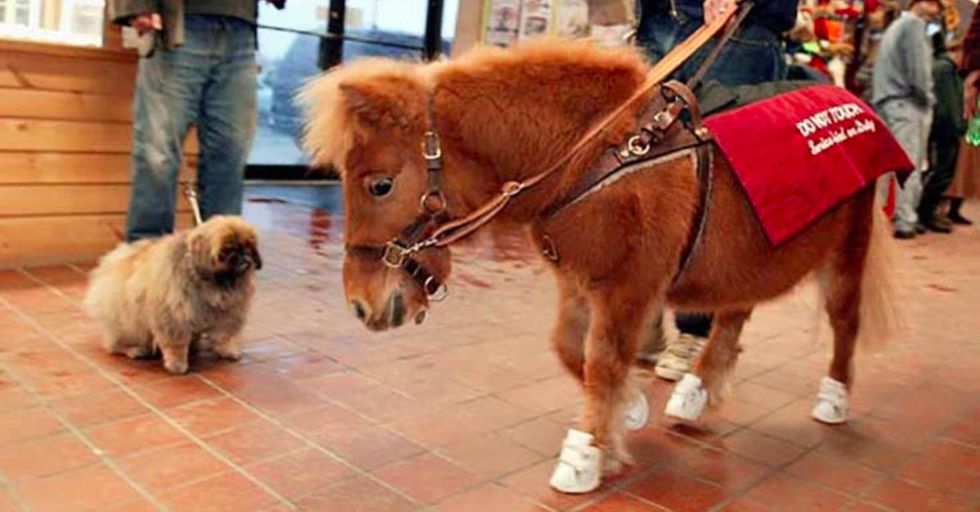 Guide dogs — sometimes referred to as Seeing Eye dogs — have been assisting disabled people for at least 100 years, with references to them dating back perhaps centuries.

The first U.S. school for guide dog training, named The Seeing Eye, opened its doors in 1929 and has been in business since. (The colloquial use of the term “Seeing Eye dogs" is actually a reference to the school's trademark and brand.)

But not all people like dogs, and this includes some people who are visually impaired and those with other disabilities that call for a service animal. So what other options are out there?

Dan Shaw walks through a mall in Maine with his guide horse named Cuddles. Note the sneakers. Image by Michael Andersen.

The guide mini horse acts much like its sibling service animal, the guide dog.

Much like the guide dogs, guide mini horses act as trusted aides for those in need, helping them navigate through the world. And both take about a year to 18 months to train.

But there are some major differences.

The Guide Horse Foundation in North Carolina notes that guide horses are useful for about 30 years compared to around a dozen for dogs, making them arguably more cost effective over their useful lifespan.

Guide horses are useful for about 30 years compared to around a dozen for dogs.

But there are downsides. The miniature horses need to live outside and require a lot more space than a guide dog, which can live in a small apartment without much difficulty. They also have the need to relieve themselves more often than dogs, making themselves much more cumbersome.

And while mini horses can be incredibly cute, this has its downside because a guide animal isn't supposed to be petted by others while on duty.

Guide dogs are great, but for some people they're simply not an option.

The most likely scenario is due to an allergy to dog dander, but there are other reasons. Take, for example, the situation of Mona Ramouni, a young Muslim woman in Michigan, reported by Today in the fall of 2010.

Born blind, Mona was an excellent candidate for a guide dog — except that she came from a devout Muslim family. Dogs are considered unclean under Muslim law and cannot be kept as pets — but horses can.

Mona received Cali, a guide mini horse, and has since been able to navigate the world without help from friends and family — unless one counts Cali as a friend.

While guide horses may be a second choice after dogs, the demand for them has been, per the Guide Horse Foundation, “overwhelming."

As of this writing, the foundation has stopped taking applications for horses.