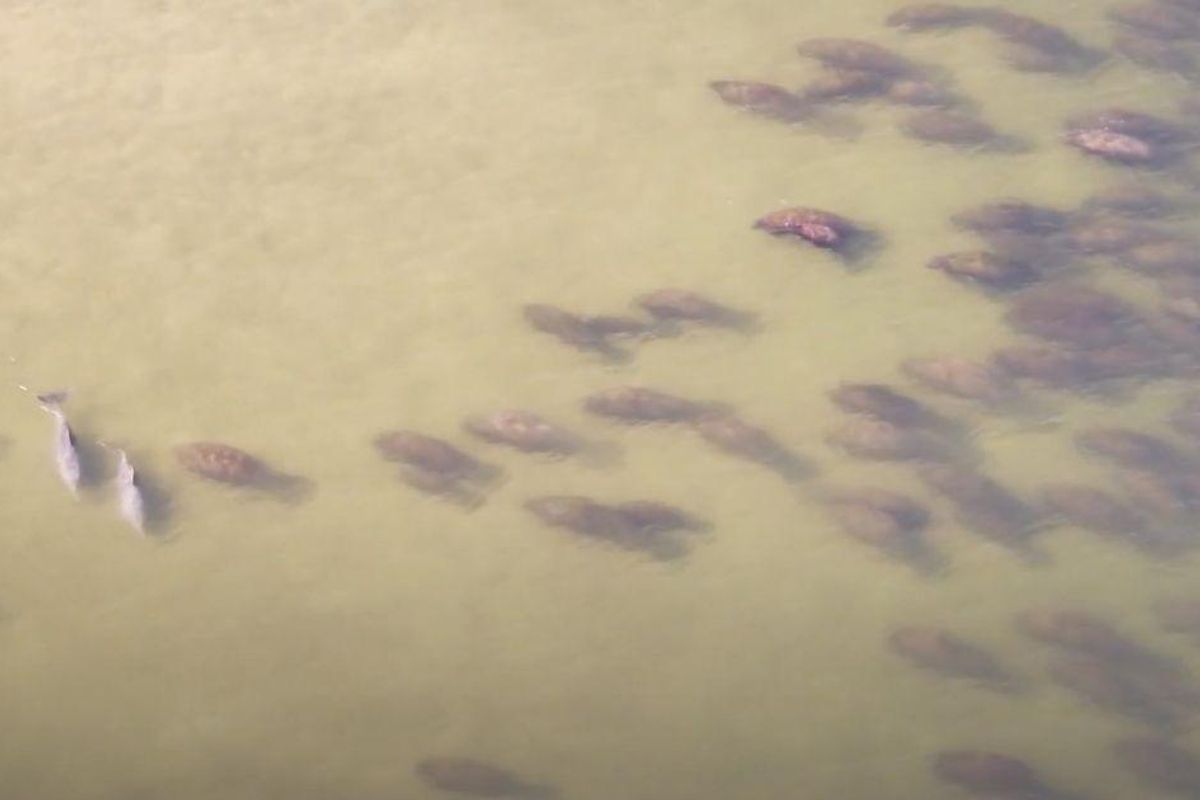 An aerial camera caught a delightful sight off the coast of St. Petersburg, Florida last week, as a small pod of dolphins swam through a huge aggregation of manatees. As the dolphins make their way through the shallow waters, we see around 170 manatees just chilling, as manatees do. Then we get to see the dolphins show off their playfulness, as dolphins do.

The marine mammal mingling is particularly meaningful knowing how the manatee has struggled for survival.

170 Manatees and Some Jumping Dolphins in St Petersburg, FL www.youtube.com

Florida manatees became protected under the Endangered Species Act in 1973, when their numbers were estimated to be between 800 and 1,000. By 1991, their population was still less than 1,300. But dedicated conservation and rehabilitation efforts in recent decades have increased that number to around 6,300. Manatees in Florida currently make up around half of the world's total manatee population.

The increase in numbers does come with a couple of caveats, however. Manatee populations are notoriously difficult to count accurately, so estimates are just that. The manatee was downgraded from "endangered" to "threatened" in 2017, but some advocates said that designation is misleading because the threats to its survival are still just as much of a problem.

The biggest threats manatees face are collisions with watercraft, habitat loss and degradation, fishing gear entanglement, human harassment, exposure to red tide, and climate change. The loss of the manatee's warm-water habitat is a vital long-term threat to the species, as it can't tolerate cold waters. Traditionally, they rely on natural springs to stay warm during cold weather, but urban and agricultural development has impacted many of Florida's natural artesian springs.

However, as far as conservation and rehabilitation goes, Florida manatees are a success story. Many groups, both within the government and non-profit sectors, work diligently to advocate for the protection of Florida manatees and educate people on how they can help. Seeing this large aggregation of manatees from above is a heartening reminder of how important that work has been.

The footage was captured by See Through Canoe, a company that sells transparent canoes and that shares videos of animal encounters off the Florida coast. They say that dolphins and manatees often swim in the same waters, but rarely interact directly. This summer, they shared a video of a small pod of dolphins actually seeming to play together—a phenomenon they say they've not seen in 30 years of observing these animals.

The Odd Pod. Dolphins and a Manatee Swimming and Playing Together youtu.be

As human activity continues to impact the well-being and survival of creatures like the manatee, we can use videos like this as inspiration and incentive to implement more environmentally responsible habits. Seeing what we're saving by pushing for ecologically sound policies and practices can go a long way toward keeping the momentum going.

From Your Site Articles
Related Articles Around the Web
conservation