Judy Blume tells it like it is when it comes to books and censorship.

Judy Blume's actions speak louder than words when asked how she feels about banning books. 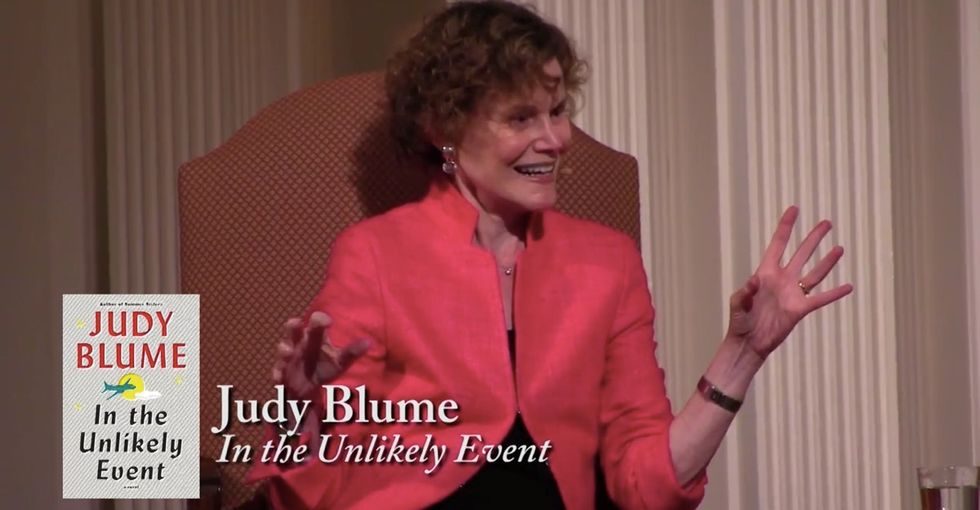 Blume was there promoting her latest novel "In the Unlikely Event," but her nearly hour-long conversation with NPR's Linda Holmes was an entertaining, career-spanning sit-down.

One of the interview's most interesting portions touched on the topic of "banned books," something Blume knows all too well, having been the target of censorship efforts ("Forever," "Blubber," "Deenie," "Are You There God? It's Me, Margaret," and "Tiger Eyes"). She was asked if it hurt for people to say her books were bad for kids.

Her response was honest:

But if this discussion happened in June, why am I writing about it in October? Well...

In 1982, in response to a massive push to ban certain books from schools, bookstores, and public libraries, the American Library Association set aside a week each year to celebrate controversial literature and push back on censorship.

Blume, whose work has faced countless challenges, is a vocal supporter of the week and anti-censorship efforts.

"Censors don't want children exposed to ideas different from their own," she writes on her website. "If every individual with an agenda had his/her way, the shelves in the school library would be close to empty. I wish the censors could read the letters kids write."

The larger point is about the important differences between criticism and censorship.

Criticism is the ability to say why you like or don't like something. Criticism is, generally speaking, good. Criticism sparks conversation.

Censorship is something else entirely. Again, from Blume's website:

Today, it's not only language and sexuality (the usual reasons given for banning my books) that will land a book on the censors' hit list. It's Satanism, New Age-ism and a hundred other isms, some of which would make you laugh if the implications weren't so serious. Books that make kids laugh often come under suspicion; so do books that encourage kids to think, or question authority; books that don't hit the reader over the head with moral lessons are considered dangerous." — Judy Blume

The fight against censorship is important, especially for anyone who stands out from the crowd.

In the Politics & Prose interview, Blume talked about growing up and so desperately wanting to be "normal." It's a theme that runs throughout her early work, in particular "Are You There God? It's Me, Margaret."

When you feel "different," like an outcast, it's extremely comforting to know that others like you have felt the same — even when that person is a fictional character named Margaret. To so very many, that book served as a guide to self-acceptance and understanding the importance of challenging norms.

Without Judy Blume, so many of us wouldn't have learned that wonderful lesson.

You can (and should) watch Judy Blume's full conversation with Linda Holmes below.