Jon Stewart urges action from Congress in his return to 'The Daily Show.'

They say, "Never forget," but their actions tell a very different story. 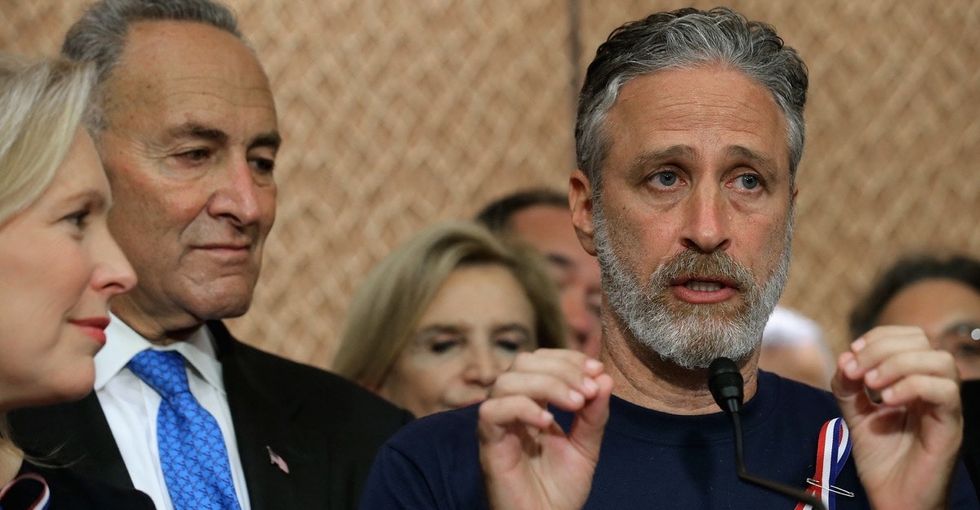 Jon Stewart's been busy since he ended his more than 16-year run as host of "The Daily Show."

And while he may not have been popping up on your TV to give his take on the day's news, he hasn't exactly been kicking back and relaxing in his retirement.

He's been helping turn his 12-acre farm outside New York City into an animal sanctuary, and he's continued his work trying to help 9/11 first responders get the health care they need and deserve. It's the latter cause that's got him back in the news.

On Monday, Dec. 7, Stewart returned to "The Daily Show" to use the show's platform to push for change once again.

In late 2009, Stewart helped draw attention to the James Zadroga 9/11 Health and Compensation Act. The bill was designed to help cover the health care costs of the nearly 50,000 first responders in the 9/11 attacks.

With plenty of data showing the long-term physical and mental health struggles faced by 9/11 first responders, it seemed like our duty as a country to take care of them. And while the bill passed, it only received five years of funding.

Stewart's goal? To push Congress to make that funding permanent.

Both Democrats and Republicans support the bill, so what's holding it up? Well...

"It seems like a no-brainer," says host Trevor Noah, about making the Zadroga bill's funding permanent. "So, Jon, what's holding it up now?"

There are 67 Senators and 260 members of the House of Representatives in support of this bill. If Congress were to vote on it, the bill would easily pass. The problem lies with Senate Majority Leader Mitch McConnell (R-KY) and Speaker of the House Paul Ryan (R-WI).

Stewart says he has hopes that Speaker Ryan will bring the bill to a vote in the House, but Senator McConnell is a different story.

Ryan and McConnell are seen here walking the halls of Congress. Photo by Chip Somodevilla/Getty Images.

There are very real, tragic consequences of inaction. Luckily, they can be avoided if Congress acts.

Perhaps the most powerful moment of Stewart's return to "The Daily Show" was when he recreated the panel discussion he had during that first push to get the Zadroga Act passed. The original panel featured four 9/11 first responders making the case for why members of Congress — who so frequently call these responders heroes and say things like "never forget" — should fund their health care for illness related to that day.

Now? There's just one left. Two of the others were too sick to appear on the show, and the fourth died.

Stewart sits with the lone remaining panelist from his show five years ago. Screenshot via "The Daily Show"/Comedy Central.

But we can help by using social media to urging Congressional leaders to give the extension bill a vote.

Using the hashtag #WorstResponders, The Daily Show viewers have already begun pleading with Senator McConnell to stop blocking the bill and to make permanent the health benefits the brave individuals who ran toward danger on 9/11 so desperately need.

You can watch the video of Jon Stewart's return to "The Daily Show" below.