If anyone's ever told you that you'll regret your tattoo, they should listen to these older folks.

Regret? Not even close for these people. 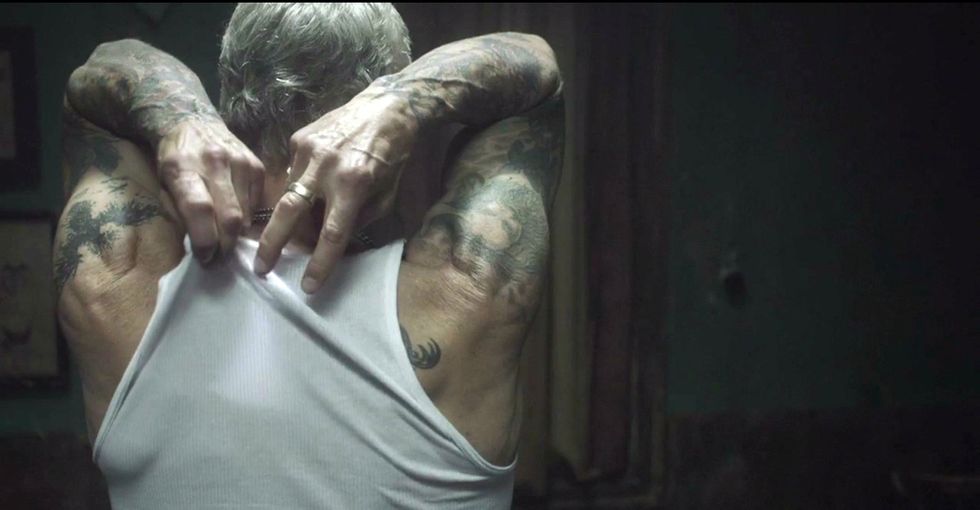 If you have a tattoo, you've likely heard at least one person tell you that you're gonna regret it.

Sure, it's possible to make a mistake and end up with a tattoo that you wish you hadn't gotten.

But it's also possible you'll love your tattoo(s) forever and always, much like these people.

Angie Bird directed a wonderful documentary called "You Won't Regret That Tattoo," featuring folks who are a bit older sharing stories about their tattoos. One person got their first at 17 years old, another at 68, and the rest somewhere in between.

They shared their raw and honest — and funny and light — stories, all leading to the same conclusion: If you're like them, you won't regret that tattoo.

Rick got his first at 17. Many of his tattoos represent significant parts of his life.

All images from "You Won't Regret That Tattoo"/Vimeo.

Then there's Bernice, whose husband always told her she didn't really want a tattoo. She told him she sure did, and one day, she just might get one. She's happy to see women's roles in the world changing.

Maria got her first tattoo almost 35 years ago and points out that "opinions are like a**holes: Everybody's got one and they all stink!"

And perhaps my favorite is Monica, who was first tattooed when she was 56 in memory of her late husband, who she isn't sure would have approved, but "he wasn't here, so I went ahead and did it."

Given that her husband's biggest regret was not doing enough of what he wanted, it's quite fitting that Monica did what she wanted — isn't it?

This short documentary is totally worth your time, especially if you're tired of hearing that you'll regret your tattoos.

Because these interesting people have no regrets ... but they do have some cool stories!