How a tour of a Norwegian jail might make you reconsider how effective the U.S. justice system is

The point here is not so much that one system is obviously better than the other, but that the way we run prisons in the U.S. is not the only way to do it. 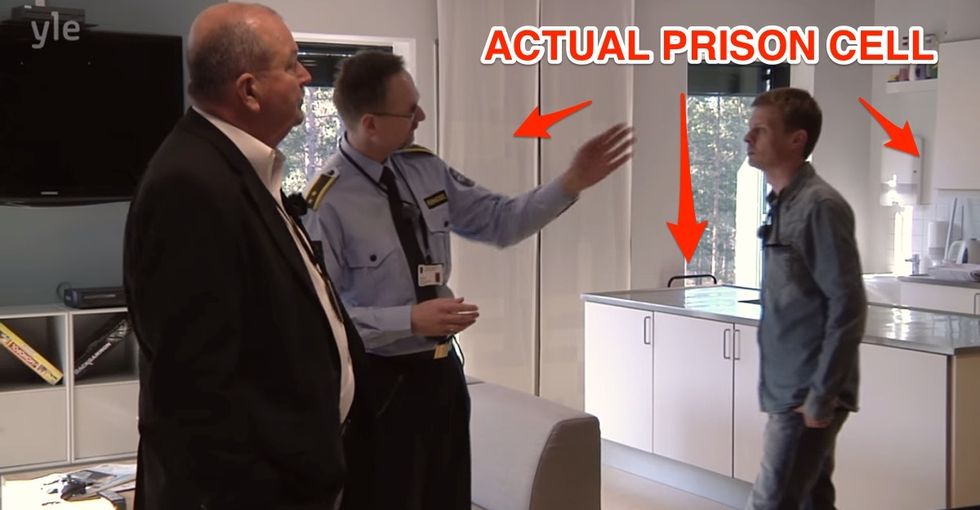 What comes to mind when you hear the word "jail?"

Probably "the opposite of freedom."

AMERICA: the home of some of the not-so-free. Image via Pixabay.

There's the overcrowding, crappy food, and the complete lack of privacy — all of which make one thing clear: Jail is not meant to be a picnic. It is a punishment for committing a crime after all.

In America, we're taught that it's meant to be anything but pleasant.

A documentary series that follows a tour of a Norwegian prison shows a very different method of imprisonment.

This TV series, titled "The Norden," features an American named James Conway as he visits different prisons in Scandinavian countries. Conway, who spent nearly 40 years of his life working for New York's prison system, is particularly struck by the accommodations at Halden, a prison in Norway.

First of all, the prison's locale is gorgeous — it's surrounded by beautiful Norwegian scenery. The inside is breathtaking, too; the inmates have pristinely furnished living rooms, a laundry room, and — get this — a music studio. Conway really can't believe what he sees.

Why are things so "good" for these Norwegian inmates? It comes down to the system's values.

"One of the principles in the Norwegian Correctional Services regarding [is] normality, which means that you should serve in just as normal conditions as possible." — Jan Strømnes, deputy head of Halden prison

(This sounds better than normal to me, but maybe it's because I don't live in Norway and am currently dealing with a mouse infestation in my apartment).

Given his background working for the New York prison system, Conway was not convinced of Norway's approach to prison life.

"If you put that much faith in [the prisoners] and that much of a luxurious environment for them to live in, let them have the keys," he says.

"Why have them in prison, anyway?" Conway asks.

The Norwegian system focuses more on prison as a venue of rehabilitation rather than one of punishment.

And why Conway — and many Americans — might scoff at the concept of a comfortable prison (what's the deterrent if prison is so nice?), these fact-checked statistics from a segment of The Young Turks might make him reconsider:

Hard to believe, isn't it?

Perhaps Norway's way of doing things isn't as bizarre as we think.

You can watch the excerpt for yourself here: