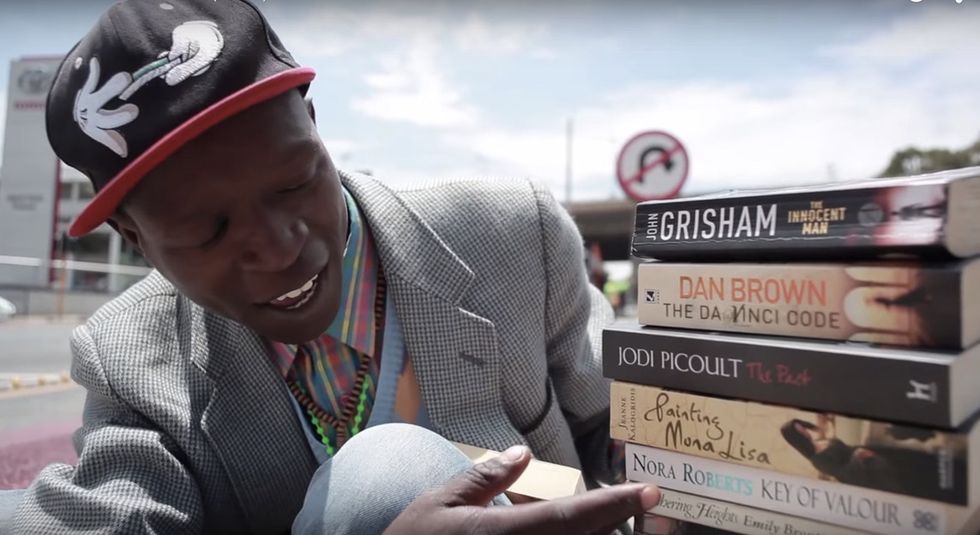 When Philani Dladla found himself homeless on the streets of Johannesburg, he wanted to do more than just ask strangers for money to get back on his feet.

He wanted to try something different.

Dladla decided to see if he could sell his knowledge instead.

"I thought I could be different and actually give people something worthwhile — like a book or book review — in exchange for money," he writes on his website.

He knew he had plenty of them to give. He'd loved reading since he was young, and was once left with almost 500 books when a family friend passed away. In a bind and on the streets years later, he went for it.

Dladla began selling books and book reviews to the people he encountered day to day. He soon became known as "The Pavement Bookworm" around the streets of Johannesburg. Today, he's considered a worldwide inspiration.

Selling book reviews turned out to be more than a unique approach. It helped Dladla lift himself out of poverty and drug addiction.

"While selling books I realised how much money I was wasting on getting my next fix," he said. "With some self-motivation and a lot of self-help books, I made the decision to stop taking drugs."

He was able to get back on his feet, and now he's making sure that others stay on theirs — especially underprivileged kids.

"I started using the extra income from selling books to give free books to underprivileged children," he said. "In doing that, I started the Book Reader's Club for the kids in Joubert Park."

He formed his own book club, you guys! The Pavement Bookworm is on a roll.

"I want to be able to help young kids reach tertiary education without having to worry about finding the money. Too many kids lose their way after high school — many of them turn to drugs, alcohol and crime. I want to change that."

By the sound of it, he is helping to change that. The next chapter of his life is off to a very positive start.

The Pavement Bookworm sure knows a lot of stories, but I think the most inspiring one of all is his own.

Strangers gave him a chance, and he delivered and saved himself. It shows the power of reading, the power of learning, and the power of believing in yourself and in others.

Hear more about it and share the happy vibes in this great CCTV Africa feature: