High fives to Morgan Freeman for transforming his ranch into a 124-acre honeybee sanctuary. 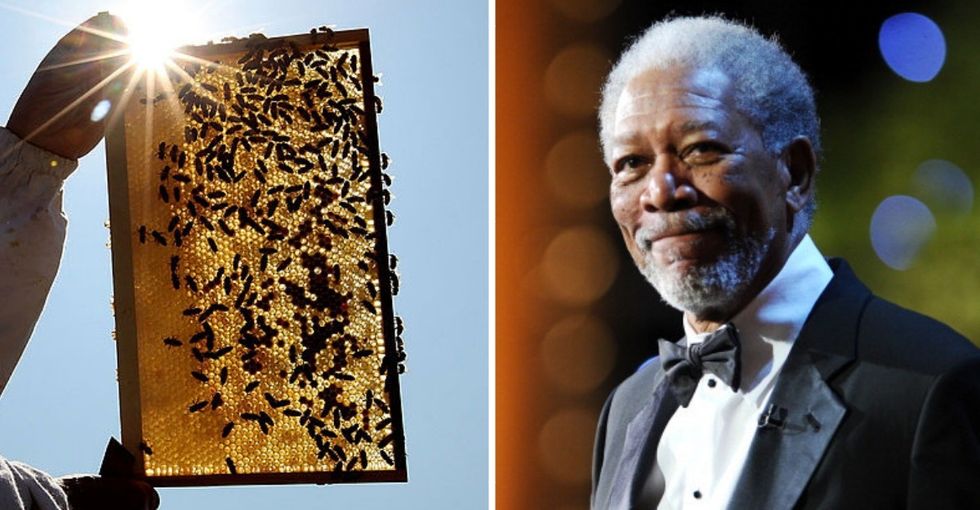 Morgan Freeman has donated his land to honeybees to help stave off a looming disaster.

America's favorite narrator is hoping to tell a new story for the world's waning honeybee population by giving them his 124 acres of land to live on. The 81-year-old actor took up beekeeping as a hobby in 2014 and converted his Mississippi ranch into a bee sanctuary. He brought in 26 bee hives from Arkansas and planted acre upon acre of bee-attracting vegetation including magnolia trees, lavender, and clover.

He fed the bees sugar water himself as they adjusted to their new home, and has said that he's never been stung despite not wearing a protective suit or hat. Freeman doesn't harvest the bees' honey or disrupt their hives; his goal is to help repopulate the dying honeybee population.

Freeman says his motivation for building a bee sanctuary is to help rebuild "the foundation of the growth of the planet."

In a 2016 interview on Larry King Live, Freeman explained why he decided to transform his ranch into a home for honeybees.

"There has been a frightening loss in bee colonies, particularly in this country," he told King. "To such an extent that scientists are now saying 'This is dangerous.'"

In 2014, shortly after he moved the hives to his ranch, Freeman chatted about his beekeeping hobby with Jimmy Fallon, "There is a concerted effort for bringing bees back onto the planet," he said. "We do not realize that they are the foundation, I think, of the growth of the planet, the vegetation..."

Humans rely on honeybees and other insects to pollinate our crops. If pollinators die off, our food supply will suffer. The chain reaction of losing the bee population could be devastating for life as we know it.

Why are the bees dying? There are multiple answers, and many point to human disruption.

Last year, according a survey conducted by Auburn University and University of Maryland, U.S. beekeepers said that 40 percent of their honeybee colonies had died off in the previous year—a 33% increase from the year prior. The reasons for the die off are multifaceted.

Colony Collapse Disorder has been affecting certain bee species for the past decade or so. Scientists have come up with multiple possible causes, including environmental stressors, insecticides, lack of genetic diversity in colonies, and mites that infest colonies.

Bees may also be a victim of climate change, according to the researchers who conducted the survey. Geoffrey Williams, assistant professor at Auburn, told Bloomberg, "Changes in climate and weather affect food and forage for bees. It’s pretty obvious that if you have bees already on the edge and you have a radical, quick weather shift, they aren’t going to do as well."

Pesticides are also to blame. Neonicotinoid pesticides, which are commonly used in agricultural areas, kill bees and inhibit their ability to reproduce. Scientists say these pesticides kill bee populations slowly, and are particularly harmful to queen bees, which affects bee populations over time.

Kudos to Freeman for creating healthy home for honeybees. Environmental responsibility belongs to all of us, and each act to protect and preserve our planet makes a difference.