Her dad thought her clean energy idea was just a 'kid's project.' He was wrong.

Cassandra is fighting climate change, and she's bringing her whole town with her. 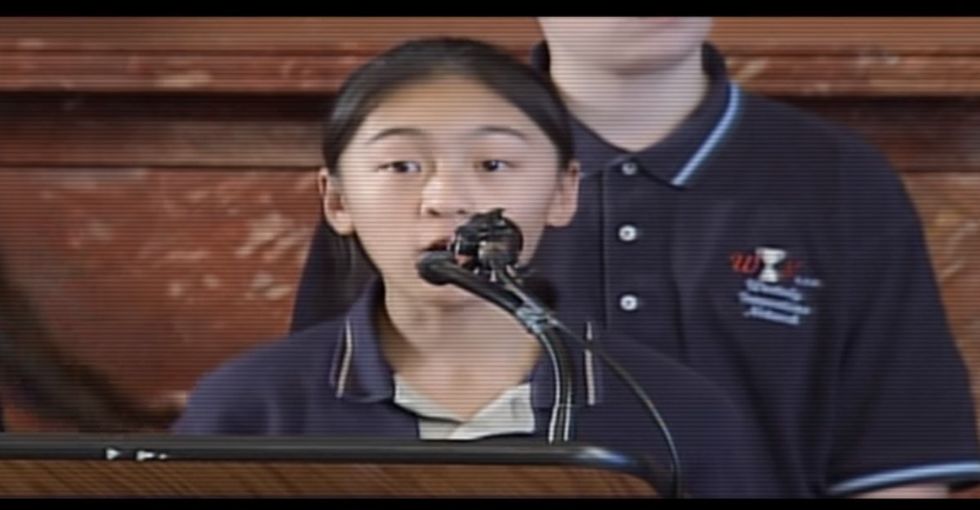 When Cassandra was 10 years old, she decided to take on climate change ... and bring her whole town with her.

In fifth grade, she'd learned that if the world's addiction to fossil fuels continues, it's only a matter of time before her entire town would be underwater. (When you use carbon-emitting energy like we do, that can happen.)

“Our Ocean State of Rhode Island may become the Under Ocean State by 2100 if global warming is allowed to continue at the current rate," Cassandra, now 17, said in a speech a few years ago.

So she came up with a plan.

With help from friends, Cassandra launched Turn Grease Into Fuel, or TGIF.

Their strategy was pretty simple ... but also sort of ingenious.

You know all that wasted used cooking oil that restaurants just throw away? It can be used as biofuel — energy that contributes significantly less to global warming than fossil fuels.

TGIF began reaching out to local restaurants to see if they could use leftover cooking oil for the initiative, and — slowly but surely — the idea caught on. The City of Westerly, Rhode Island (Cassandra's hometown) decided to help out, too, setting up a grease recycling site where TGIF could do its work.

And here's where it gets really good: The biodiesel created by TGIF goes toward warming the homes of families in need. Because why not donate the energy to those who could use it most?

“We kind of thought, 'This is a kid's project,' you know," said Jason Lin, Cassandra's father. "'It will probably last a year or two the most.'"

To date, TGIF's efforts have helped warm the homes of about 400 families, but that's just the start.

Since its launch, TGIF has been incredibly successful both in terms of combating climate change and helping those in need. Through partnerships with 132 (!) restaurants, they've recycled enough cooking oil to offset 3 million pounds of CO2 emissions, according to the EPA's estimations.

But TGIF's impact goes even further beyond greenhouse gas reductions and warming homes for those in need — the group is changing hearts and minds, too.

TGIF has "opened my eyes to see that something needs to change or else this beautiful world we live in might not be here anymore," said chef Joseph Tanton of Pleasant View Inn, a TGIF partner.

TGIF is proof that sometimes a small group of kids in a small town can make a huge difference.

And all they needed was some cooking oil and a little determination.