Hayley Williams has grown up since that regretful lyric 10 years ago. We should let her.

She's not in the business of misery anymore. 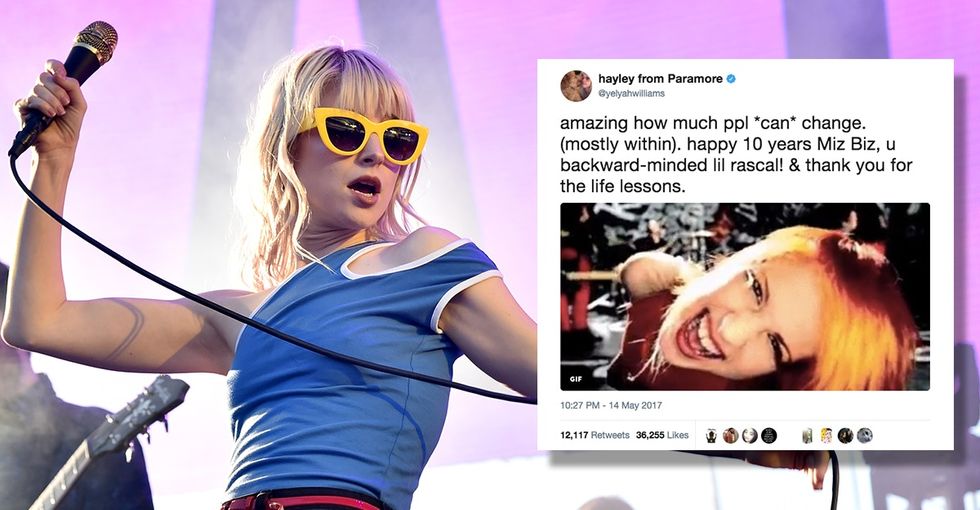 In the summer of 2007, Paramore unleashed a pop-punk anthem on the world with "Misery Business."

The song — the first single from the band's second album "Riot!" — details a true story about singer Hayley Williams (who was 17 at the time) feeling betrayed and backstabbed by another girl. It was 100% undiluted high school drama. It was also catchy as all hell.

While the song is still a banger a decade later, a few of the lyrics haven't exactly weathered the test of time. Specifically, the line "Second chances, they don't ever matter / People never change / Once a whore, you're nothing more / I'm sorry, that'll never change."

People have been criticizing Williams for that particular lyric for a while now, calling it "anti-feminist." So she's addressing it head on.

In a recent interview with Track7, Williams acknowledged the backlash, saying that she was a bit annoyed because she "had already done so much soul-searching about it, years before anyone else had decided there was an issue."

"When the article began circulating, I sort of had to go and rehash everything in front of everybody," she said. "It was important, however, for me to show humility in that moment. I was a 17 year old kid when I wrote the lyrics in question and if I can somehow exemplify what it means to grow up, get information, and become any shade of 'woke,' then that’s a-okay with me."

She recognizes now how she was unwittingly "feeding into a lie that [she'd] bought into, just like so many other teenagers — and many adults — before [her]," about being a "cool girl" and tearing other women down. In other words, she's a more mature person at 28 than she was at 17.

In May 2015, she addressed the lyric in a Tumblr post, saying that she's not ashamed of her mistakes because they've helped shape her into the person she went on to become.

Williams was a little more self-aware at the time than even she gives herself credit for.

David Bendeth, who produced the "Riot!" album, opened up about the process in an interview with Billboard to mark the record's 10th anniversary, touching on Williams' reluctance to sing the infamous lyric.

"Hayley was upset about that girl [who was the subject of 'Misery Business']. In fact, in the lyrics she wrote, 'Once a whore, you’re nothing more' — and I remember at the time, she looked at me and said, 'I don’t think I can sing this. I don’t think I can say this. This just isn’t me,' and I said, 'Hayley, it is you and you wrote it. You have to sing it,' and she says, 'I just don’t think it’s right. I think morally it’s wrong to call somebody that.' I said, 'You’re not [calling somebody that]. You’re explaining the situation,' and she said, 'Okay, I’m going to sing it. I’m not going to like it, but I’m going to sing it.'"

We can all relate to regretting things we said or did when we were younger. It's how we react when those things resurface that says the most about who we are as people.

Learning to admit our mistakes and grow from them is part of being human.

In a world where kids are growing up online, posting to social media sites at younger ages, these mistakes are more likely to be the type that are not only public now, but will be public 10 years from now. The type of scrutiny previously reserved for rock stars, politicians, and public figures will increasingly seep into the lives of everyone.

While there are things people can do to keep their information private to avoid embarrassing revelations years down the line (always check your privacy settings), there's also a lot we can do as individuals in society to create a more empathetic culture that allows people to evolve beyond past mistakes and grow into their best selves — or not make those embarrassing mistakes in the first place.

In the years since the release of "Riot!" Williams has done advocacy work in support of LGBTQ people, the environment, survivors of sexual assault, music education, and the fight against breast cancer. One way to start creating a more empathetic society is by accepting and acknowledging Williams' statement at face value, bolstered by her actions, as a sign of her growth, humility, and most of all, her humanity.