Famous Indian snake hunters have been deployed to Florida to fight pythons. 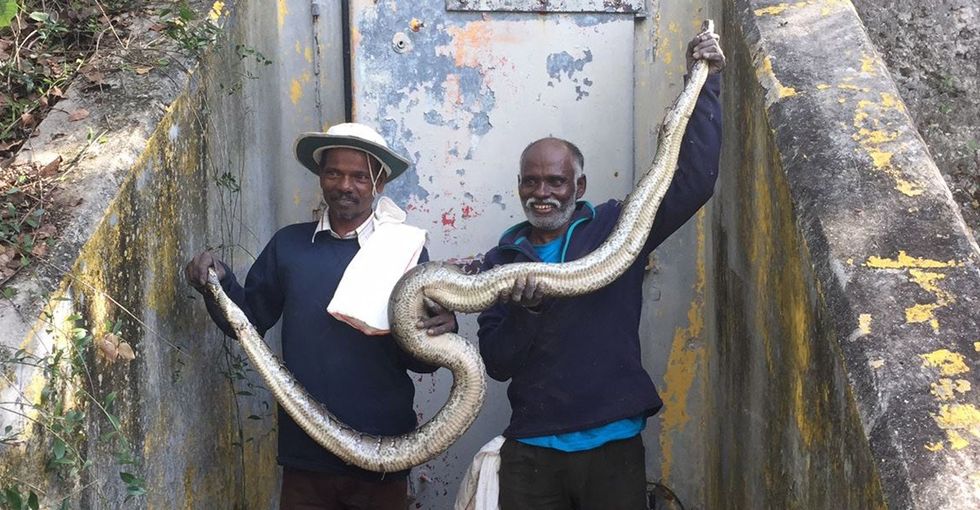 The Everglades is famous for it beauty, but it has a serious problem: invasive giant snakes.

Burmese pythons are one of the largest species of snake on Earth. They're normally native to southeast Asia, but accidental releases and irresponsible pet owners introduced them to Florida as well.

Pythons can grow up to nearly 20 feet long and are eating native mammals and birds — even alligators and mountain lions aren't safe. What's worse, the pythons have started to breed.

For years, the Florida Fish and Wildlife Conservation Commission and other local agencies and organizations have tried to keep the snakes contained. They've tried radio-tagging so-called Judas snakes to track down popular snake hangouts and hosting the annual Python Challenge for hunters.

Photo from the Florida Fish and Wildlife Conservation Commission/Facebook.

Masi Sadaiyan and Vadivel Gopal are part of the Irula tribe from India. The Irula live in Tamil Nadu, a state on the southern tip of India, and have been expert snake hunters for generations. They catch and milk cobras and other vipers, a vital step in producing life-saving anti-venom.

The University of Florida and the Florida Fish and Wildlife Conservation Commission (FWC) brought the men to South Florida in early January to learn their secrets.

An Irula snake catcher in Chennai, India, in 2016. Photo from Arun Sankar/AFP/Getty Images.

As of this writing, Sadaiyan and Gopal have already caught 15 snakes, according to FWC.

They take a different approach than the typical biologist. Instead of focusing on sunny roads and levees — some of the snakes' favorite places to warm up — the men head for the thick brush, grass, and boulders. They're armed with only tire irons and use them to beat back tall grass while looking for subtle signs like tunnels, scat, or tracks in the sand. The biologists trail behind, accompanied by the men's two translators.

There was one point, reports the Miami Herald, where they spotted the tip of a tail sticking out from inside a vent in an old abandoned missile site. They followed the vent to find the other side, hoping to catch the snake if it escaped, only to find another different tail sticking out the other end. Over the next five hours, the men extracted four snakes, including a 16-foot-long female.

15 snakes are only a small fraction of the python population, but it's pretty great compared to other approaches.

Photo from the Florida Fish and Wildlife Conservation Commission/Facebook.

For comparison, about 1,000 hunters took part in last year's Python Challenge. After a month, they had only bagged 106 snakes. So two guys with tire irons catching 14 in two weeks is pretty great. But the point isn't just raw numbers, it's teaching biologists new ways to look for the snakes.

"Since the Irula have been so successful in their homeland at removing pythons, we are hoping they can teach people in Florida some of these skills," said FWC section leader Kristen Sommers.

The captured snakes are either euthanized or used for education. Sadaiyan and Gopel, for their part, seem to be having a good time.

Sadaiyan and Gopal are expected to stay for a couple of months. So far they have been working in Key Largo and the Everglades, but they're expected to visit other areas of South Florida as well, says FWC.