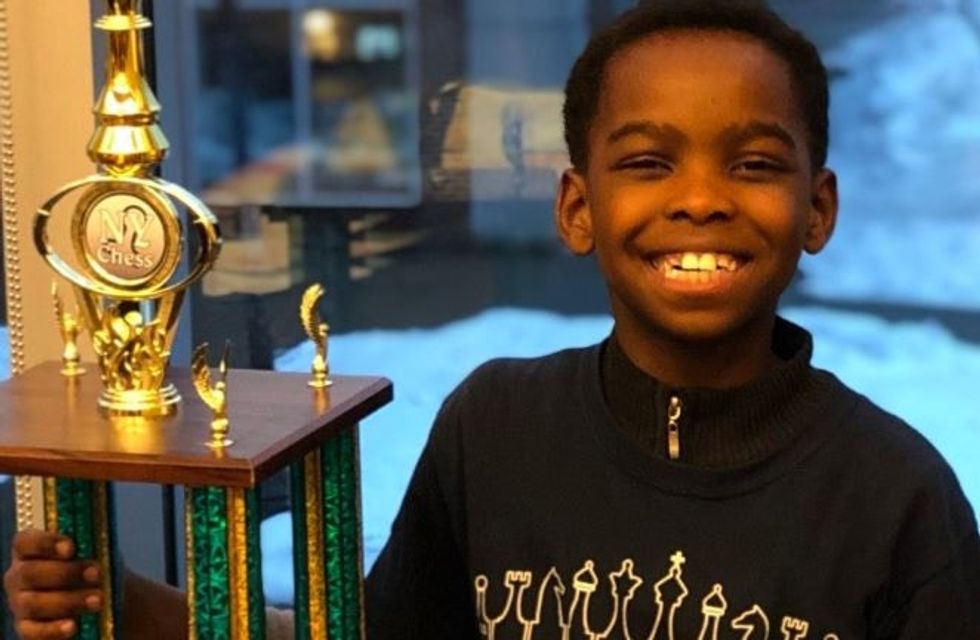 He went undefeated in the tournament beating children from elite private schools.

“I want to be the youngest grandmaster,” he told the New York Times.

While the feat is impressive, what’s even more remarkable is that Tani, as he’s known, has only been playing chess for one year. Add to that, he’s only lived in America for two years — his family fled northern Nigeria in 2017 avoid being killed by Boko Haram terrorists.

And he lives in a homeless shelter.

For a little more than a year, Tani and his mother and father have lived in a shelter in New York City. His mother recently passed a course to become a home health aide and his father, Kayode, rents a car so he can drive for Uber and recently became a licensed real estate salesman.

The family has requested asylum, but their request is coming along slowly. The have a hearing scheduled for August.

Young Tani already has seven chess trophies that sit beside his bed in the shelter. He became enamored with the game after joining the chess club at his school P.S. 116. When the head of the school’s chess program, Russell Makofsky, heard that Tani's Family as homeless he waived the fees.

“He is so driven,” his school chess teacher, Shawn Martinez, said. “He does 10 times more chess puzzles than the average kid. He just wants to be better.”

In addition to participating in the school chess program, every Saturday he attends a three-hour practice session in Harlem. He also practices every night on his father's laptop.

When news of his astonishing story spread, Makofsky started a GoFundMe campaign to help the family find a place to live. In just four days the campaign has already raised nearly $200,000 for the family — more than enough to get them an apartment.

After the generous donations poured in and the family knew they could get back on their feet, Kayode decided to pay it forward. He announced on the GoFundMe page that the rest of the money would go to create the Tanitoluwa Adewumi Foundation “to share the generosity of others to those in need.”

“The U.S. is a dream country,” Kayode told The New York Times. “Thank God I live in the greatest city in the world, which is New York, New York.”

Have we witnessed the beginning of a love story?

Hallmark has produced more than 300 holiday-themed movies over the past decade and they tend to be romantic comedies or stories about families that reunite around Christmas. The movies are meant to be comfort food on a cold winter’s night, so no one seems to mind that they’re filled with predictable plot lines and cliches.

Hallmark movies have become a big part of America's holiday tradition. Last year, more than 80 million people watched at least part of one.

Each film usually begins with a single woman in a small, quaint town having a meet-ugly or a meet-cute with her love interest. In a meet-ugly scenario, the boy and girl are either adversaries in a cause or inadvertently injure one another in a freak accident. If it's a meet-cute scenario, the two randomly run into each other and have an instant connection.

Regardless of how they meet, the couple falls for each other and then a major misunderstanding drives them apart before they are brought together again

Writer Shyla Watson went Christmas tree shopping on November 27 and inadvertently found herself in a situation that resembled the first act of a Hallmark holiday movie. Her tweet about it quickly went viral, receiving more than 72,000 likes.

We're the first generation to have educational programs molding our core memories.

Annie Reneau
"original-sesame-street-cast" by walt74 is licensed under CC BY-NC-SA 2.0.

Bob McGrath, one of the original "Sesame Street" actors, has passed away.

"A loaf of bread, a container of milk and a stick of butter."

It's a simple, repeated line from a one-minute sketch, but as a Gen Xer raised on public television, it's one of thousands of "Sesame Street" segments etched into my brain. Such memories still pop into my head at random times, clear as day, well into my forties. Bert singing about his oatmeal box while playing it like a drum. Kermit lamenting that it's not easy—but it is beautiful—being green. Buffy Saint-Marie breastfeeding her baby and explaining it to Big Bird. Mr. Hooper—the sweet, bow-tied man who ran the Sesame Street corner store—dying.

I was 8 when Mr. Hooper died. It was a big deal. I rewatched part of that episode recently to see what I'd think of it as an adult. The "Sesame Street" gang of 1983 handled it masterfully, helping us all process his unexpected death through Big Bird's own experience of learning about what it means to die.

Keep ReadingShow less
sesame street
Get stories worth sharing delivered to your inbox
By signing up you agree to Upworthy's privacy policy.
Trending Stories
kindness
Joy