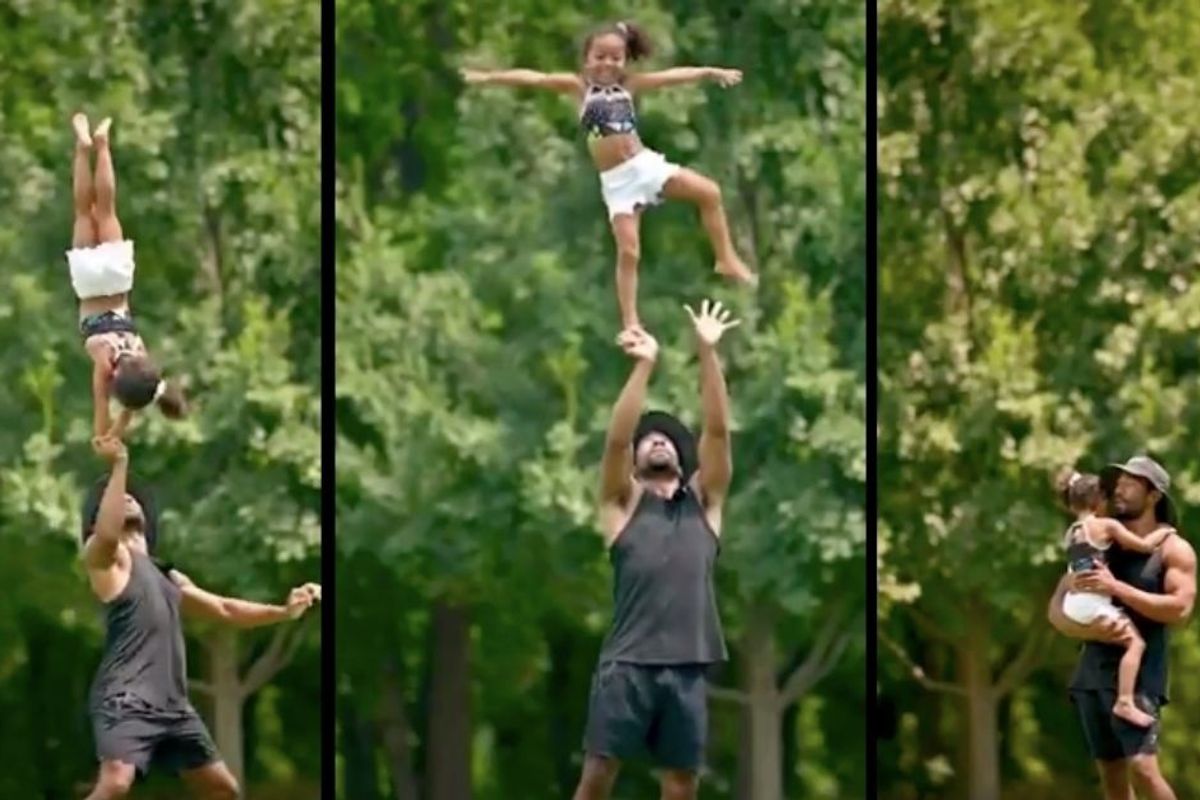 Roland Pollard and his 4-year-old daughter Jayden have been doing cheer and tumbling stunts together since Jayden could walk. When you see videos of their skills, the level of commitment is apparent—as is the supportive relationship this daddy has with his daughter.

Pollard, a former competitive cheerleader and cheer coach, told In The Know that he didn't expect Jayden to catch on to her flying skills at age 3, but she did. He said he never pressures her to perform stunts and that she enjoys it. And as a viral video of Jayden almost falling during a stunt shows, excelling at a skill requires good teaching—something Pollard appears to have mastered.

Twitter user Toya Rochelle shared a TikTok video of Pollard's in which Jayden makes a mistake on a move and falls. Pollard first checked to make sure she was okay. Then he matter-of-factly pointed out the mistake and explained the importance of listening to instructions, while also letting her know that he wasn't going to let her fall. "Daddy will always save you," he said.

Once she was calm and they'd talked through what happened, they tried again. This time, with success.

Another Twitter user pointed out that there was more video that followed this interaction, showing how sweet this dad-daughter duo's relationship really is. After a high-five and an "I'm so proud of you," Pollard asked if Jayden was ready to go get some ice cream, but she just wanted to go home and have some real food. Really, it's the little things in their exchange that are the sweetest. For instance, she accidentally kicks him when he puts her on his shoulders and says, "Sorry," and he instantly responds, "That's okay." So calm, so considerate. It's clear that there's no shortage of love, trust and security here.

Some watching the videos may feel that these kinds of cheer moves are too dangerous for a child. In an interview with E! News, Pollard explained that despite how the stunts may look to the public, he wouldn't let anything happen to Jayden.

"I believe that fear is a taught or learned trait and I've never given her a reason to be afraid," he said. "Any flyer I have trained knows that I will catch them if anything tragic goes wrong. She doesn't necessarily push me directly, but when I see she gets a skill down, I always try and make it harder. I love my daughter with all of my heart and would never put her at risk."

He also said he always tells her "Good job, mama!" after every stunt. "Before every stunt, I tell her I love her and give her a kiss for reassurance," he added. "We call it 'hardwood floor talk.'"