Christian Bale shares why white men should step aside in favor of diverse voices. 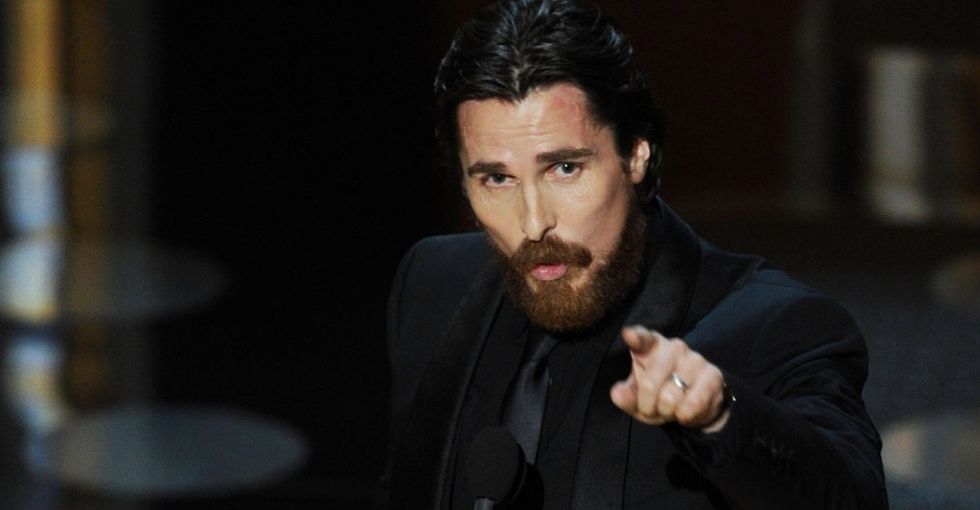 Christian Bale — aka Batman and one of America's most notable "psychos" — just said what we're all thinking when it comes to white men of privilege.

While doing press for his latest movie, "Hostiles," Bale and the film's costars dropped into the AOL series "Build" for an in-depth interview.

During the 30-minute conversation, the topic turned to the political state of the U.S. Bale doesn't see our divisiveness rooted in "red state/blue state" conflicts, but rather our lack of diverse voices, specifically in leadership.

“Our culture will be so much richer the day that we stop saying, ‘Hey, it’s all white dudes who are running things,’” Bale said.

"Whether that be Hollywood, whether that be Washington, you know. We’re going to get, in Hollywood, so much better films and so much more interesting stories being told and America will become the America that the rest of the world sees it as, that makes it unique."

Bale's belief that America can and will be better is rooted in love for his adopted country. The Englishman described the United States as "beautiful" and "brilliant."

Why is Bale spot-on? Privileged white dudes stole this country from Native Americans and built it on the backs of black and brown labor, while setting themselves and their descendants up to benefit.

White dudes gave us the Three-Fifths Compromise, the Trail of Tears, the Great Depression, internment camps, the War on Drugs, the NRA, "Dilbert" and Uber.

Sure, they gave us some good things too (looking in your direction, "Home Alone"). But after more than 241 years of running the country and almost every industry in it, perhaps it's best to let women and people of color take the reins for a while.

And while Christian Bale may seem like a surprising man to applaud, given previous allegations of misconduct, in this case and at this moment in time, he's right.

I'm not proposing anyone build a statue in his honor — or even forgive his past behavior.

But more white men of privilege should speak out with the conviction and honesty he did and work to make this country a better place for everyone, especially people too often left out out of the conversation. (Looking at you, Matt Damon.)

What we need more is new ideas and fresh voices.

More women. More people of color. More LGBTQ people. More people with disabilities. More people living below the poverty line. More immigrants. More of everyone who makes this country so unique and beautiful.

And please — at least for a while — fewer white men making decisions for the rest of us.

Patton Oswalt and his fans transformed a Twitter troll's life with a simple but powerful act of kindness.

Actor and comedian Patton Oswalt has made a name for himself off screen as a blunt yet caring, compassionate human. His raw openness after his wife's unexpected passing and his willingness to engage in conversations about depression and dadhood after her death has touched people's hearts and opened people's minds.

And once again on Twitter, Oswalt has proven that he is unquestionably one of the most kind-hearted dudes in Hollywood.