A girl's love of painting fingernails sparked a global movement against child abuse. 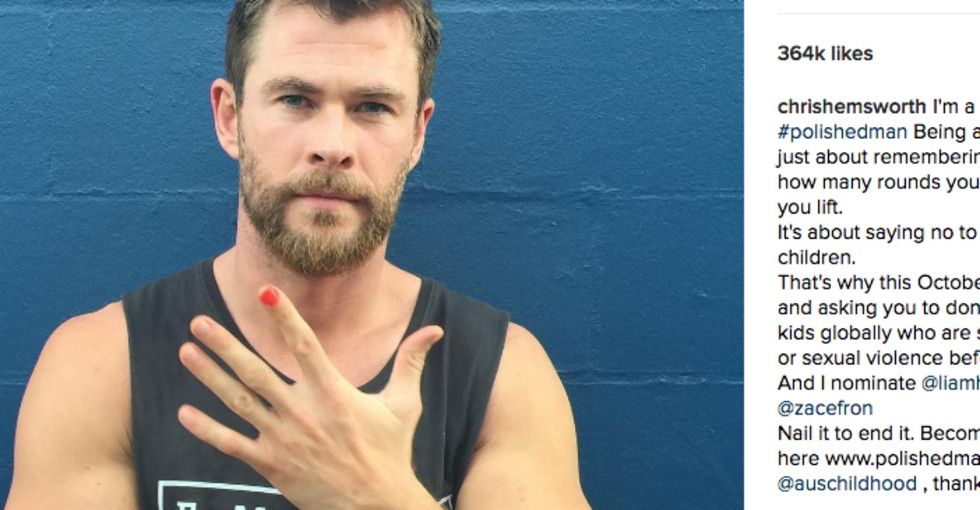 Elliot Costello met Thea in 2013 after she'd been rescued from two years of physical and sexual abuse in a Cambodian orphanage.

Thea ended up there after her father, the family's sole breadwinner, died. Losing her father wasn't just an emotional loss for the family — it was a financial one, too. His death meant that Thea's mother could no longer provide for Thea in the way she deserved.

When Elliot met Thea at Hagar International, a safe space for women and children who've survived abuse and exploitation, the language barrier meant they didn't say much to each other, but her story changed his life no less.

"What really should have been a safe passage was anything but,” Costello said of Thea's experiences in the orphanage. “It struck me."

Unable to communicate with each other, the two ended up playing games instead.

At one point, Thea used a marker to color all over Costello's hands and fingernails. The lighthearted fun ended up sparking the idea for a global movement.

That's why actor Chris Hemsworth decided to paint one fingernail on Oct. 9, 2016 — to help give a voice to kids like Thea around the world.

Hemsworth is a proud supporter of the Polished Man project — an initiative launched by Costello, the CEO of YGAP, to end violence against children after the social entrepreneur's eye-opening experience with Thea in Cambodia.

I'm a @YGAP #polishedman Being a @PolishedMan isn't just about remembering to buy flowers, how many rounds you shout, or how much you lift. It's about saying no to violence against children. That's why this October I'm painting my nail and asking you to donate to help the 1 in 5 kids globally who are subjected to physical or sexual violence before they turn 18. And I nominate @liamhemsworth @zacefron Nail it to end it. Become a polished man here www.polishedman.com @auschildhood , thanks to @laurapanton

"Being a [Polished Man] isn't just about remembering to buy flowers, how many rounds you shout, or how much you lift," Hemsworth wrote in the caption. "It's about saying no to violence against children."

Hemsworth, the most notable face to champion the cause, has elevated the campaign on a global scale.

The premise of Polished Man is pretty simple.

Guys are encouraged to sign up to get a profile on Polished Man's website, paint a fingernail that acts as a conversation starter, then direct supporters to their page to learn more and donate to the cause.

Funds raised for the campaign go toward programs run by various groups, like World Vision Australia and Hagar International, that help kids with trauma relief and prevent abuse for other young ones living at risk.

The campaign, which runs through October, is resonating with men everywhere: As of Oct. 10, the campaign had raised over $435,000.

My dad painted his nail for awareness against sexual abuse!I got the best dad in the world he will paint his nail t… https://t.co/CEikZB4KkL
— Sophia Casarez (@Sophia Casarez)1476073445.0

According to the World Health Organization, an alarming 25% of all adults report being physically abused as a child. What's more, 1 in 13 men and 1 in 5 women say they were sexually abused as a kid. These are issues that silently affect far too many of us.

The campaign is targeting men because men are overwhelmingly responsible for sexual and physical violence against minors.

As the campaign notes, about 90% of all abusers of children around the world are men. So while women are certainly encouraged to speak up and donate to the Polished Man project, the initiative's pretty clear: Men, it's largely on us to prevent this atrocity from happening.

Hemsworth wants all of us — including some of his fellow A-listers — to step up to the plate for kids at home and around the globe.

In his Instagram post, Hemsworth asks his brother, actor Liam Hemsworth, along with Zac Efron, to join the campaign by also painting their fingernails. (The ball's in your court, guys).

But even if you don't have millions of Instagram followers, remember that your voice can make a difference ... one man-i-cure at a time.

Learn more about becoming a Polished Man and the realities of worldwide child abuse on the project's website.