China is building another great wall — of trees. To hold back the desert. 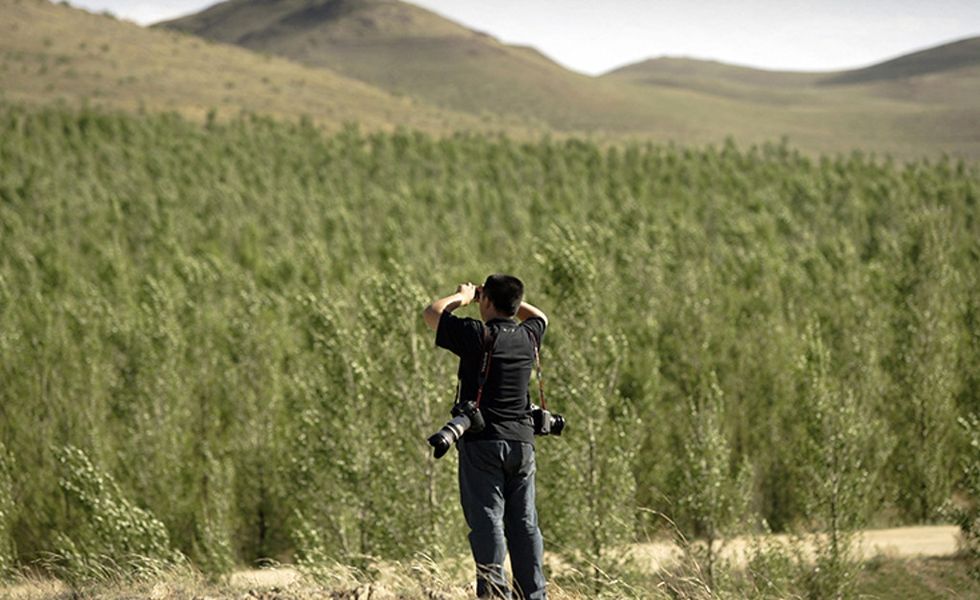 As of this writing, the Gobi Desert in northern China/southern Mongolia is about half a million square miles (1.3 million km2) in area.

Yes, that's “as of this writing" — because the Gobi Desert is growing.

Due to something called “desertification," about 1,400 square miles (3,600 km2) of China's otherwise arable land is turned into desert each year, as the Gobi creeps further and further south.

To make matters worse, winds often pick up the sand, blowing it toward the densely populated areas in China, resulting in immense dust storms. (Here's a picture of a car windshield after Beijing's 2006 dust storm season.)

The desert in China is expanding — kinda rapidly, too. Image by Frederic J. Brown/AFP/Getty Images.

But China is fighting back. With trees.

In 2001, the BBC reported on what has been called, colloquially, the "Great Green Wall," a not-so-subtle reference to the Great Wall of China, but this "wall" is being made of trees.

The wall is part of a decades-long afforestation project that began in 1978 but isn't expected to be completed until 2050, and it hopes to ultimately make areas currently too arid for habitation or agriculture into fertile homes to both.

A tree-planting exercise on the edge of the Gobi Desert in 2007. Image by Peter Parks/AFP/Getty Images.

One of the early phases was a forced participation drive — in 1981, China passed a law that required its citizens over the age of 11 to plant three to five trees each year — but in 2003, the country turned toward government works.

The Great Green Wall plan called for the creation of a 2,800 mile-long (4,480 km) belt of trees along the Gobi's border.

As Wired reported a year later, this was no small task:

"To build the wall, the government has launched a two-pronged plan: Use aerial seeding to cover wide swaths of land where the soil is less arid and pay farmers to plant trees and shrubs in areas that require closer attention. A $1.2 billion oversight system, consisting of mapping and land-surveillance databases, will be implemented. The government has also hammered out a dust-monitoring network with Japan and Korea."

A photographer looks out over the trees at the encroaching desert. Image by Peter Parks/AFP/Getty Images.

Whether it's working, though, is another question.

And in 2014, the Daily Mail echoed these results, reporting that "a study says the measures are working, despite previous criticism."

However, that same year, the Economist noted that many of the trees are withering in the dry, hot conditions and concluded the opposite.

Finally, there's the middle ground, which the BBC reported in 2011: The afforestation process is working — but it'll take 300 years to reclaim the lands the Gobi has already taken.

Either way, China intends to push forward. Given its original timetable, they have 35 years left to figure it out.