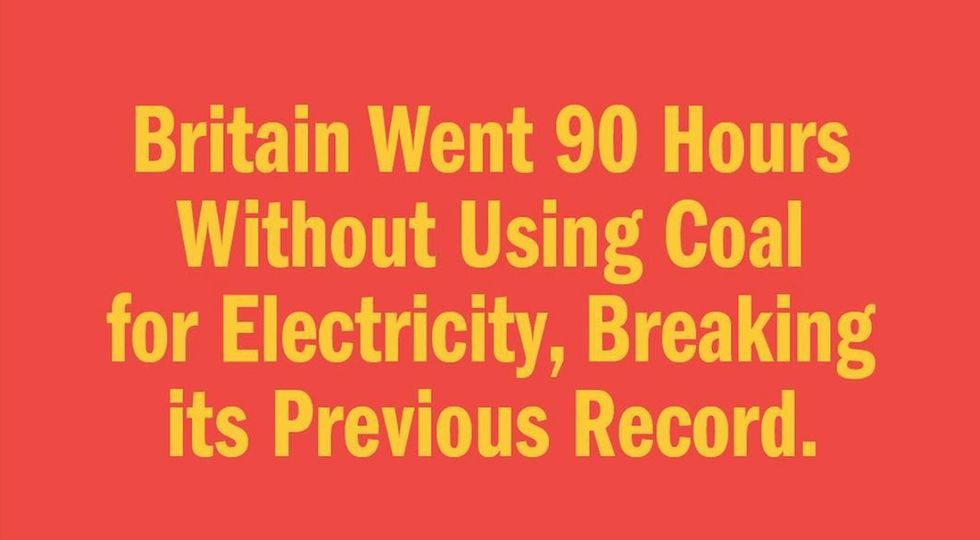 TheUK has just completed a full week without using coal, for the first time since the first coal-fired power station for public use was opened in London in 1882.

The National Grid Electricity System Operator (ESO) said on Twitter that at 1.24 p.m. on Wednesday, the UK had officially gone 168 hours without coal — seven days exactly.

“While this is the first time this has happened, I predict it will become the new normal,” said Fintan Slye, director of ESO, in a statement.

The new 168-hour record significantly beats the previous record for UK electricity generation without coal — which was reportedly set over Easter weekend, when the UK went 90 hours and 45 minutes without coal.

It means that overall in 2019, the UK hasgone over 1,000 hours without coal — reportedly putting the country on track to beat all of itsprevious annual records.

Coal is one of the worst contributors to carbon emissions and global warming.

BusinessSecretary Greg Clark said this was a “huge leap forward in our world-leading efforts to reduce emissions, but we’re not stopping there.

“We’re now on a path to become the first major economy to legislate for net zero emissions,” he added.

Clark was referring to the Committee on Climate Change (CCC) recommended targets for Britain, which were published last week.

The CCC, the independent adviser to the government on climate change, called on the UK to set legally-binding targets to cut carbon emissions to nearly zero by 2050, including emissions from aviation and shipping.

Hitting these targets would “stop the UK’s contribution to global warming” and would be achievable at low cost through UK domestic effort, according to the CCC.

A temperature rise of 1.5 degrees Celsius by 2100 is considered the threshold for dangerous levels of climate change and, according to the CCC, if we’re going to stay below that rise we need global greenhouse emissions to hit zero by 2070 — and carbon dioxide (CO2)emissions need to be at zero by around 2050.

“As more and more renewables come onto our energy system, weekends likethis are going to increasingly seem like the ‘new normal,’” a National Grid ESO spokesperson told the Independent, about the latest coal-free record.

“We believe that by 2025 we will be able to fully operate Great Britain’s electricity system with zero carbon,” the spokesperson added.

“The transformation of how we get the energy to heat our homes and power our work is a massive change, but the advantages it brings in terms of green energy far outweigh any challenges,” they said.

Total coal power use for Britain has fallen by almost two-thirds for thefirst months of this year, compared to the same four month period in2018, according to BusinessGreen.

There are now reportedly just six coal-fired power stations operational in the UK, which are mainly used for back up during peak demand or when supplies drop from other means.

Back in 2014, coal was the main energy source for Britain, but it is now sixth on the list —behind gas, nuclear, wind, imports, and biomass.

Britain and Canada joined forces in 2017 to launch thePowering Past Coal Alliance, which is a voluntary coalition of governments, businesses, and other organizations.

As part of this, the UK pledged to close all of its coal power stations by 2025, and Canada pledged to do the same by 2030. There are now 80 members of the coalition, reported BusinessGreen.

But concerns have been raised about the increasing reliance on gas, given that it’s also a fossil fuel — although less harmful than coal.

The2008 Climate Change Act requires greenhouse gas emissions to be reduced by 80% compared with 1990 levels by 2050.

Muna Suleiman, climate campaigner at Friends of the Earth, told the BBC: “Electricity generated by renewable sources is a key part of the fight against climate chaos so it’s time to remove all the blockers to renewable energy.”

She added: “The government must prioritize the development of sources such as solar and onshore wind.”

This article originally appeared on Global Citizen. You can read it here.

Philadelphia is taking the city back to the past.

Remember when calling your parents, a tow truck or a friend when you were out and about meant digging in your pocket for a quarter to make a pay phone call? Well, a Philadelphia-based collective, PhilTel, is jumping into the past with a modern twist, by installing free-to-use pay phones throughout the city.

Of course, the pay phones that many of us grew up were removed from public places years ago. There no longer seemed to be a need for them when most people had a phone in their pocket or in their hand. But it's easy to forget that not everyone has or wants that luxury. For some people, staying that connected all the time can be too much and for others, it's simply financially impossible to own a cell phone.

Keep ReadingShow less
Get stories worth sharing delivered to your inbox
By signing up you agree to Upworthy's privacy policy.
popular

Think all cats are the same? These pictures prove they each have their own personality

Photographer Nils Jacobi shows how cats aren't nearly as aloof as one might think.

People often mistakingly attribute a singular personality to cats—usually the words "aloof" or "snobby" are used to describe them. At best, they might be given the "evil genius" label. But in actuality, no two cats are alike. Each has their own distinct ways of being, whether that’s silly, sophisticated, affectionate, downright diabolical or somewhere in between.

This photographer has the pictures to prove it.

Nils Jacobi, better known online as furryfritz, the catographer, has photographed literally thousands upon thousands of cats—from Maine coons who look like they should be in a perfume ad to tabbies in full-on derp mode.
Keep ReadingShow less
Get stories worth sharing delivered to your inbox
By signing up you agree to Upworthy's privacy policy.
Trending Stories
lost items
Joy