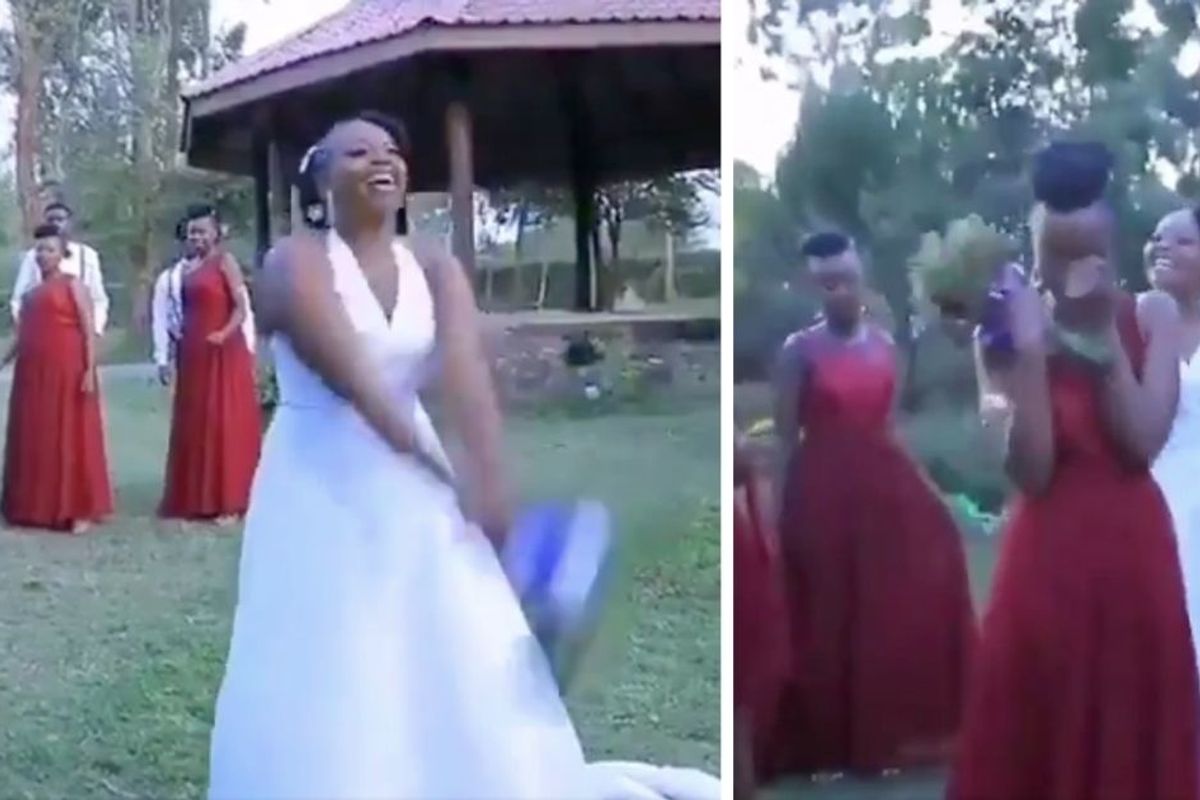 It's a well-known standard of etiquette that you don't upstage a bride at her wedding. You should dress up and look nice, but not fancier than the bride. And you certainly shouldn't draw attention to yourself with a big announcement, taking the attention away from the big day and turning it onto yourself.

But what if the bride does that for you?

A video shared by @_BlackCouples and reshared by @RexChapman starts with a bride with her back to her line of bridesmaids, preparing to toss the bouquet. Traditionally, the woman who catches the bouquet is supposed to be the next one to tie the knot. But as this bride is about to toss the flowers, she stops.

Then she turns around, shakes her head, and starts walking toward one of her bridesmaids.

The bridesmaid clearly has no idea what's going on, and when the bride hands her the bouquet she just giggles. Then the bride spins her around to her boyfriend, who is down on one knee, holding up a ring. Aw, dang.

The joy of the whole wedding party is palpable as the bridesmaid squeals and then starts to cry. Her boyfriend's grin could not be wider, and the bride herself is beaming behind her friend.

Some people commented on the video saying they'd be upset if a friend stole their thunder with a stunt like that on their big day, but it's clear that the bride was 100% in on it. It's not like she was taken by surprise, which would have been tacky. There are stories of clueless people staging their own big moment during someone's wedding reception, and such stories are always super cringey.

But this wasn't that. This looks like a beautiful group of friends sharing not just one, but two very special events in their lives at the same time. The bride selflessly shared the spotlight on her big day, and in doing so got to play a significant role in someone else's love story as well—someone that she clearly cares a lot about to want to surprise her like that at such an iconic moment.

The video clearly hit people right in their soft spots, perhaps especially right now when so many of us have had to miss out on attending our loved ones' weddings. It's not clear when this wedding took place, but it's presumably from before the pandemic. These are the kinds of moments we long to see again, when we can safely hold big gatherings, when don't have to wear masks and mentally measure six feet constantly, when we can hug our loved ones with wild abandon.

Until that normalcy returns, we'll just have to live vicariously through these kinds of inspiring, feel-good videos.

From Your Site Articles
Related Articles Around the Web
friendship