Bill Nye is pulling out all the stops when he talks about climate change. It's glorious. 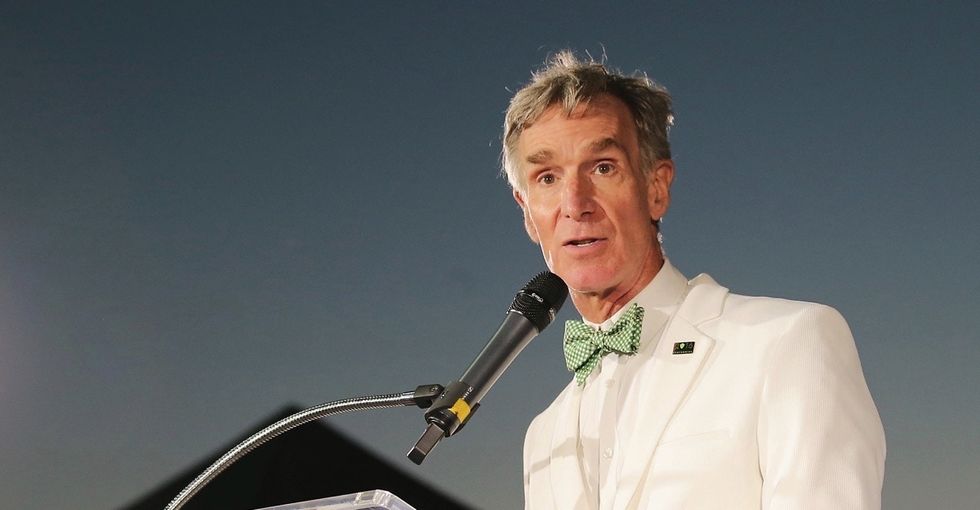 Bill Nye is basically a living touchstone for every millennial science kid (unless you grew up watching Beakman's World, which had fewer music videos and more giant rat costumes).

While he was there, Nye extolled the virtues of the national parks while also calling out one of their biggest threats: climate change.

Though the days of on-air experiments and catchy theme songs are now nearly two decades past, Nye has never stopped speaking out about science and reason. And one of the key features of that mission is to keep people aware of how our planet is changing.

"I just got back from Glacier National Park, and there are only a few glaciers left. And the official word is by 2030, they'll all be gone," Nye told The Verge in an interview. "But the park rangers I spoke with — a dozen park rangers over the course of a few days — no, no, five, six, seven years, certainly by 2025, all the glaciers will be gone."

Nye has been on a hot streak lately in his fight against climate change. Here's what he's been up to:

Nye went on CNN to call out the link between climate change and current natural disasters.

After appearing at Brooklyn Bridge Park, Nye stopped by CNN to call out the link between climate change and flooding in Louisiana.

"For us on my side of this, this is a result of climate change," Nye told CNN about the recent flooding in Louisiana. "It's only going to get worse."

Though we can't say whether any specific weather phenomenon would or would not have happened without man-made climate changes, it's true that experts are predicting more frequent and more severe floods, droughts, storms, and heat waves as the atmosphere changes.

He ended the interview with a little jab at CNN, whose anchors haven't always supported the science.

Back in July, Nye teamed up with Vocativ to debunk climate myths.

Vocativ dredged up some of the most common arguments against climate change science and posed them to Nye in an entertaining — if a little heavily produced — video. In it he tackles questions about volcanoes, sun cycles, and even pig farts!

In April, Nye put his money where his mouth is while confronting those who reject climate science.

Looks like he's being proven right, by the way. 2016 is on pace to be the hottest year in recorded history.

It's not all doom and gloom, though. Nye knows of a simple thing we can all do to help fight climate change: vote.

"Vote, that's my message. You have to vote. Take your responsibility to vote seriously," Nye told The Verge in Brooklyn Bridge Park.

While Nye declined to say who he thought people should vote for, he encouraged people to take the environment into account while voting this year.

Nye was the voice of science in my childhood, and he's still a tremendous voice of reason today.

His plea for us to vote really matters — this year, our elections have some of the most clearly divided candidates on climate change and science in history.

So if things like heading off greater natural disasters and preserving our natural parks matter to you, listen to Bill Nye: This is the year to do something about it.