At first, he was afraid to sing. Now it's helping him heal his emotional wounds. 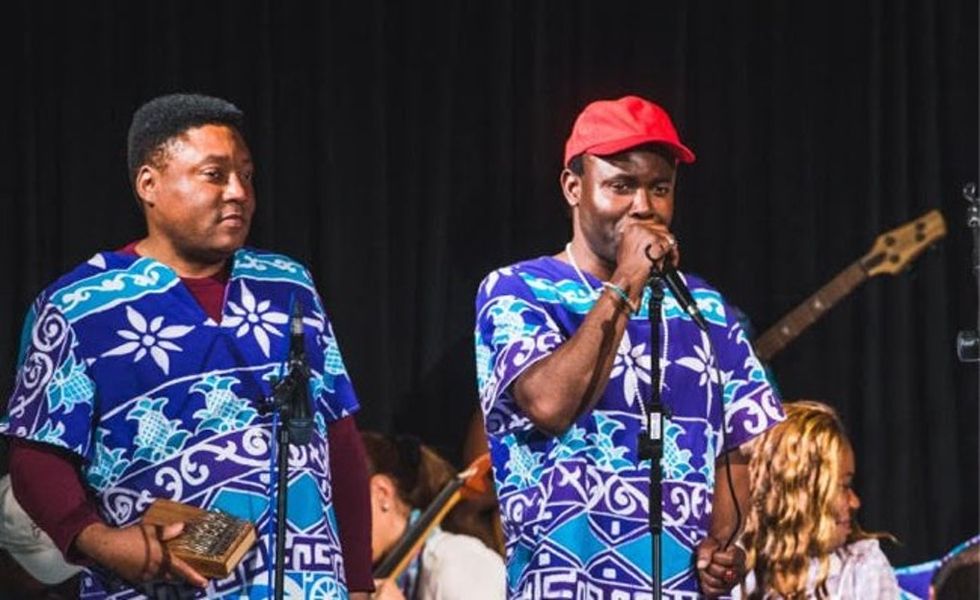 In 2011, Alexander* was arrested and tortured for protesting in his home country of Iran.

He fled to England with his wife and children and applied for refugee status. But even though he and his family were safe, he was still suffering from post-traumatic stress disorder and chronic pain.

Then, in 2013, something unexpected changed the course of his life.

Created through a partnership between Music Action International and Freedom from Torture, Stone Flowers is a unique project that supports refugee torture survivors through psychological and physical therapy, help in securing protection in the U.K., welfare services information … and music.

Stone Flowers artists come together each week, write songs about their difficult experiences, and perform them as a way to raise awareness and heal their painful pasts. The organization works with people from all over the world, including Iran, Sudan, the Dominican Republic, Kuwait, and beyond.

At first, Alexander wasn't sure about joining the group.

In an article for Therapy Today, Alexander said:

"I was hesitant ... but, once I took the plunge, the warmth of my welcome into the group blew me away. ... There was no pressure from my new colleagues to tell my story — simply a deep, unspoken respect among all the group members for what we'd all been through."

In time, Alexander did tell his story. His pivotal moment came when he finally got the courage to sing:

"I managed to sing a song aloud in my own language. That was so liberating and moving for me. Despite everything I'd been through, with a combination of the music group and therapy, I began to believe in a better future for me and my family."

He eventually wrote a song called "The Memory" about the abuse he suffered in Iran.

Music Action International's U.K. founder, Lis Murphy, is involved in the music therapy meetings with Alexander and the other members.

She also helps the performers establish all vocal and instrument arrangements and prepare them for formal recording sessions. Stone Flowers performs at local events in the U.K., including Peace Week in Manchester, the Manchester Food and Drink Festival, and their own album release this past June.

For Lis, the work is profoundly rewarding. As she explained to me:

"Performing and working with Stone Flowers is a truly amazing experience. To see firsthand how music enables people who have survived unbearable situations, to stand together and share their hopes, fears and joys in communities where there is often hostility towards them is very powerful."

The work they're doing is having a serious effect. Like Alexander, Stone Flowers member Lito fled persecution in his home country (the Democratic Republic of Congo) before he found safety in the U.K.

Lito discovered that performing with his newfound friends reminded him that he has a purpose and that there are better days ahead:

"After the performance I've always tried to keep them feelings with me at all times. Because it's the only feeling that reminds me of who I am and what I am and that I live for now, for what happens tomorrow I do not know — it's out of my reach. Therefore it's fair to say the group has transformed me and gave me a special mechanism and therapy."

The Stone Flowers project is on to something, especially because group singing has been shown to help people cope with stress and trauma by releasing oxytocin and elevating endorphins.

Alexander's life looks pretty different these days. He says his involvement in Stone Flowers has helped him heal his emotional wounds and improve his relationship with his family.

"The group has a power and personality of its own and a power to help with the healing process. … My life partner and my children began to sense a difference in my behaviour; I felt able to be more present with them."

Stone Flowers now has 35 active members and is still going strong with "Ngunda," a new album filled with storytelling songs like the one Alexander wrote.

And it sounds like there may be more albums in the future.

As Lis puts it: "The quality of the creative material that has been produced has exceeded all our expectations. Each individual has something really important to say and the music they have written to express this is incredibly powerful."

Check out this intimate video of a Stone Flowers studio session:

A gut-wrenching story shared by a Yosemite park ranger shows why it's so important for people to be mindful of surrounding wildlife.

Last week, the national park shared the first-hand account of a park ranger who took care of the body of a dead bear cub that was struck by a car. Sadly, the ranger says that it happens far too often in Yosemite. "I try to remember how many times I've done this now and, truthfully, I don't know. This is not what any of us signs up for, but it's a part of the job nonetheless," the ranger wrote.

Keep Reading Show less
national parks
Get stories worth sharing delivered to your inbox
By signing up you agree to Upworthy's privacy policy.
Trending Stories
Family