Architects in Ho Chi Minh City were asked to design a university campus. The outcome is magnificent.

It's called 'verdant design,' and it's amazing. 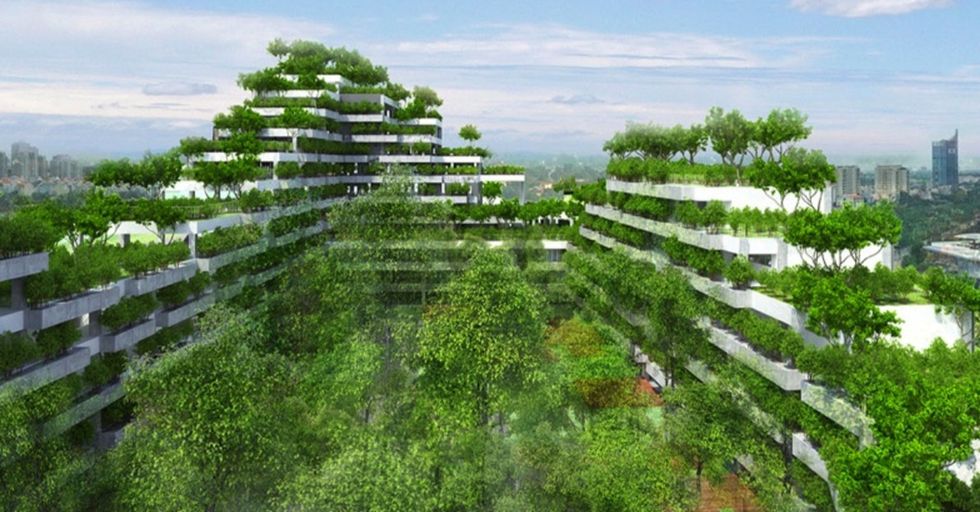 It occupies the easternmost coast of the Indochina Peninsula in Southeast Asia.

Located in southern Vietnam, it's the country's largest city, with a population of almost 8 million people.

And here's what Ho Chi Minh City looks like.

It's a big city with big buildings and lots of people, which makes for many a challenge.

"Cities, especially in thriving countries like Vietnam, are growing at such a speed that infrastructure is unable to keep pace," said the team at Vo Trong Nghia Architects in an interview with Dezeen Magazine. "Environmental stress is observable through frequent energy shortages, increased pollution, rising temperatures, and reduced greenery."

When the architects were asked to design a new urban university campus in Ho Chi Minh City, they had something radically non-urban in mind.

What they produced was a verdant design — grassy, leafy, nature-inspired. It's like a city within a city, intentionally overrun by vegetation.

Welcome to the jungle, kids. All images by Vo Trong Nghia Architects/FPT University.

The firm, which specializes in green architecture, is bringing their expertise to FPT University, a private university in Ho Chi Minh City, for the second time. Their first project is currently under construction in Hanoi.

They describe their approach as a blend of culture and sustainability:

"By experimenting with light, wind and water, and by using natural and local materials, Vo Trong Nghia Architects employ a contemporary design vocabulary to explore new ways to create green architecture for the 21st century, whilst maintaining the essence of Asian architectural expression."

Their design for the university stands out against Ho Chi Minh City's built-up urban sprawl.

They wanted a different kind of sprawl — a 242,000 square-foot site that explodes with plant life. The centerpiece is a unique building stretching over several city blocks, its staggered floors climbing higher in the corners, and framing a massive courtyard.

They don't just use greenery to adorn the structure. Their concept actually relies on it.

Balconies and rooftops will be lined with plants, giving the building the appearance of "an undulating forested mountain growing out of the city."

Trees will spring from the courtyard.

And gardens will be planted at every step and turn.

All of this, according to the architects, "will provide shade and improve air quality, reducing the campus' reliance on air conditioning." And to save water, ground level gardens will seep into circulation wells that feed plants throughout the building.

They want to give Ho Chi Minh City "a new icon for sustainability."

Rapid urbanization has turned Ho Chi Minh City into a heat island, which is when cities grow warmer than their rural surroundings because land, plants, and forests have been replaced by heat-trapping concrete, brick, steel, and asphalt.

Today, say the architects, only 0.25% of the Ho Chi Minh City is covered with plant life. They think that while urbanization may be inevitable, turning our cities into ovens doesn't have to be.

So they get especially excited about designing educational facilities. To them, it's a chance to "aid the recovery of greenery that once flourished" and "foster a new generation of thinkers."

And if more students, like the future enrollees of FPT University's new campus, can be exposed to and learn to truly appreciate the astonishing form and function of nature, then there is, indeed, hope for the future of our cities — and our planet.