An actor's response to 'whitewashing' backlash shows the rest of Hollywood how it's done.

It's time to put an end to whitewashing in Hollywood. 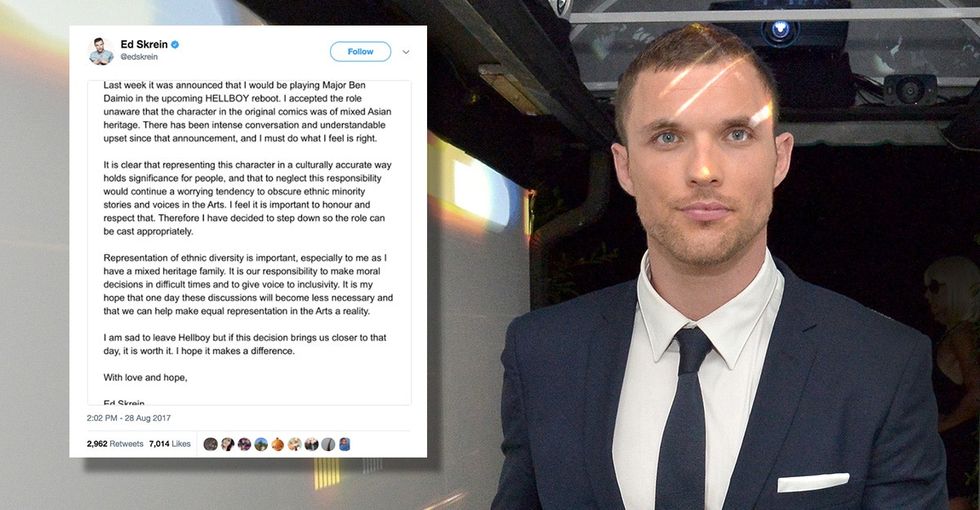 On Aug. 21, actor Ed Skrein announced that he had accepted a role in the upcoming "Hellboy" reboot. A week later, he dropped out — for a very good reason.

Skrein had been cast as Ben Daimio, an employee of the fictional Bureau for Paranormal Research and Defense. Best known for his role as Ajax in 2016's "Deadpool," Skrein seems like he'd be a great fit for what will likely be a high-energy, action-packed "Hellboy."

There was just one problem: The character, Daimio, is Japanese-American. Skrein is not. And Daimio's heritage plays a pretty huge role in his story.

Hollywood has a decades-long pattern of whitewashing Asian characters. Opting not to contribute to it, Skrein dropped out of the role.

Whether it's Matt Damon's bland performance in "The Great Wall," Emma Stone's confusing portrayal of a half-Asian woman in "Aloha," Scarlett Johansson's starring role in the recent "Ghost in the Shell" film, or any number of other examples of white actors being cast to play Asian roles, this isn't a new phenomenon.

It's the ugly cousin of "yellowface," the practice of casting white actors as Asian characters with prosthetics, makeup, and over-the-top bad accents.

Skrein announced via Twitter that after getting feedback from "Hellboy" fans, it would be best if he dropped out "so the role can be cast appropriately."

"It is clear that representing this character in a culturally accurate way holds significance for people, and that to neglect this responsibility would continue a worrying tendency to obscure ethnic minority stories and voices in the Arts," he wrote. "I feel it is important to honor and respect that."

He added, "Representation of ethnic diversity is important, especially to me as I have a mixed heritage family."

A 2014 photo of Skrein. Photo by Vittorio Zunino Celotto/Getty Images for ZFF.

Turning down that role wasn't an easy decision. Hopefully, however, it'll inspire other actors and directors to do the same.

It would have probably been pretty easy for Skrein to shrug off the criticism as simple oversensitivity, but instead, he decided to listen, show some empathy, and break the cycle.

Small acts of compassion have the potential to make a big impact on the world. Thanks to fans, diversity advocates, outspoken Asian actors, and Skrein, Hollywood now has a great opportunity to vocally pivot away from its history of Asian caricature and erasure, putting whitewashing behind us. Whether that will happen is anybody's guess, but sometimes it's worth celebrating life's little victories. Hopefully, the decision will pay dividends for Skrein, and he'll land something even bigger.