All of the unhelpful advice I got on how to get my daughter to 'sleep through the night.' 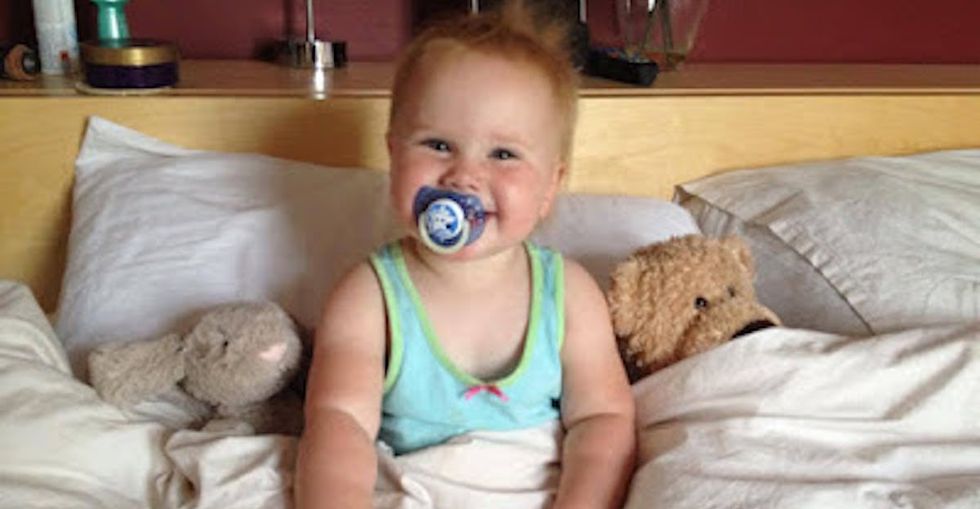 By the time my baby was 48 hours old, I was being told to keep her awake during the day so that she would sleep through the night.

By the time my daughter was 3 weeks old, I was being told to reduce the number of times I breastfed her and instead "top her up" with formula so that she was more likely to sleep through the night.

By the time my daughter was 4 months old, I was being told to give her a bottle of baby cereal to fill up her tiny tummy. You know, so that she might sleep through the night.

By the time my daughter was 9 months old, I was being told to "let her cry it out" — you guessed it, so that she might just sleep through the night.

I didn't actually follow any of this unsolicited advice, so you'd think that it had no effect on me, right? Yet as I type these words, I can feel a hot wave of anger pulsing through me.

How is it possible that such unqualified advice is being reeled off to vulnerable new mothers as though it's some sort of edict?

Because I was anything but empowered. I was scared — absolutely terrified — that I was somehow screwing up this mothering gig. I listened to these snippets of never-ending advice, and as I disregarded each one, I felt more and more alone: Was I really the only mother in the world who wasn't following this particular book? Was I actually the only mom whose child didn't sleep through the night, and was it somehow my fault for not following these unnatural-sounding "rules"?

I felt isolated and riddled with self-doubt. And on top of that, I was bone-crushingly exhausted.

But then one sleepless night, as I sat nursing my baby girl, I skimmed through some comments in a mommy group on Facebook. It was the wee hours of the morning, and people other than me were still awake. Not only that — this obsessive concept of sleeping through the night was also plaguing them. They agreed that it's presented as nothing short of the Holy Grail of motherhood, something upon which to precariously balance our ever-diminishing fragile self-worth as mothers. But not everyone was playing the game.

One comment stood out to me, and I can still picture the words clearly, all these years later: "I'm 26, and I don't sleep through the night. Why should I expect my baby to?"

As I read these simple words, I felt a slight lift in my exhaustion, so I read them again. And again.

There were other moms out there who were following their instincts and who even felt confident in doing so. That realization felt like magic.

From that point on, I found the courage to use my voice. I learned to stop people's unsolicited counsel in its tracks, and I found a group of moms who could relate to me and my sleepless adventures instead of inundating me with advice I didn't ask for.

The thing is, the concept of sleeping through the night is a brand worth millions. And the companies selling sleep products and sleep advice need us to keep obsessing over this elusive milestone so that they can keep on profiting from our exhaustion.

But here's what I say: Screw them and their expensive sleepy stardust. Because we aren't just ignoring the lady at the pharmacy or an ill-advised relative when we withdraw from the sleep game; we're inadvertently ignoring an entire industry. Let's be clear — that takes remarkable strength. When every dialogue we have about sleep is centered on this one ideal of sleeping through the night, it's hard to see through the bull and follow our mommy instincts.

So in case you, too, have lately been plagued by the pressure of getting your baby to sleep through the night, I have a message for you.

Keeping a baby awake during the day, swapping breastfeeds for formula feeds, filling a baby's tiny tummy with cereal, or letting them "cry it out" might work wonders for some babies and parents. But certainly none of those are universal truths. (In fact, some even have known health consequences and go against the advice of they-know-more-than-us advisers like the World Health Organization.) So if they don't work for you and your family, that's OK.

Moms, do yourselves a favor and trust your instincts.

Trust your babies. Most of them will take an eternity to sleep through the night. Let’s collectively embrace this concept of normal infant sleep and find ways to accept, cope with, and thrive on what little sleep we are granted.