After a lawyer's racist rant went viral, a mariachi band showed up outside his apartment. 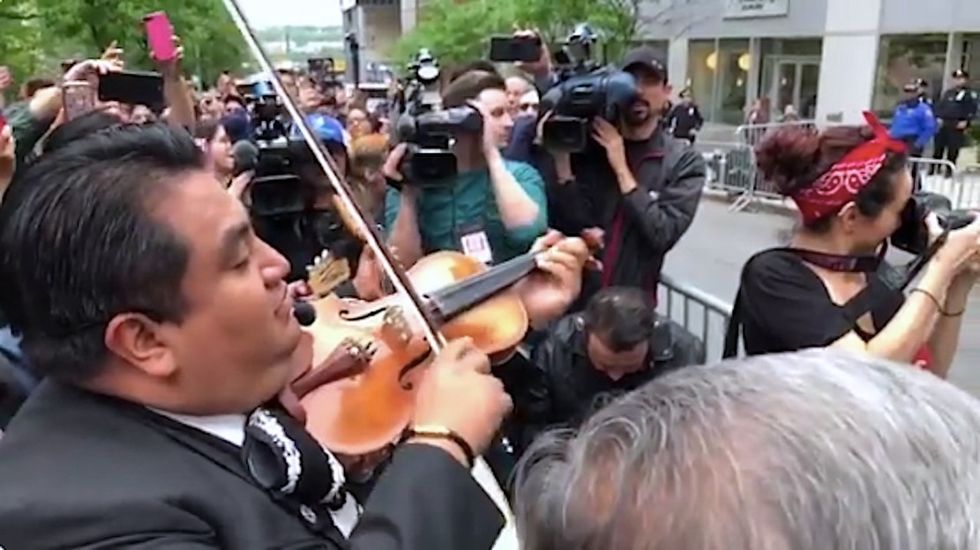 Aaron Schlossberg may not lose his license to practice law, but he still has had to face the music.

After being caught on camera in a threatening and racist rant against restaurant employees who were speaking Spanish, critics are calling for the New York attorney to lose his ability to practice law.

While that's unlikely to happen, he's still endured real consequences of losing his office space, generating a ton of one-star Yelp reviews, and facing an avalanche of very public criticism from a united Latinx community and countless allies who are saying "no" to his xenophobic rant.

That response culminated when a group of local activists organized a community event, highlighted by a mariachi band that played music like "La Cucaracha" outside Schlossberg's Manhattan apartment.

New York City residents have loudly responded by saying there's no place for racism and intolerance in their city.

And they're weighing in with their wallets, too. A GoFundMe campaign launched to raise $500 for the mariachi band raised more than twice that amount in just a few hours. In fact, the band reportedly offered to perform for free, and some of the extra funds were used to bring food to the event.

The GoFundMe organizers quickly cut off the donations button and instead asked those who wanted to help to contribute directly to The Immigrant Defense Project, a nonprofit that helps provide legal counsel and representation for undocumented people facing deportation.

The message of unity that arose from the incident is important.

It might be more immediately satisfying to see Schlossberg punished for his outlandish behavior, but sending a powerful message of unity in response is likely to have a greater impact than any professional consequences endured by one bad apple.

This incident is a good reminder that the United States has no official language. While most Americans consider English their primary language, as the saying goes: We are still a nation of immigrants, even if the current administration thinks otherwise.

People are angry, and that's understandable. But a response like this will have a lasting impact.

Schlossberg used his privilege to threaten and demean others without provocation. We still don't even know if the employees were citizens, immigrants, or undocumented. And in the most fundamental way, it does not matter.

They were simply doing their jobs like most of us do on any given day. Everyone has to eat, and most of us have to work.

That's why the overwhelming response to Schlossberg is far more important than his heinous act itself. A message of inclusion, unity, and tolerance is winning out, and it's one that won't be ignored.