Adults drop their wallets next to kids to see what they will do. It's a beautiful experiment.

Small acts of kindness can go a long way. 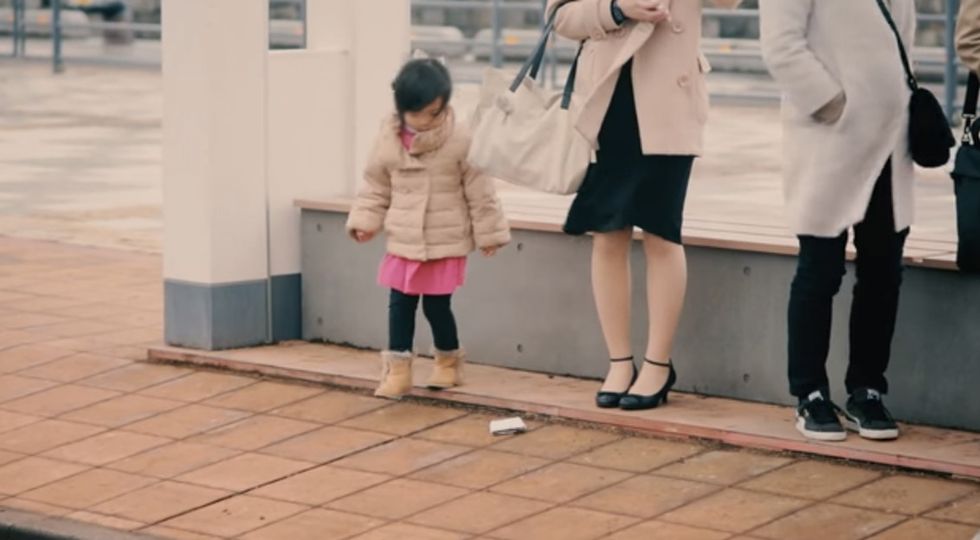 Are kids born with a sense of right and wrong?

Or is that something we develop along the way?

I certainly spent much of my childhood selfishly yelling, "Finders keepers, losers weepers!" or "It's mine, I found it first!" — anything to claim victory before my sister beat me to it. And I'm sure I wasn't the only little kid who wanted to keep things for myself no matter the cost. (Right, guys?)

Hey kid. I see you seeing that. All GIFs via Japanese Red Cross.

Here's what they were testing: When kids are by themselves and a stranger next to them drops a wallet, what will the kids do? Will they take the wallet, leave it, or let the person know?

And it's not just about the wallet. It's about helping others. It's about what's morally right and wrong. And it's about young kids who are all just figuring it out as they go.

The way these kids reacted gave me loads of hope for our future.

When each kid saw a wallet dropped next to them, they hesitated for a second.

Some looked around or quietly tried to alert the stranger whose wallet was dropped.

But they all eventually broke through their shyness and uncertainty to do the thing they knew was right: They alerted the stranger to the dropped wallet. Every. Single. Kid.

The kindness of little kids has even been proven by science.

According to research conducted at Yale University's Infant Cognition Center, babies can identify mean behavior (in puppets) when they're just three months old. Not only that, but when given the choice, they'd rather hang out with the, um, puppets with nicer behavior.

This experiment is a heartwarming and beautiful display of what happens when we look out not only for ourselves, but for each other.

Doing the right thing can have such a huge impact — no matter how big or small the situation may seem. Heck, it might even be the natural thing to do!