A young paralyzed man just walked again after having an electrode implanted in his back. 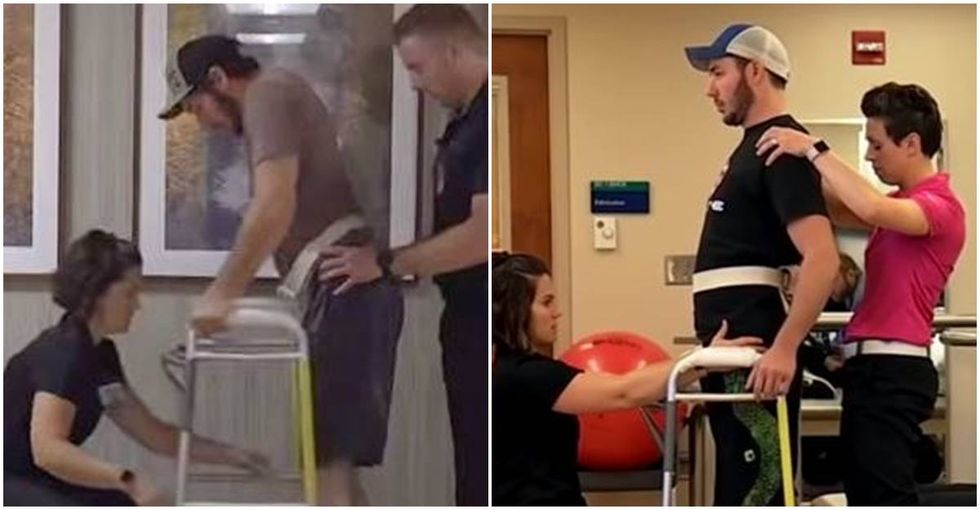 Doctors at the Mayo Clinic in Minnesota have helped a paralyzed man walk 100 yards with the aid of a walker after implanting a remote-controlled electrode in his back.

Jered Chinnock, 29, was paralyzed five years ago after a devastating snowmobile accident left him with no movement or sensation below his mid-back. But after 43 weeks of intense rehab, and the help of the electrode, he was able to walk again.

Researchers at the Mayo Clinic implanted a battery in his abdomen to power the spinal-nerve stimulating electrode.

If the electrode is turned off or loses power, Chinnock can no longer stand.

“The walking side of it isn’t something where I just leave my wheelchair behind and away I go,” Chinnock, of Tomah, Wisconsin, told The Associated Press. But, “there is the hopeful side of, maybe I’ll gain that — where I can leave the wheelchair behind, even if it is to walk to the refrigerator.”

After 25 weeks of therapy Chinnock was able to take his first steps without a harness and since, he has walked over 100 yards and done so continuously for as long as 16 minutes.

“The reason why this is important is because the patient’s own mind, thought, was able to drive movement in his legs,” Dr Kendall Lee, who co-led the Mayo Clinic team, told The Independent. “Just as important is that we were able to get him to stand independently and take his own steps.”

While the study's initial results are promising, researchers need to dig deeper to uncover the specific reasons for their success.

“Now I think the real challenge starts, and that's understanding how this happened, why it happened, and which patients will respond,” said co-principal investigator Dr Kristin Zhao, director of the Mayo Clinic's Assistive and Restorative Technology Laboratory.

Researchers theorize that the electrical currents awaken nerve circuits beneath the injury which are droment, but living. The electric currents, paired with rigorous rehab, enable the nerve circuits to receive simple commands from the brain.

“To be able to move my legs and even to stand, it means a lot,” Chinnock told The Huffington Post. “That there’s hope for not only me, but other people.”