A Texas dad gave a heart-wrenching speech about his trans son. It's a must-see.

Ken Ballard wants you to know his son's story. 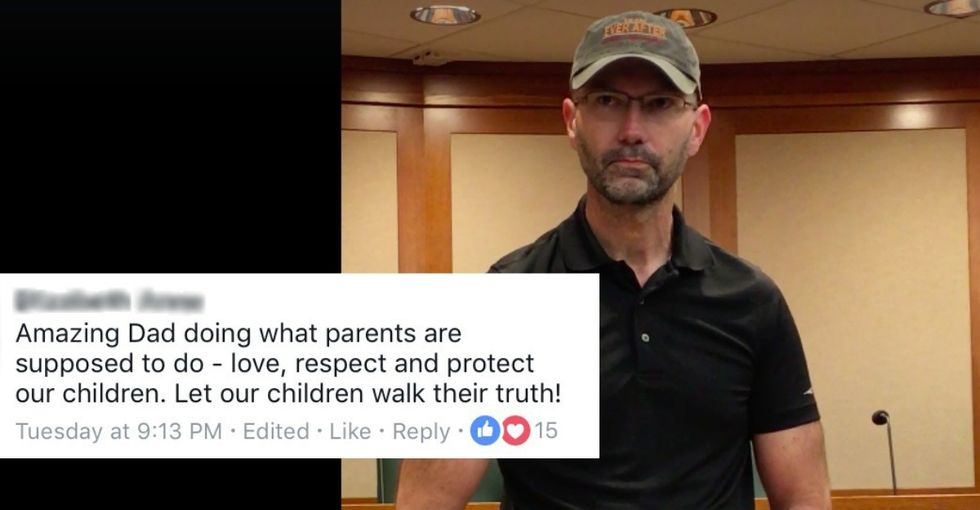 A baseball cap on his head, his hands tucked snugly in his front blue jean pockets, Ken Ballard stood in front of a room of onlookers, admittedly a little out of his element.

But the issue at hand was so critical, Ballard said, he couldn't keep quiet.

Ballard was speaking during Texas' 85th Legislative Session this past winter about his 14-year-old transgender son, Ashur, who attempted suicide twice.

Ashur, like many trans people, had wrestled with his identity in a world where ignorance and irrational fear-mongering continue harming people like him.

"Was I going to be his bully?" an emotional Ballard said in response to his son's coming out. "Was I going to try and put him back into a box that fit the rules of my world at the time or wait it out and see if it would just pass and go back to the way it’d use to be?"

Advocacy group Equality Texas, who's worked with Ballard in fighting for LGBTQ rights in the state, recently shared a video of him speaking during the session. Although it was captured on video several months ago, Ballard's emotional plea in front of his fellow Texans is just now making waves online.

Since Equality Texas shared the video on Facebook, the comment section has filled with loving messages of support and admiration.

The comments, although mostly positive, are a bit bittersweet to Ballard.

"I ... see comments that too many parents missed out on what could have been an amazing journey for them and their child by not accepting them," Ballard explains. "Be as excited about your kid's life as you were at the sonogram, when 'we are having a baby' was enough."

The ongoing debate over trans rights isn't isolated in Ballard's home state. Legislatures at both the state and local level across the country are pushing forward with harmful bills this very moment.

A recently proposed Texas "bathroom bill" — which would have forced trans Texans to use the restroom that corresponds with the sex they were assigned at birth (not the gender they identify) — was just rejected by House Speaker Joe Straus, which was great news for human rights groups like Equality Texas.

But there's still much at stake in the Lone Star State and in jurisdictions from coast to coast.

A handful of states, including Montana, Virginia, and Minnesota — as well as local school boards spanning the U.S. — deliberating similar bathroom bills. Research shows these laws leave trans people even more vulnerable to dangerous circumstances in their own communities — yet, their passing doesn't protect anyone.

Chances are, equality — and trans lives — might be at stake in your own region of the country.

As for Ballard and Ashur, they're living proof that acceptance and inclusion save lives.

And, as Ballard's moving speech illustrates so well, it's important our laws reflect that critical reality.

"I've watched a kid go from someone who, 26 months ago, was in despair," Ballard says of his son's mental health. "Now, [he's] flourishing."