A surprise sweet 16 took place on the subway. It showed humanity at its best.

'Can strangers in a subway car come together and have a party?' 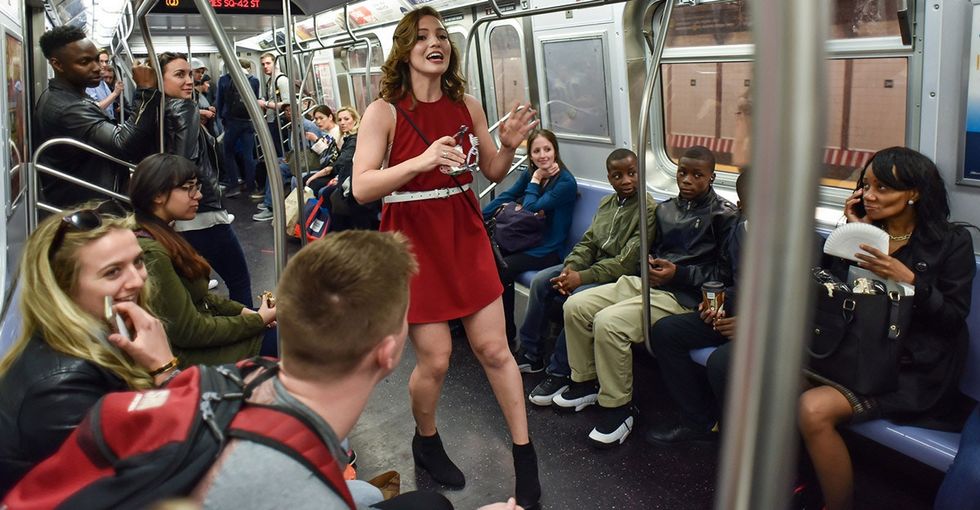 Addie Weyrich wanted to do something spectacular for her friend Jenny Gorelick's sweet 16.

So she decided to throw Gorelick a surprise party — on a New York City subway train.

Sporting a bright red dress and a whole lot of anxious enthusiasm, Weyrich informed passengers of New York City's Q train about what was about to happen.

"Jenny loves the subway," she announces to curious and confused riders in the video below. "She loves it so much that we thought we would throw her a surprise birthday party — right here, on this subway car."

She then asked riders if they'd help her pull it off.

"She does not know this is happening," Weyrich explained to the passengers. "She thinks she's going to a completely different birthday party. She's going to come on at 57th Street — our friend, Sam, is there; she's going to make sure she's getting on this car exactly."

Fortunately — and maybe surprisingly if you think the cold New Yorker stereotype is true — most of the subway riders were more than happy to help pull it off.

When it was time for Gorelick to step on board, the surprise went perfectly.

The subway strangers seemed just as elated as Gorelick to celebrate her big 1-6.

Addie Weyrich is an actor. So is Gorelick.

Weyrich and Gorelick are part of the team at Improv Everywhere — a comedy group that produces spur-of-the-moment performances to get public reactions.

You can watch the video of the whole event here:

If you think that knowing it was staged might take away some of the magic of the sweet 16 party, you'd be wrong.

Though the birthday component of the performance was fake, the excitement, enthusiasm, and camaraderie of the subway riders — who were not in on the joke — certainly wasn't. And that was the point.

"The real intent behind this stunt was to see if we could get an assortment of random commuters to play along," Charlie Todd, who created and directed the event, wrote about the experiment. "Can strangers in a subway car come together and have a party?"

The answer, clearly, is yes.

Improv Everywhere orchestrated a number of the parties throughout the day. According to Todd, while not everyone on board was up for the surprise, about 80% of the riders helped out in some way when given the opportunity.

"The best part of the experience was the smiles, laughs, and hugs from complete strangers," Todd wrote. "I’ll never get tired of seeing people from all different walks of life come together to do something fun on a subway car."

The performance by Improv Everywhere feels like a breath of fresh air in today's tumultuous times. Lately it can feel like everyone is helplessly divided; like the ties to our communities and neighbors are nonexistent, and we're all growing more detached.

That's simply not the case, and the helpful, smiley strangers that pulled off Jenny's 16th birthday are proof of it.

"Even if the set up was staged, the party was real," Todd wrote. "And it was a blast!"