A selfless chef won a reality game show and used the prize money to feed his community. 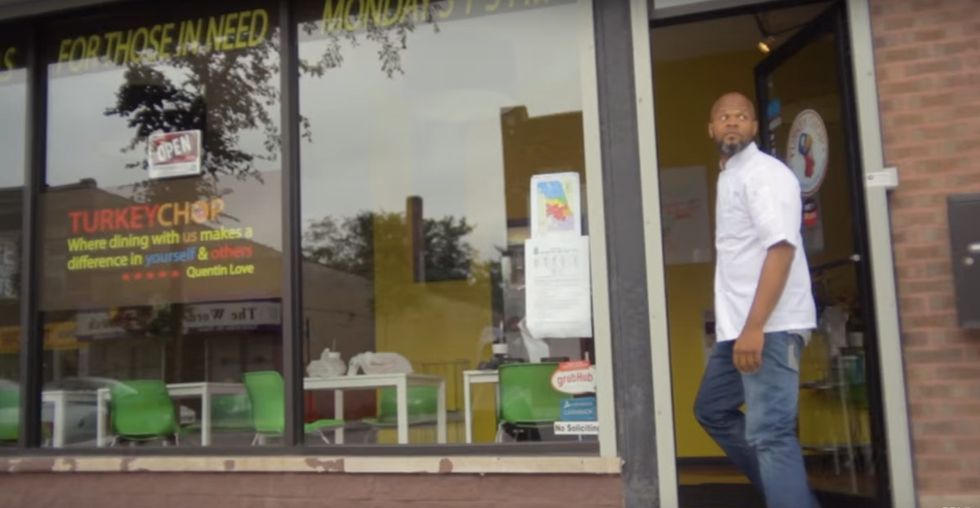 Chicago's Turkey Chop Gourmet Grill has no shortage of flavor. And neither does its owner.

Quentin Love's restaurant, on Chicago's west side in a neighborhood called West Humboldt Park, lives by a simple rule: "No beef. No pork." There you can get unique dishes like the Jive Turkey Burger on a whole wheat bun or the Rich Boy Sandwich, a grilled fish twist on the classic Po Boy, which usually uses roast beef or fried seafood.

But Love knows it's not just well-to-do Chicagoans who need more diverse meal options. Chicago's sizable homeless and poverty-stricken community could sure use a helping hand, too.

So every Monday afternoon, the restaurant closes for business and offers free meals to the community, instead.

Turkey Chop Gourmet Grill opened in 2012 as a continuation of Love's yearslong effort to "attack the food desert theory." He wanted to bring more diverse eating options to neighborhoods around the country in dire need of them.

In 2014, he took the concept even further at the West Humboldt Park location by transforming the restaurant into a local food pantry once a week.

On Monday afternoons, residents of the community pour in to grab free, ready-made meals. It's for anybody in need of a hot, fresh, nutritious bite to eat, whether they're homeless or not.

Love also runs a cooking class out of the restaurant on Monday nights that teaches people in the community how to prepare nutritious meals for themselves and their families.

With support from the Chicago Food Depository, Love and his staff at Turkey Chop Gourmet Grill have given away over 60,000 meals in the past two years, mostly on the back of donations and community volunteers.

But Love says funding has been a constant issue, with him spending nearly $2,000 a month out of his own pocket to finance the project.

When Love got the chance to compete on Food Network's "Guy's Grocery Games," though, he knew he had a chance to fund the program for a long time to come.

"They called me (to be on the show)," he said. "It was just a random call. And I saw it as an opportunity."

An opportunity to battle against other chefs in a nationally broadcast, pressure-packed cooking challenge. But it would help him keep his restaurant's community program going.

If he won, anyway.

And that's exactly what Love did. In "Guy's Grocery Games" (or "Triple G"), contestants sprint up and down supermarket aisles, scavenging for ingredients that fit their allotted budget, and have 30 minutes to whip up a meal that'll impress the judges.

Love blew away the competition with his cooking skills and a little help from his grandma's famous mac 'n cheese recipe.

When all was said and done, he walked away with $36,000 in prize money. And he knew exactly what he was going to do with it.

Half of Love's prize money will go toward making sure Turkey Chop Gourmet Grill can continue to feed the community.

The other half will go to another cause close to Love's heart, the United Services Organization, which provides relief to military members and their families.

"The prize money pays for sustainability" for the program, Love said. There are no grand plans to expand nationally, renovate the restaurant, or launch more ambitious projects.

That's not what really matters to Love.

For now, the Turkey Chop Gourmet Grill is just going to keep on giving delicious, nutritious meals to Chicagoans in need.

And thanks to Love's big Food Network win, that's not going to change any time soon.

"Being on the show was great," he said. "I just kept thinking about what I had to do. And the rest is history."