The 49ers quarterback defends his decision to protest during the national anthem. 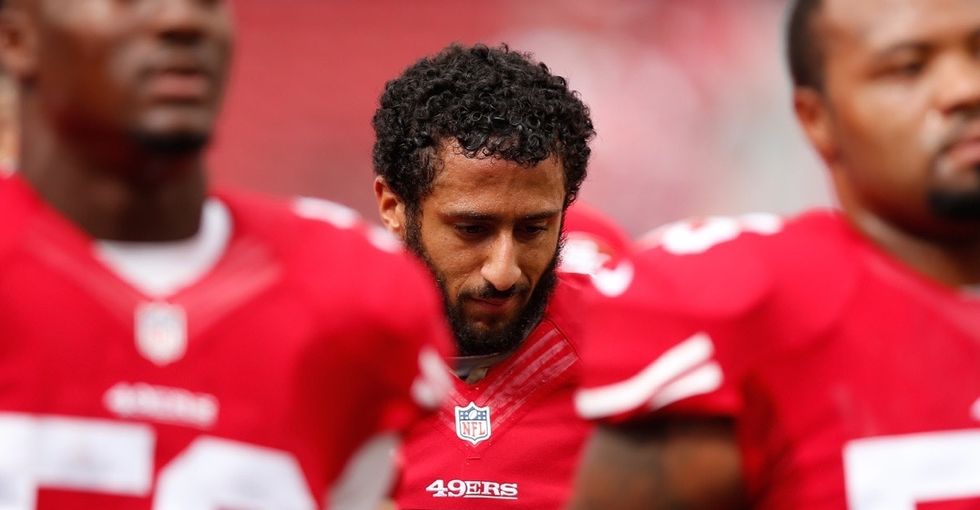 San Francisco 49ers quarterback Colin Kaepernick sat huddled on the bench before his team took on the Green Bay Packers in a preseason football game.

As the national anthem played, players on both teams stood to honor the flag. Kaepernick, however, wasn't among them.

This decision — not his electric play that led the team to the Super Bowl just a few seasons back — may very well go down as the defining moment in his career. He seems OK with that.

"I am not going to stand up to show pride in a flag for a country that oppresses black people and people of color," he told the NFL of his decision.

The move was pretty shocking. After all, standing for the national anthem is just something that happens before sporting events in this country. His decision to sit it out was met with massive condemnation. It was tough to watch.

But he stood (or rather sat) firm, saying, "To me, this is bigger than football, and it would be selfish on my part to look the other way. There are bodies in the street and people getting paid leave and getting away with murder."

So let's take a look at why the 28-year-old took a stand by taking a seat — in his own words.

Kaepernick has since elaborated on why he sat out, and it's worth hearing his explanation. By understanding his motives, perhaps it's easier to understand his methods. Below are some of the highlights (but you can check out the entire transcript here).

"There’s people being murdered unjustly and not being held accountable," he said about police brutality. "People are being given paid leave for killing people. That’s not right. That’s not right by anyone’s standards."

He doesn't see his move as disrespectful, however, and he certainly doesn't owe the military any sort of performative patriotism. The military has fought for his — and everyone's — opportunity to protest peacefully.

"This is something that has to be said, it has to be brought to the forefront of everyone’s attention, and when that’s done, I think people can realize what the situation and then really effect change," he said.

Protest and criticism aren't signs of hate, but rather of a desire to improve a home that you love, and there's certainly nothing un-American about protesting.

When Ryan Lochte embarrassed himself while acting as a representative of the United States with a lie about being mugged at gunpoint during the Rio Olympics, he was rewarded with a spot on a primetime TV show to explain himself. So why can't we cut Kaepernick a bit of slack for taking a principled stand against a well-documented pattern of injustice happening in our country? Of the two actions, Kaepernick's is far more inherently "American" than Lochte's, hands down.

Just a few weeks earlier, Olympic gold medalist Gabby Douglas faced somewhat similar national anthem-based criticism after she failed to put her hand over her heart during a medal ceremony. Never mind the fact that other U.S. athletes did the same with relative silence from critics.

The truth is that America is a 240-year-long work in progress. Things can, and should, and if we're being optimistic enough, will become better as time goes on.

In order for that to happen, we cannot let ourselves remain complacent, and we cannot gloss over issues of inequality, oppression, and violence in our quest to become — as so many like to say — "the greatest country on Earth."