A nun is going viral for her mad chainsaw skills during hurricane cleanup in Florida. 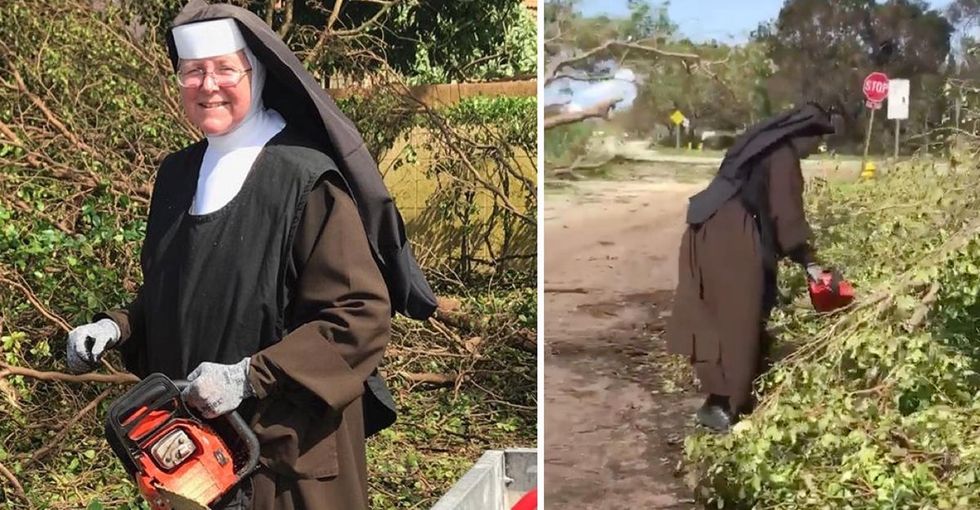 There's a dark-clothed, chainsaw-wielding person roaming the streets of Miami in the wake of Hurricane Irma.

Southern Florida has been through a lot; Millions of residents are still without power, facing severely damaged homes and a critical lack of supplies.

So, yeah. This is the last thing they need:

GIF via "The Texas Chainsaw Massacre."

But the SoFlo chainsaw artist is no villain. She's a nun. And she's a hero.

Sister Margaret Ann, who people are calling "The Chainsaw Nun," has been using her tool of choice to cut up and remove trees felled by the storm.

A video posted to the Miami-Dade Police Department's Facebook page showing her in action during critical storm cleanup has gone viral, racking up over a million views:

As a principal at a local Miami high school, Sister Margaret Ann knew she needed to help however she could after her neighborhood was ravaged by storm winds and heavy rain. She never expected it would turn her into a viral hero.

"The road was blocked; we couldn't get through," she told CNN. "And I saw somebody spin in the mud and almost go into a wall, going off the road. So, there was a need, I had the means — so I wanted to help out."

With nearly the entire country sending "thoughts and prayers" toward those affected by the recent hurricanes, one Facebook commenter made a poignant observation:

"Prayers are great, but prayer accompanied by action is powerful," wrote Kevin Reed.

While the bizarre contrast of a nun in full habit holding a heavy duty power tool might make us smile, what's going on as Florida recovers from the storm is no laughing matter. Sister Margaret Ann and her chainsaw are an excellent reminder to all of us that we have the power to get involved and help the people who need it right now.

The Chainsaw Nun is amazing, but she can't do it all on her own. If you want to pitch in but don't live near the areas affected by Irma (or just don't have a chainsaw lying around), there are still plenty of ways you can help.