A new scholarship program gives young artists the chance to follow their passions.

It's a bold new way to reward all kinds of talent. 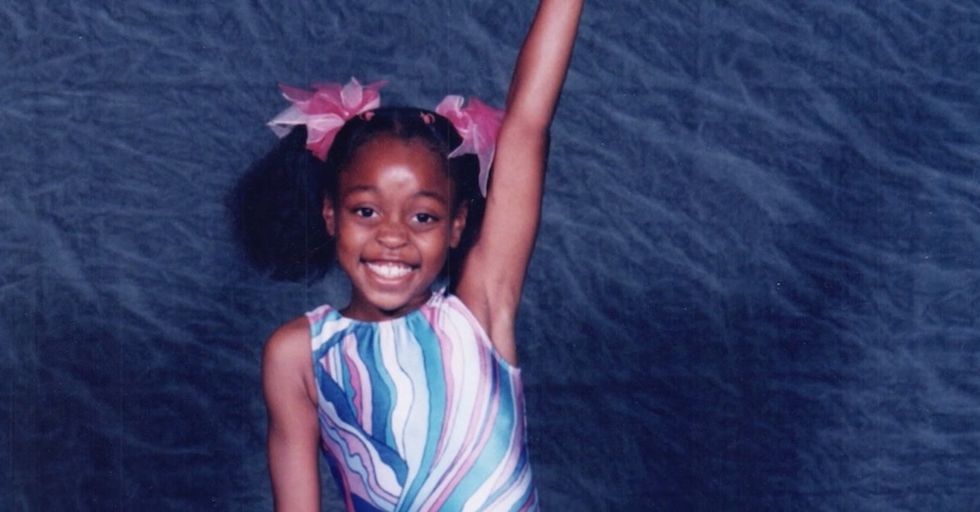 "While I’m dancing it’s just different. I feel like I want to use a word that I don’t know yet. It’s the most myself I ever feel."

A new scholarship program gives young people the chance to follow their passions.

Posted by Upworthy on Thursday, October 6, 2016

For Khorii Tinson, an opportunity to go to university for what she loves is the natural extension of her lifelong passion for dance.

Her dad, Karl, said Khorii knew she wanted to be a dancer before anyone else did. Even when she was very young, she was finding ways to make dance a part of everything they did.

Despite an early dance teacher kicking her out of class for doing cartwheels — and then warning her parents that dance probably wasn’t Khorii’s thing — her love of movement never faded.

Khorii performing as a kid. Image via Live Mas Scholarship/YouTube.

Dance was a constant in Khorii's life when her father had to leave the family for Army deployments overseas. Three times he left for Iraq, with one final tour in Afghanistan. When everything else was uncertain or changing, dance was always a part of Khorii's life. Through the years, she continued to pour her heart into dancing and performing.

For some dancers, the dream of going further in their studies ends after high school — and not for lack of passion. Of the more than 7,000 universities and colleges across America, only about 80 offer accredited dance programs​. Private unaccredited programs exist, but they’re often even more expensive and students who attend them might not be eligible for financial aid.

This is the reality for so many creative youth looking to follow their dreams. There aren’t enough schools with programs for what they want to do. Even if they do find a school they love and get accepted to it, there often aren’t enough scholarships to help them afford to go.

It's a big problem, and one this new scholarship program is trying to fix.

The Live Mas Scholarship is offered exclusively to talented, creative students who want to pursue higher education, but don’t fit the criteria for standard "academic" or "athletic" scholarships.

In 2016, the Live Mas scholarship fund awarded 220 scholarships to deserving recipients, ranging from $2,500 to $25,000 each. They promise a one-of-a-kind opportunity for the next generation: one that’s not based on grades or sports. There are no essays, no test scores, no right or wrong answers. There's just talent and a desire to do more with it.

Khorii received a scholarship to attend the prestigious dance program at the University of Texas in Austin.

For her, it’s the culmination of a dream and a reminder of who she is.

"When I’m dancing, I know that’s where I want to be and that’s who I am. Whole. I know that things will work out in the end, and I think being optimistic has always helped me. I will find the positive in any situation."

Khorii’s mom, Mina, agrees. "I’ve always had two words for Khorii, whenever she goes to school or she’s on stage: Be brave," she said. "Fight for your dreams fight through your failures, and you’ll survive, and through that, you’ll find your happiness. You’ll find your joy."