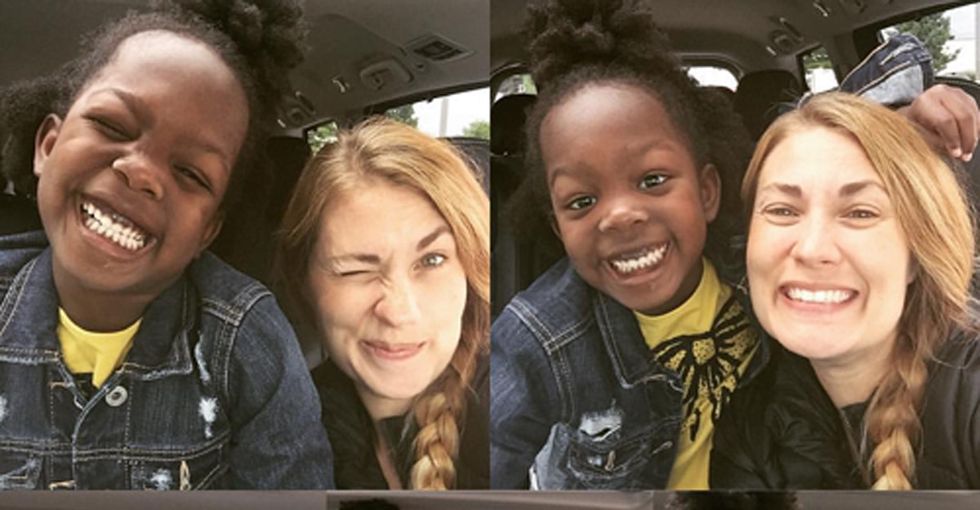 Jen Kroll got pretty excited when she saw a recent Target ad.

No, it wasn't because of the "buy one, get one half off" sweater deal. It wasn't even because flannel sheets were 15% off.

Nope, not at all. (Though, flannel sheets do sound nice...)

Here's what made her week: a photo of an Elsa Halloween costume.

The ad meant so much to her that she posted it on Facebook and had this to say:

Do you see what Jen saw? The model sporting the dress worn by Elsa of "Frozen" fame has arm crutches!

Yes, that's a big deal. Especially for Jen because here's a photo of her incredibly cute daughter, who just so happens to love Elsa:

I mean, seriously. Can you even with the adorableness?! Photos by Jen Kroll, used with permission.

I reached out to Jen, who's a photographer and mom to three kids, to find out more about her daughter's story.

Jen's youngest child, Jerrensia, came to her family on a medical visa from Haiti in 2011. She was just 14 months old at the time. "The closest diagnosis she fits into is Arthrogryposis Multiplex Congenita (AMC)," Jen explained to me. That basically means that she has significant issues with her joints. "Specifically," says Jen, "her hip sockets never formed properly, [her] knees were locked at a 90 degree angle, [her] feet were clubbed, and she lacked nearly all muscle tone in her legs."

For two years, Jerrensia was in intense physical therapy. Unfortunately, she didn't make much progress and "despite innovative orthotics, we made the difficult decision to amputate her legs through the knees," Jen shared. And while that must have been a difficult decision, it turned out to be the difference between being completely reliant on a wheelchair to get around and having more mobility options.

Today, Jerrensia is an active 5-year-old who "walks and RUNS everywhere on prosthetic legs and uses arm crutches to compensate for the lack of muscular development in her legs," Jen explained.

Mother and daughter, having some fun with selfies!

"In mainstream culture, perfection is valued," she said. (Can I get an amen?!) "Special needs families exist in a subculture. The challenges we face are shared with those who understand them. And we're virtually invisible to the outside world."

Even more than being perceived differently — or worse, being invisible — children with special needs face distinct disadvantages in the world. Jen shared these stories with me that, sadly, aren't uncommon:

"While we have an incredible school that has embraced our daughter and are actively working to provide the best environment conducive to learning, another friend has recently been forced to hire an attorney at great personal cost because her school will not provide safe and accessible entry and exit from the building. Her kids are treated as an inconvenience. This is still happening every day in America.

While we have great acceptance and love in our little social circles, stepping outside of them is a different experience. Our daughter becomes a circus side show and many people lose all their manners. Recently at the zoo, we experienced a school group of a dozen children between the ages of 8-10 who circled our daughter in a play area. They swarmed her, pointing, laughing, and staring at her legs. It was brutal for a 5-year-old. And it took everything in me to not go Mama Bear in the absence of their teachers and chaperones."

"People do not see children like my daughter very often," Jen said. "They don't SEE children with disabilities."

Jen talked about how there aren't many movies with lead characters who have disabilities or special needs, and when they are included, it's usually to teach a lesson to another character.

"So when I saw Target place a child with Spina Bifida front and center, advertising Disney's sweetheart, Elsa, it brought me to tears," she said. "This little girl was no longer invisible. Arm crutches and leg braces were demystified. Target made an effort to make her a part of mainstream culture. Not as an object lesson, but as a beautiful child with a great smile who was clearly excited about being Elsa."

That matters, because sooo many kids with beautiful smiles just like Jerrensia's are complex human beings. They weren't put on this Earth to serve as lessons for others. If our kids can grow up in a world where special needs and disabilities are normalized, others won't perceive them as oddities but as the unique individuals they are.

When Jen showed the Target ad to her three kids — 5-year-old Jerrensia and her older brothers, ages 9 and 13 — they were all excited.

One said, “Look at Elsa! She has crutches just like you!" Jerrensia was thrilled. She shouted, "Wow! Just like me!"

Jen summed it up so well, so I'll leave you with her words as a parting thought:

"We work very, very hard to make sure that her little corner of the world is anything but lonely and void of other children with similar abilities. But as far as media is concerned — there is a vast emptiness of children with whom she can relate. A Target ad with one precious little girl dressed as Elsa met her where she was and made the world a little more beautiful and friendly."

Thank you, Target! Now it's time for other retailers to jump on board this important train!