A medical school in Cleveland got one of the coolest gifts of all time from Microsoft: holograms. 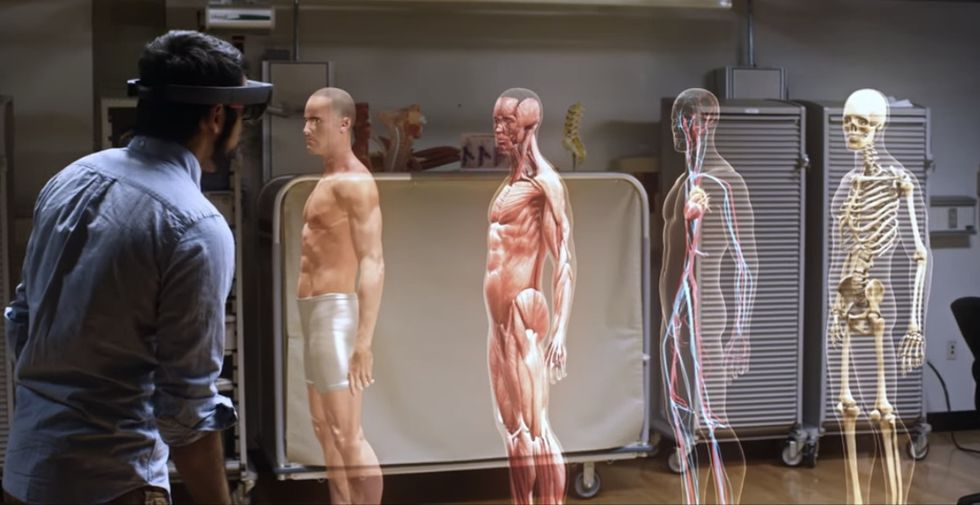 Who hasn't thought about what it would be like if holograms were more commonplace?

Not just holograms as specters for spectators...

A pseudo-holographic Tupac Shakur performs for hipsters and hop-alongs at Coachella 2012.

...but holograms as an integrated part of our lives — as the new standard interface for personal computing.

Engineers may know how to create holograms, but the technology has yet to touch our lives in ways that are relevant and useful to us.

Holographic technology may finally be getting the chance it deserves and in a truly worthy way.

In a partnership with Microsoft, medical students at Cleveland's Case Western Reserve University are learning the intricacies of the human anatomy with holograms.

The goal is for a team of students and faculty to create a comprehensive anatomy curriculum using HoloLens, Microsoft's augmented reality headset that projects computer-generated holograms onto users' view of the physical world.

The HoloLens will be available for early purchase by approved developers in 2016 for the low, low price of $3,000 per headset. Photo via Jorge Figueroa/Flickr.

Radiology professor Mark Griswold was one of the first people at CWRU to test HoloLens. Griswold's "world had changed the moment he first used a prototype," according to a press release from the university.

"I think this will improve students' confidence in learning anatomy dramatically," says Griswold in the video below. "With HoloLens, you can imagine having a class standing around a model, almost like a tour group in a museum, where they're all interacting completely naturally."

The technology proved itself instantly to students, too.

"You can take any anatomical part and show any of it," said CWRU medical student Satyam Ghodasara. "You can move it around, you can make it kind of translucent so you can see through the outside, and that really helped me understand how cardiac anatomy worked. It was a way of seeing it that you couldn't do with an actual heart."

Holograms can make the impossible possible, which could transform education as we know it.

From arts to astronomy, archaeology to engineering, augmented reality could have huge implications for how people learn. “The whole campus has the potential to use this," said Griswold. "Our ability to use this for education is almost limitless."

Even NASA has plans for the HoloLens. They want to send headsets to space so Earth-bound scientists can better collaborate with their colleagues in the cosmos.

A rendering of how augmented reality could look for scientists collaborating in a 3D simulation created using Mars rover data. Photo by NASA's Jet Propulsion Laboratory.

For now, early signs point to holograms having a positive effect on the future of medicine.

On top of the new perspectives they allow, another change holographic learning could bring to medical schools is a reduced need for cadavers.

While learning anatomy the old-fashioned way will always have an important place in medical training, who can honestly argue that fewer dead bodies lying around in noxious chemical baths isn't a good thing?

Check out a video about the Microsoft-CWRU partnership: