A Marine dad had a tea party with his daughter, and people are loving it. 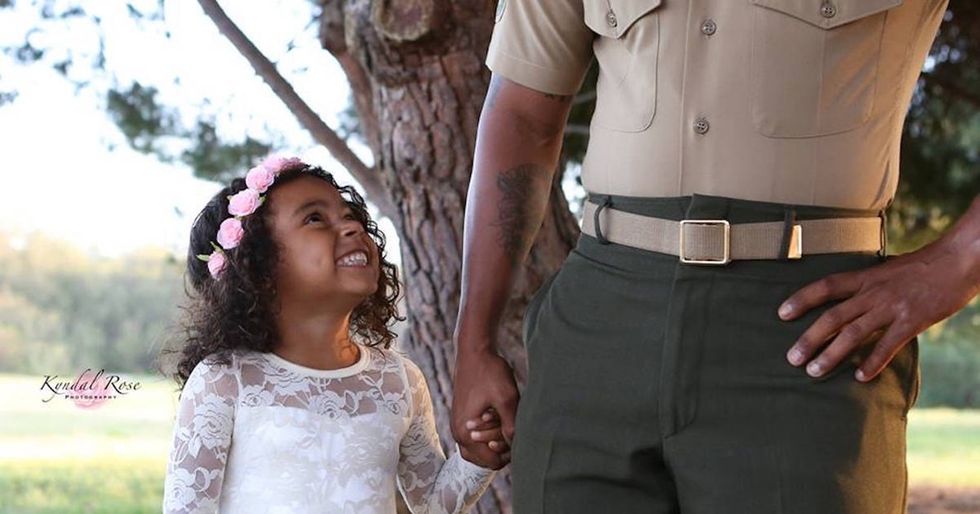 By any measure, Keven Porter is a good dad.

He makes a living as a U.S. Marine Corps drill instructor, where he trains new enlistees in the art of serving our country. When he's not scaring the daylights out of fresh recruits, he's a loving husband to wife Lizette and father to 4-year-old daughter Ashley.

Unfortunately, with such a demanding job, Porter doesn't get quite as much time to just be a dad as he'd like. So Lizette took matters into her own hands and set up a special daddy-daughter photo shoot for the two of them that would give them a chance to make some memories together.

Lizette and Ashley had a sneaky plan, though. This was no ordinary father-daughter photo shoot.

Porter arrived dressed in his uniform, but he quickly realized he wasn't the only one who had dressed for the occasion.

When he showed up at the shoot in Oceanside, California, he found Ashley in full princess attire, sitting at a small table set for royal tea.

All photos by Kyndal Rose Photography, used with permission.

That's right. This Marine had been ambushed with a fairy-tale tea party.

He never saw it coming. But hey, duty calls, right?

Porter was caught a little off-guard and hesitant at first, but Ashley's excitement was plenty to persuade him to go for it.

While we think of military men as gruff, tough, and fearless warriors, Lizette told ABC News she hoped the photo shoot would show the world that "a lot of them have a completely different side to them."

The photos of Porter joining Ashley's tea party with love and enthusiasm have made waves around the internet.

The photos are incredibly moving and touching; the contrast between soldier and princess, father and daughter, and the powerful bond they share sparked thousands to share the series of photos that photographer Kyndal Rose shared on Facebook.

Fatherhood can be a great equalizer that tears down outdated ideas of what masculinity should be.

There's no measure of a "real man" that matters more than how he treats the people he loves — not his physical prowess, and not how fast he can assemble a rifle.

Kudos to Keven Porter for proudly sharing his softer side, and for his service to our country. The world could use more fathers like him.