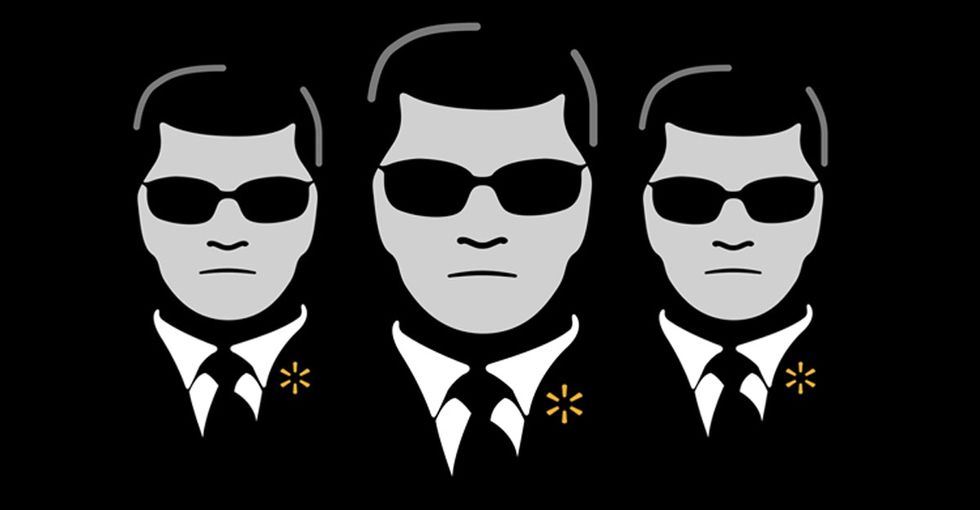 Have you ever felt like you're being watched? It's creepy.

Now imagine it's happening at work, and it's your boss who's watching. So is their boss. And their boss' boss. And the company lawyers. And probably the board of directors.

They're all tuned in to you.

It's not because of your job performance. I mean, let's be real: You obviously deserve a raise. Or a trophy, at the least.

Strangely, they're watching you because of your values — specifically those having to do with what you believe makes a "fair" workplace.

If you work at Walmart, it may not be in your imagination.

In 2012, as Walmart, the nation's largest private employer, prepared for the holiday shopping bonanza, activists across the country, including some of the company's front-line employees, geared up for protests.

Their goal was (and still is) to pressure the company for non-poverty wages and benefits — you know, the typical signs of work with dignity.

They also want Walmart management to stop intimidating employees who speak up on workplace issues. The company, in case you weren't aware, is a notorious union-buster.

Walmart's alleged "retaliatory" acts against employees who protested has become the subject of a labor law inquiry.

The initial details, assembled for a National Labor Relations Board hearing, have been revealed in a more than 4,000-word exposé by Bloomberg Business.

No decision has been reached yet, but a lot of information has been uncovered on how Walmart handles situations in which workers attempt to exercise their right to organize for a reasonable voice in their work lives.

1. They have a hotline for managers to report union activity.

In an interview with CBS Evening News, Walmart spokesman David Tovar called the protests "another union publicity stunt," implying the company didn't see the protesters as a threat.

Despite that, Walmart beefed up staffing for a dedicated labor hotline for store managers to report activity so executives could pre-empt organizing efforts among unsatisfied workers.

2. They created a "playbook" for stopping union drives.

This is not from Walmart's union-busting playbook. But it makes just as much sense. Image by opensource.com/Flickr (altered).

The document, creatively titled "A Manager's Toolbox To Remaining Union Free," psychs up managers with lines like, "As a member of Wal-Mart's management team, you are our first line of defense against unionization."

To be clear, it's not because the company has a problem with unions: "We are not anti-union; we are pro-associate."

(Unless, of course, their associates want a union.)

3. They form special teams to deal with disgruntled workers.

At the faintest whiff of workers uniting in common purpose, Walmart mobilizes special "Delta teams" to stop union activity in its tracks.

Members of the labor rights group OUR Walmart have reported executives from the company's Bentonville, Arkansas-based headquarters showing up at stores on a moment's notice, armed with talking points and legalese to derail organizing efforts.

4. They hired a defense contractor to spy on activist workers.

According to Lockheed Martin's website, the tool "monitors and analyzes rapidly changing open source intelligence data … [that] has the power to incite organized movements, riots and sway political outcomes."

Emails produced in discovery for the NLRB hearing include social media monitoring updates from Lockheed Martin. Favianna Rodriguez, an artist and activist (not a Walmart employee) whose tweets were among the LM updates, told Bloomberg, "We're artists, not ISIS."

5. They paint protesters as terrorist threats to gain access to federal resources.

In 2013, protests were planned at the company's headquarters to coincide with a high-profile shareholder meeting. 14,000 people were expected to attend the meeting, including shareholders, investors, the Walton family, and even Elton John.

When company executives heard members of the Occupy movement were expected to join the protests, they enlisted the FBI Joint Terrorism Task Force. No details have been released on the nature of the collaboration.

But in a show of how cozy Walmart may be with the feds, they a hired former FBI officer as their head of global security.

6. They will hurt many for the rightful actions of a few.

In 1999, a small group of butchers at a Walmart location in Jacksonville, Texas, voted to unionize — it was their legal right, and they democratically decided it would serve their best interests.

Walmart's response didn't just hurt the newly organized meat cutters. They shut down every meat counter in every U.S. store and switched to only pre-packaged cuts.

Of course, the company wouldn't admit that it was about the union. Walmart spokeswoman Jessica Moser told the Associated Press, "Our decision to expand case-ready meat has nothing to do with what went on in Jacksonville."

This isn't just a problem for Walmart workers.

Again, we're talking about the largest private employer in the United States. Low-wage retail workers are the most common workers in the nation, and Walmart sets the tempo for how they're treated.

The nation is at a crossroads, and our choice is between corporate domination or economic freedom for millions of people. It's a David and Goliath story if there ever were one. Who are you rooting for?

If you stand with Walmart workers, sign OUR Walmart's petition calling for consistent full-time scheduling and a $15 minimum wage.