5 things to do if you feel like you'll never forgive your partner for voting Trump. 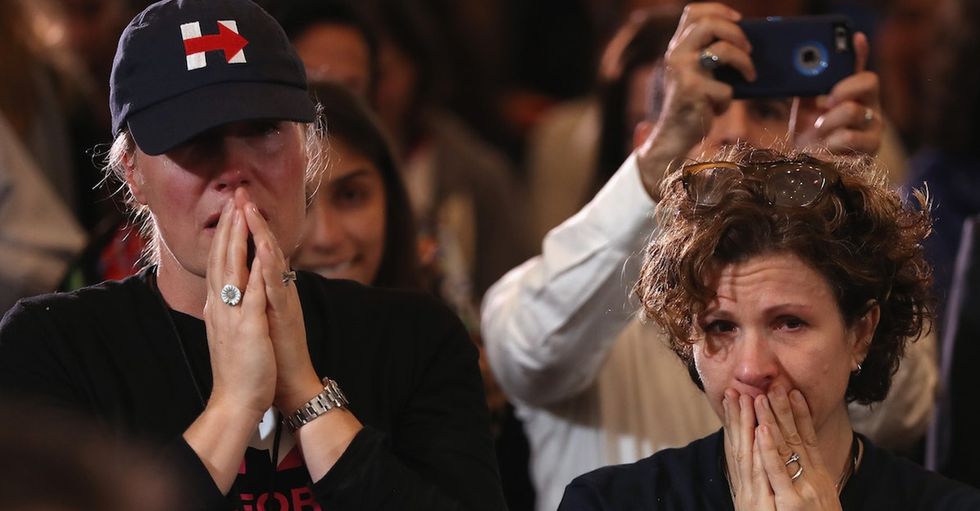 This has been a tough week for many of America's couples.

As President-elect Donald Trump prepares to take over the White House, interracial couples are afraid to go out in public for fear of physical or verbal assault. Gay couples are afraid their marriages might soon be disqualified by the Supreme Court.

But there's another kind of couple also battling fear and resentment right now: Couples where the two partners voted differently. Perhaps it was one for Trump, one for Clinton. Perhaps one member of the partnership didn't vote at all.

Whatever the reason, this new hurdle is threatening to rip many relationships apart.

"I've never seen this before," said Susan Falcon, a couples counselor of 25 years based in New Orleans. "Every four years there's an election, and sometimes the spouses might bicker about it, but I've never seen anything like this."

Some couples are turning to therapy (Falcon said she did, in fact, take on a few new clients this week for this very reason). Some are trying to find their own way through. Others are throwing in the towel altogether.

The question is, how can couples like these put their political differences aside for the sake of their relationship? Or can they at all? Here's what Falcon is telling her clients.

1. First, remember the person you fell in love with.

Falcon, who sees an extremely diverse set of clients, said the most common scenario she's faced is a husband who voted for Trump and a wife who voted for Clinton.

"What's happening now is the Hillary spouse is really grieving. And afraid. And angry," she said. "And the Trump spouse feels that that's ridiculous, that that's a huge overreaction."

This fundamental disagreement can lead to the "Hillary spouse" seeing their partner, for the first time, as a racist and a misogynist. They might be this way, but there's also a chance that they aren't. So Falcon says her first and most important job is to get the partners, both of them, to reflect on each other and what made them fall in love in the first place; whether that's taking turns telling the story of their first date or swapping genuine compliments.

"If [she] wants to think Trump is Satan, she can have that," Falcon said. "But I try to get her to remember who she married."

2. Hillary voters: Remind yourself that your spouse is not, in fact, Donald Trump.

Falcon doubled down on this point. She says it's the key to not just getting past these election results as a couple, but in maintaining a healthy bond throughout the Trump presidency.

"I try to nail that down so that, going forward, everything Trump does will not feel like their partner's responsibility," she said. In other words, despite this being hard to digest: Just because someone voted for Trump doesn't mean they've endorsed all of his future actions.

Election Day and the inauguration after that are only the beginning of a four-year conversation.

3. Trump voters: Now is not the time to gloat. It is the time to comfort your spouse because they are experiencing real grief.

To those on the "victorious side," the response to this election may seem melodramatic. But Falcon reminds us that Clinton supporters are actually in a legitimate, and deep, state of mourning.

In fact, Falcon said she actually talks to her clients about the stages of grief. (You know: denial, anger, bargaining, depression, acceptance.)

"I try to get the Trump spouse to understand the emotions of the Hillary spouse and to assume that she would have been loving and supportive toward them had Hillary won," she said.

4. But to both people, Falcon says listening is key. Really listening.

Here's an exercise you can try:

In order to civilly "agree to disagree," you have to properly understand each other's position. Falcon recommends an exercise in which each partner takes turns "interviewing" the other about their views or support for their candidate.

There's just one catch: No arguing.

"The spouse asking the questions, their job is only to listen, take notes, reflect on what they're saying," Falcon said. "I don't let them argue or try to convince their spouse otherwise. I just want them to listen quietly and just leave it at that."

She admits this is a little easier in the presence of a neutral third party, so enlist one if you can.

5. And in the end, remember that, even if it feels like it, this is probably not the actual end of the world.

A Trump presidency may mean really bad things for a lot of people. That much cannot be swept under the rug. But there will also be a lot of good people fighting for what's right. For that reason, at least, the world is not likely to come to an actual end.

"I'm older than a lot of my clients, so I try to give them some perspective," Falcon said. She talked about the first time she voted, when she was a 19-year-old student at Louisiana State University. She had friends who died in the Vietnam War, leading her to protest heavily. So when she watched Richard Nixon win the presidency on a small portable TV, she was devastated.

Getting through a major difference in world views, like the one Trump's election has presented, will take hard work from both partners.

It's not about the Clinton voter "getting over it" or the Trump voter constantly apologizing for the behavior of his candidate. It's about coming together and reuniting over common ground, over the things that made you fall in love in the first place.

And in the end, Falcon just wants couples to make one simple decision:

"Trump may damage our country," she says. "But it's up to you if you let him damage your marriage."