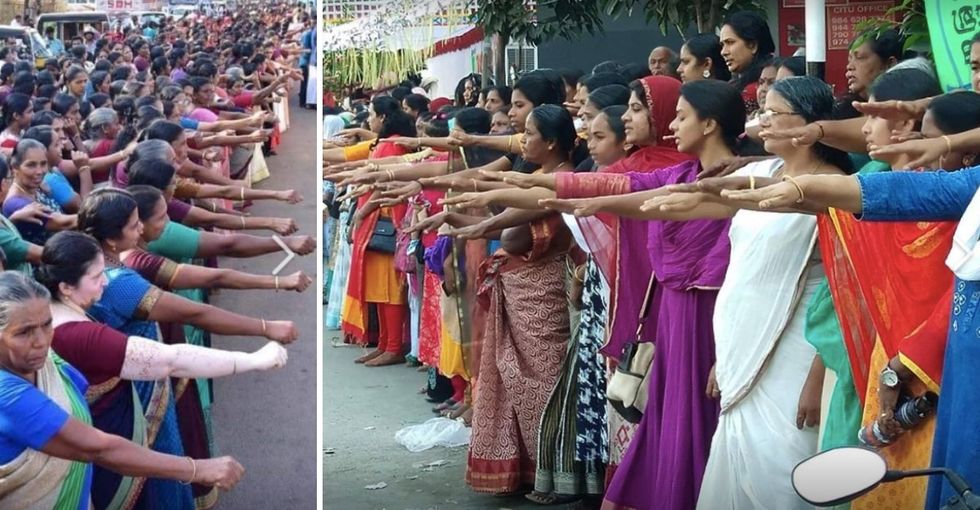 On January 1, 2019, 5 million women in the southern Indian state of Kerala lined up shoulder to shoulder to form a "women's wall" 385 miles (620 km) long. The wall was a statement of gender equality, and a call to end violent protests against women trying to enter Kerala’s Sabarimala temple, a pilgrimage site for Hindus.

The Guardian reports that women of all ages have the legal right to enter the temple, as India's supreme court ruled on the matter in September. However, religious tradition has held that only men and elderly women may enter. Even after the court's ruling, women of menstrual age have been met with violence and abuse as they attempt to worship at the temple.

Women's wall, 620 kilometer long, 5 million women, across all 14 districts of the Indian state of Kerala, refusing to go back to the medieval ages and claiming gender justice. http://bit.ly/2Anzslu

The wall is also a reminder that India is seen as the most dangerous country in the world to be a woman.

Women in India face various forms of gender-based violence and discrimination, including gang rape, tribal practices, sex trafficking, forced servitude, and more. In 2012, India was found to be the fourth most dangerous country for women according to a Thomson Reuters Foundation poll. In 2018, it climbed to number one.

India ranks as the worst country in the world for women in several areas measured by the poll, including:

- Sexual violence, which includes rape (domestic, stranger, or as a weapon of war), lack of justice in rape cases, sexual harassment and sexual coercion as a form of corruption

(In case you're curious, the United States came in at number 10 on the list this year—the only Western nation to make the top 10.)

This wall of women is a powerful show of unity, letting the world—and their country—know that they're done putting up with gender-based violence.

The abuse of women trying to enter a sacred temple is just one symptom of a much larger gender violence problem in India. Since the brutal gang rape of a female student on a New Delhi bus—an assault that eventually led to her death—gained international attention in 2012, India has been on global organizations' radar for violence against women. However, things don't appear to have improved much since.

In 2017, India began offering state-issued wooden bats to women to fend off drunken abusive partners with a promise that police would not intervene. Oxfam India has helped form a coalition of organizations working to end violence against women in the South Asia region, but clearly more needs to be done to turn the tide.

We've seen time and time again that when women come together and raise their voices as one, change follows. Hopefully this powerful "women's wall" will help move the needle for women in India as they inspire others around the world with their show of unity.

Robin Williams' children pay a loving, humor-filled tribute to their father on anniversary of his death