4 things we missed while the media freaked out over Obama's use of the n-word. 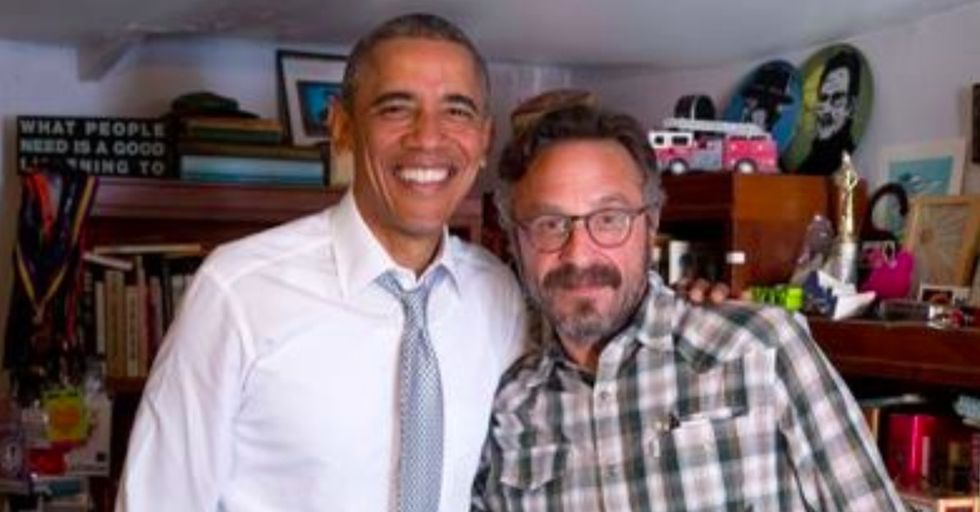 Podcaster Marc Maron had a very special guest on his podcast "WTF with Marc Maron" this week.

Yep, that's right. President Barack Obama sat down with a comedian in said comedian's garage. And recorded a podcast. It is truly 2015, y'all.

Unfortunately, Obama's appearance on "WTF" has gone viral for the wrong reason.

If you've spent a second on the Internet since then you've probably heard about what the president said. Specifically, about one word in particular that he used. Because it really struck a chord.

But that's not the only thing Obama said on the podcast.

During the hourlong podcast, he said some great stuff about really important topics: race, gun violence, and the current state of American politics.

But all of this is getting lost because the media has been focusing on just one word.

So let's change that, shall we?

Here are four other cool things Obama revealed to the "WTF" host.

1. He's just like us: Obama shared how he struggled with fitting in and finding his true self while growing up.

"At a certain point right around 20 — my sophomore year — I started figuring out that a lot of ideas that I had taken on about being a rebel or being a tough guy or being cool were really not me. They were just things that I was trying on because I was insecure or I was a kid."

A lot of us go through phases where we try on ideas or attitudes to see how they fit. Do we always keep them for the rest of our lives? No. We grow and change and mature and all that fun stuff.

The president may be known as being cool and confident, but he wasn't always like that. Growing up as a black man while estranged from his black father definitely put obstacles in his journey to finally just being true to himself.

2. Obama also said that one thing he knows to be true is that Americans are not that different from one another.

"The American people are overwhelming good, decent, generous people. ... Everybody that I meet believes in a lot of the same things."

The United States of America is a very diverse country — it's long been called a melting pot for a reason. It's pretty cool that in spite of all the differences we have, there can be a common thread found within all of us.

Discovering this is one of the most important lessons he learned during his six years in office, he said.

Group hug! GIF from "The Simpsons."

3. On a more serious note, Obama said that we need to do something about the mass shootings — yesterday.

"It's not enough just to feel bad. There are actions that could be taken to make events like this less likely."

During the interview, Obama expressed his frustration at having to give multiple statements a year in response to the mass murder of Americans.

No matter where you stand on the issue of gun control, there is one thing that I thiiiink we all can agree with the president on: These mass killings are terrible and must stop.

4. And perhaps most important, Obama touched on the fact that racism is more than just using slurs.

Of course, this is the part that the media seized upon.

While we have made strides in improving race relations, we still have a long way to go. Blatant racism is no longer the norm, but racial inequality is still pervasive in our country when it comes to things like jobs, housing, and education.

If we only focus on the explicit expressions of racism, we will miss the forest for the trees. In fact, the media's focus on Obama's use of the n-word — out of context, no less — shows just how right Obama was in saying we have a long way to go.

What's that sound? Oh, I think it's Obama dropping the mic over the media proving him right.

GIF via "The Tonight Show with Jimmy Fallon."

Check out the whole "WTF" podcast episode yourself by clicking here.