39 of the best celebrity responses to Keaton Jones' powerful video about bullying.

People of different backgrounds came together in support of one courageous boy. 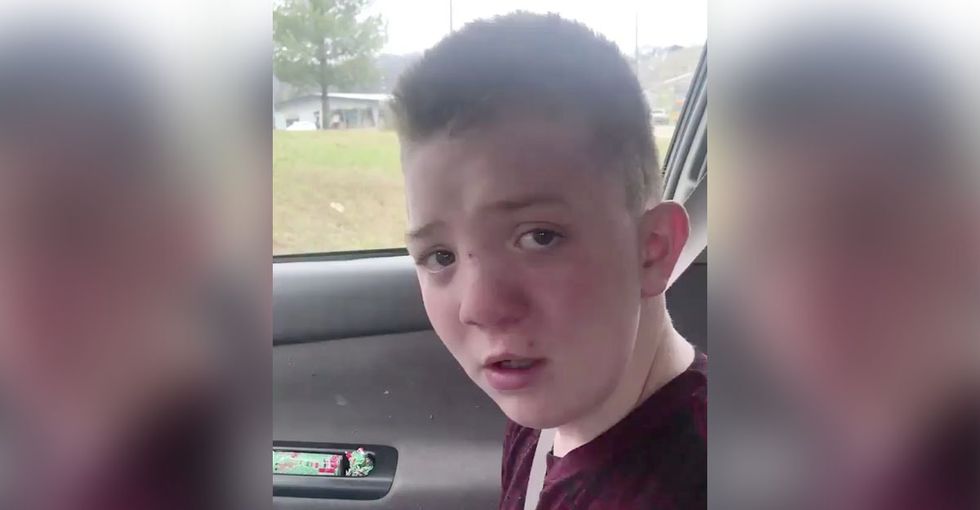 The video, which has been viewed on Facebook more than 20 million times since posting, shows Keaton in tears over being bullied at school. There's a sense of despair and helplessness in his voice that no child should have to feel, but too many have.

"Just out of curiosity, why do they bully?" a distraught Keaton asks his mom. "What's the point of it? Why do they find joy in taking innocent people and finding a way to be mean to them?"

This is Keaton Jones, he lives in Knoxville and he has a little something to say about bullying. https://t.co/coyQxFp33V
— Everything TN (@Everything TN)1512852839.0

Hollywood has Keaton's back.

Avengers Chris Evans and Mark Ruffalo came up big for the little guy.

As did Eleven from "Stranger Things," offering her friendship.

The delightful Tom Cavanagh of "The Flash" voiced his support  for Jones and against bullies everywhere.

Keaton Jones you are amazing. So brave and strong and a beautiful human! Sending love from California! https://t.co/AALuA27r0Z
— Beth Behrs (@Beth Behrs)1512924003.0

He got some love from members of "The Walking Dead" cast.

Hey #KeatonJones Just saw your video about the tough time you're going through. Not sure if you're a Walking Dead f… https://t.co/gaSdl4GOsd
— Tom Payne (@Tom Payne)1512892163.0

Even Gaston and LeFou (a couple of fiction's most famous bullies) weren't having it.

And so did voice actors Susan Eisenberg and Kevin Conroy, who provided the voices for Wonder Woman and Batman, respectively, on the animated "Justice League" TV show.

Keaton you are not alone. Please believe that it gets better in time. Bullies are really very weak and not worthy… https://t.co/8uQEcSBDv8
— Kevin Conroy (@Kevin Conroy)1512919430.0

Keaton, you are an amazing kid, a beautiful unique person. You are one thousand times better than any bully. You ar… https://t.co/rWmspJQsy9
— Paul Feig (@Paul Feig)1512953634.0

Some of the biggest stars in professional sports showed up, as well.

Keaton,U are not ugly, U are amazing. U r my hero for sharing ur story & continuing the conversation about the harm… https://t.co/2zycKXRnQ1
— Anthony Rizzo (@Anthony Rizzo)1512956998.0

This breaks my heart. I stand with you Keaton. You are 1 million times stronger than those bullies. https://t.co/XmGwVYLUjF
— andrew mccutchen (@andrew mccutchen)1512938337.0

Former Green Bay Packers cornerback Bernard Blake urged Jones to "never be ashamed of who you are." Former NFL star Antonio Cromartie stepped in to say that bullies are often just insecure about themselves, asking him to be strong.

Keaton I, along with my @CSUFootball and @packers brothers wanted you to know that we stand against bullying.… https://t.co/zybymNBLAl
— Bernard Blake (@Bernard Blake)1512912040.0

@JamieOGrady Keaton you are a handsome young man who is made in the image God. The kids that bully you are very ins… https://t.co/1XuPYogFcw
— ANTONIO CROMARTIE (@ANTONIO CROMARTIE)1512867285.0

Former NFL wide receiver Donté Stallworth urged caution for people suggesting that the bullies be confronted with hostility, asking people who really want to make a difference to try to do it through lessons of love.

We all know kids can be little shits at times—especially when it’s a group of them. We have to teach them to be bet… https://t.co/HQCqU7Ylrb
— Donté Stallworth (@Donté Stallworth)1512850340.0

"Bullying is bullshit," summed up World Cup champion Ali Krieger. "We need to start coming together, supporting each other and most importantly, standing up for beautiful kids in this world like Keaton."

This brings tears to my eyes..bullying is bullshit! We need to start coming together, supporting each other and mos… https://t.co/WB99Pk0ARt
— Ali Krieger (@Ali Krieger)1512950957.0

Similarly, the music world had words of encouragement and support for Jones.

Demi Lovato predicted that Jones would come out of this experience much stronger than he entered it. Enrique Iglesias called the video "heartbreaking."

Heartbreaking to see this. Keaton you’re strong to say these things and care so much for others. #TeamKeaton https://t.co/hgp0ehnn8Y
— Enrique Iglesias (@Enrique Iglesias)1512940492.0

"This extremely raw and real moment has brought hope and truth to so many people," wrote Kevin Jonas. Nickelback called Jones "a brave young man," asking if there was anything the band could do for them.

Keaton jones you are a hero. This extremely raw and real moment has brought hope and truth to so many people. Be y… https://t.co/CW9rlOCJiZ
— kevin jonas (@kevin jonas)1512941286.0

Justin Bieber and Snoop Dogg posted words of support on Instagram. "The fact that he still has the sympathy and compassion for other people when he's going through it himself is a testament to who he is," said Bieber.

Anti-bullying activists, models, and YouTube sensations all got in on the act as well.

Monica Lewinsky offered a few kind words, saying that she's sorry Jones is being treated this way, saying that other kids "would be lucky to be friends with [Jones]."

keaton, i'm so sorry you're being treated this way. you don't deserve one ounce of this pain. they would be 💫lucky💫… https://t.co/gvhwDzrJbn
— Monica Lewinsky (@Monica Lewinsky)1512902512.0

Model Mia Kang said Jones is her "absolute hero," offering to fly out and visit him at school for lunch.

Logan Paul offered to chat with Jones on FaceTime and send some gear his way.

Politicians across the political spectrum offered words of kindness and courage.

Senator Bob Corker (R-Tennessee) thanked the young man for his courage, and Representative Joe Kennedy III (D-Massachusetts) asked others to look to Jones as a positive example.

Keaton, I know Tennesseans and people across our country join me in saying thank you for your courage. Bullying isn… https://t.co/Vzlp7iat0z
— Senator Bob Corker (@Senator Bob Corker)1512954601.0

Responding to an offer from UFC head Dana White to visit the organization's headquarters, Donald Trump Jr. offered the Jones family a place to stay. Jane O'Meara Sanders of the Sanders Institute urged action over platitudes, calling on the country to "stand up to bullies — in our schools and communities, on social media and in politics and the White House."

Media personalities joined the chorus with offers of support and workplace tours.

Jemele Hill and Sean Hannity offered Jones and his family tours of ESPN and Fox News, respectively. NBC's Stephanie Ruhle pointed to Jones as a motivation for a more honest, brave, and kind world.

Hey Keaton, unfortunately you aren't alone. A lot of kids are bullied, but they will be so uplifted by your courage… https://t.co/yHhYtCWdz9
— Jemele Hill (@Jemele Hill)1512962048.0

HLN's S.E. Cupp shared a story about being bullied as a child, saying, "It's got nothing to do with you and everything to do with them." Sunny Hostin, from "The View," ended with a reminder that "being different makes you special."

The bullies are the problem Keaton. Not you. Always remember being different makes you special. @Everything_TN https://t.co/K9VBbrYSQx
— Sunny Hostin (@Sunny Hostin)1512948046.0

It's wonderful to see so many people, from so many backgrounds, come together in support of this one boy.

It's worth remembering, however, that he's not the only child in the world being bullied.

According to StopBullying.gov, 28% of U.S. students in grades 6 through12 have experienced bullying. 30% of students have admitted to being a bully to others. School bullying creates a hostile environment not conducive to learning and puts students' physical, emotional, and mental health at risk.

If Keaton Jones' story inspired you to take action, check out the StopBullying prevention toolkits for students, parents, teachers, and community members.