37 fans got a life-changing surprise from Nicki Minaj: lots of money for school. 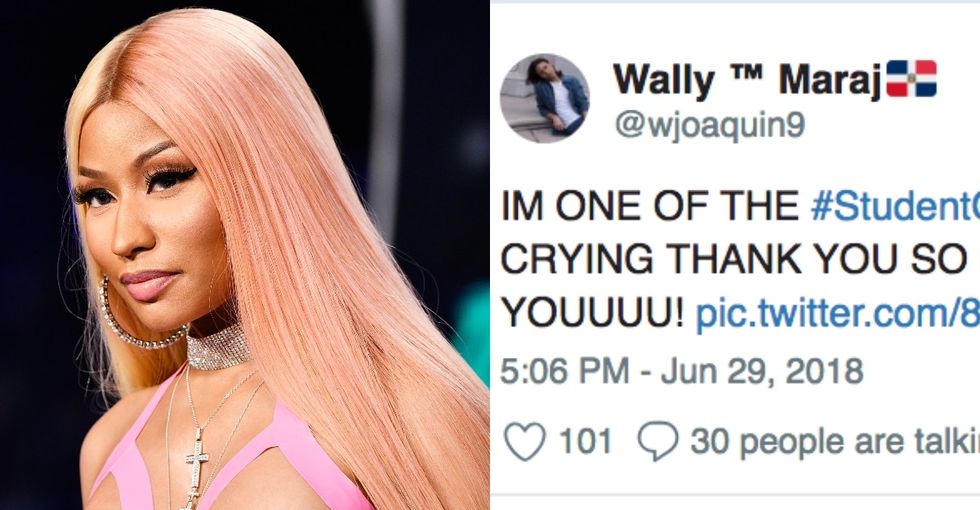 Nicki Minaj is a lot of things — rapper, business mogul, and now, the patron saint of cash-strapped students.

Minaj just announced the winners of her Student of the Game contest, all of whom will receive financial assistance for school straight from the "Chun-Li" singer herself.

After narrowing down finalists, Minaj chose 37 people to support — with money going toward everything from tuition to equipment to helping pay for some students' AP tests and get others back into school (because you know the FAFSA isn't all it's cracked up to be).

The reactions to her act of generosity were more than just a little enthusiastic.

Here's just a selection of responses to the announcement:

And a special congrats to this person, who said they were winning something for the first time in their life and really hitting that jackpot:

How did this begin? In May 2017, a fan asked Minaj to pay for his tuition, and it started a movement.

Minaj was promoting a contest for a fan to join her at an awards show at the time. And after she let it be known that she could fly anyone from anywhere to hang out with her, one fan hit her with an important question: Could you help me with my tuition payment instead?

The tweet was (mostly) a joke, but Minaj not only paid the fan's tuition — after she verified he was picking up straight A's — but started paying off other fans' tuitions, too. She helped more than a dozen students at that time.

This makes me so happy. [A few from the other day] I'll do another impromptu payment spree in a month or 2 but pls know that I'm launching my official charity for Student Loans/Tuition Payments VERY SOON! You'll be able to officially sign up! I'll keep you posted! 🎀

Imagine making a joke and getting that phone call.

And Minaj isn't done yet. She's said she's going to keep the scholarship running — hopefully until there are no applicants left or she runs out of money.

The artist has always been outspoken about the importance of education. She's been preaching at her fans to stay in school since the beginning, sometimes even telling them to skip her concert if the choice was between watching her perform and planting their butts firmly into their chairs for first period.

Here's Minaj yelling at her stans to stay in school from a moving vehicle:

And at a 2012 concert in Denmark, Minaj asked "Where my girls in school at?" "Don't you drop out of schools, barbs, OK?" she implored.

The scholarship proves that she's not just paying lip service to the message. I can't wait until a college names an entire wing after her.