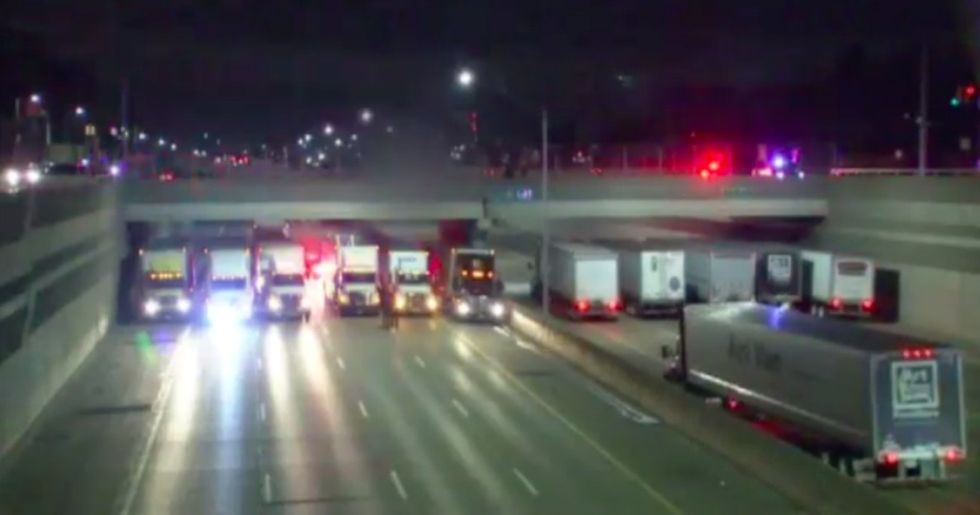 This article originally appeared on 04.24.18

Around 1 a.m. on April 24, semi-truck drivers in the Oak Park area of Michigan received a distress call from area police: An unidentified man was standing on the edge of a local bridge, apparently ready to jump onto the freeway below.

Those drivers then did something amazing. They raced to the scene to help — and lined up their trucks under the bridge, providing a relatively safe landing space should the man jump.

The impressive line-up wasn't a coincidence — the drivers were prepared for exactly this sort of situation.

Sgt. Jason Brockdorff of the Huntington Woods Police Department told The Detroit News that the response was something local police and truck drivers had actually trained for. But what was unusual was the sheer number of drivers who responded to the call.

"That's a practice we use if we have a jumper," Brockdorff said. "We try to do it every time, to lessen the distance someone would travel if they were to jump. Fortunately, that didn't happen."

The incident lasted nearly four hours, into the early morning. However, once the trucks were in place, the police were able to more comfortably negotiate with the unidentified man.

Eventually, the man walked off the bridge on his own and is currently receiving medical help.

In a pair of tweets, the local police department called attention to the incident to remind people in similar situations of the importance of seeking mental health services (emphasis mine):

This photo does show the work troopers and local officers do to serve the public. But also in that photo is a man struggling with the decision to take his own life. Please remember help is available through the National Suicide Prevention Lifeline at 1-800-273-8255.

You can also call a loved one, member of the clergy or 911. There are so many people that can help you make the choice to get help and live! It is our hope to never see another photo like this again.

Working together, the police and everyday strangers saved a life.

Ordinary people heeded the call of service to help a fellow person who was struggling. It's a powerful image that's impossible to ignore, and a reminder of humanity at its best.

Keep ReadingShow less
tyler adams
Get stories worth sharing delivered to your inbox
By signing up you agree to Upworthy's privacy policy.
Science

The automated sorter technology is fascinating, as is watching it work in slow motion.

For thousands of years, people around the world have been honing the art of agriculture. For the vast majority of human history, people planted and harvested and sorted produce largely by hand, gradually developing tools and machines over time that would make farming more efficient.

Many crops still have to be harvested and/or sorted by hand, but thanks to a rather mind-blowing machine, tomatoes aren't one of them. A machine that harvests tomatoes saves a ton of time and labor, but as tomatoes don't all ripen at the same time, pulling up an entire tomato plant results in a good number of green ones getting into the mix.

One solution to this problem would be to have the tomatoes transported down a conveyor belt in a factory while workers spot and remove the green ones by hand. However, an automated green tomato sorter does it right in the field as the tomatoes are being harvested, and a whole lot faster than any person ever could.

Keep ReadingShow less
ingenuity
Get stories worth sharing delivered to your inbox
By signing up you agree to Upworthy's privacy policy.
Trending Stories
best of humanity
Pop Culture