11 times teachers totally blew us away with love for their students. 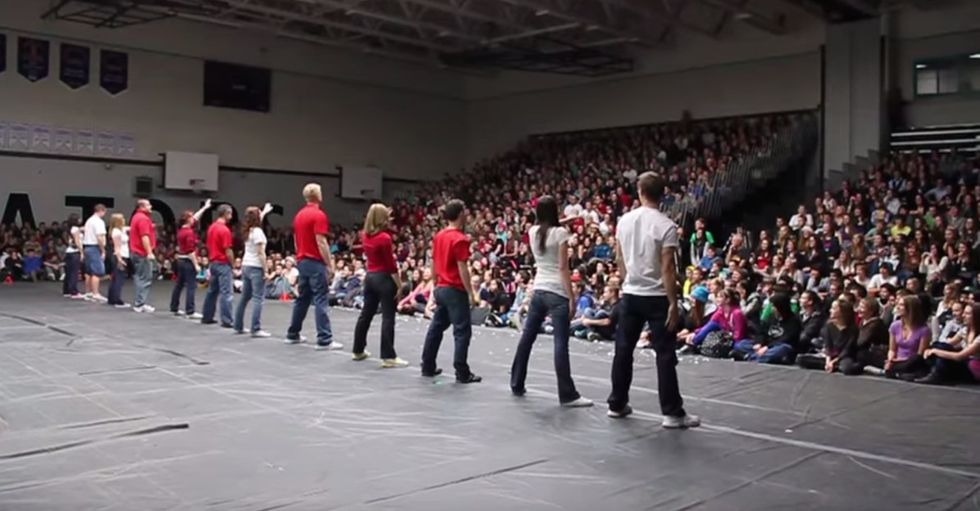 If children are our future, what does that make teachers?

I think we'd all agree that the people in charge of teaching the next generation are pretty important. Yet educators are still under-appreciated and underpaid.

Thankfully, that doesn't stop them from being amazing.

Not a day goes by that we don't hear an incredible story of a teacher going way above and beyond for her students. They pay for supplies out of their own pockets. They work extra hours to help kids who are falling behind.

And that's not even the half of it.

Here are 11 times teachers completely blew us away with their creativity, generosity, and passion for the job.

1. A gym teacher got the whole class cheering a boy with cerebral palsy.

It was race day at Colonial Hills Elementary School. Matt Woodrum, who suffers from cerebral palsy, wanted to run, but he quickly fell behind and began to struggle.

John Blaine, his gym teacher, jogged up to him to offer some encouragement, rather than pull him to the side.

Pretty soon, the whole class was trailing Matt as he ran, with John leading the cheers as they all crossed the finish line together.

Warning: Watching the full video may cause a severe case of the cries.

2. These teachers transformed their students' lockers into literary works of art.

Teachers at Biloxi Junior High spent one summer painting over an entire hall of lockers, decorating each like the book spine of a famous literary work, including a few modern classics they knew students would like.

They wanted to give the kids something fun to look at and get them pumped up about reading.

"We love the students here and it brings interest and gets them excited about coming to school," one teacher told WLOX.

Image from "The Ellen Show."

Sonya Romero teaches kindergarten in a poverty-stricken area of Albuquerque, New Mexico. When her kids show up in the morning, first she asks, "Have you eaten today?" Then, "Do you need anything to wear?"

She helps out with extra clothes, snacks, and basic care for every kid — out of her own pocket.

"We usually spend about the first hour of our morning getting ready for the day," she told "The Ellen Show."

4. This biology teacher wears wacky outfits to get her students excited to learn about the human body.

It can definitely be a challenge to get kids to pay attention to an important lesson. That's why Debby Heerkens, a biology teacher in the Netherlands, stood on a table during an anatomy lesson and stripped off her clothes.

Underneath? An anatomically accurate spandex suit featuring all the muscles of the body. And another one beneath that showing bone structure.

Her method might have been a little odd, but I'm sure her students didn't forget that lesson for a long time.

5. This gym teacher got his kids to exercise by breaking out the "Whip/Nae Nae."

Jason Paschall, a gym teacher at Harvest Elementary School in Alabama, needed a fun way to get his students moving and building good exercise habits.

So he put on their favorite song and figured out how to incorporate some extra cardio into the routine. The results? Hilarious, adorable, and a great workout!

He even filmed it and put it on YouTube so other teachers around the country could use the routine.

6. One of his students was bullied, so he read a gay fable to the whole class.

Omar Currie, a third-grade teacher from North Carolina, overheard some of his students calling one boy "woman" and "gay." So he sat them all down and read the famous and controversial "King & King," a children's fairy tale that depicts a same-sex relationship.

Omar wasn't thinking about starting a controversy. He just wanted the kids to think more carefully about how other people feel.

"The moral is to treat people well, no matter who they are," he told The Huffington Post.

7. A sex-ed teacher wasn't allowed to talk about condoms ... so he talked about socks instead.

Sanford Johnson was in the middle of sex-ed training when the instructors told him he wasn't allowed to talk about proper condom use.

"No problem," he thought. And so he made this video to teach kids how to properly put on a sock if they were to ever "be engaged in a sock activity."

Safety first, kids. Here's the excellent lesson in its entirety.

8. Chris Ulmer compliments all of his special ed students each and every morning.

Chris teaches special education at a school in Jacksonville, Florida, and he says sometimes the kids can feel like outcasts. So he starts every day by showering each student with genuine compliments.

"I noticed the kids were always more motivated, happier, and better-behaved on [the days that began with affirmations]. So we started doing it every day," he told ABC News.

Um, I think we'd all love it if our days started like that. Kudos to Chris for giving a little extra love to some kids who really need it.

9. One of her kids told her she couldn't understand him because she was white. So she changed her entire approach.

Emily Elizabeth Smith, a fifth-grade elementary teacher from Texas, recently accepted a big-time teaching award. In her acceptance speech, she talked about a moment that changed her forever.

"Things changed for me the day when, during a classroom discussion, one of my kids bluntly told me I couldn't understand because I was a white lady," Smith said. "I had to agree with him." She says she went home and cried.

From then on, she made some big changes. Together, they read Langston Hughes. They studied Latino culture. They talked about the crisis in Syria. They explored ideas that reflected a more diverse and global curriculum.

She was already a good teacher, but her willingness to admit her own shortcomings turned her into a great one.

10. These brave teachers surprised their students with an amazing flash mob of "Don't Stop Believin'."

Being an awesome teacher doesn't always have to be so serious. Take this group from Walnut Grove Secondary School, who put on a fabulous rendition of the "Glee" version of "Don't Stop Believin'."

Their dance moves (and their enthusiasm) are actually really impressive, and the kids absolutely gobble it up. It's a must-watch.

11. This teacher literally crosses rivers to get to her students each day.

Elizabeth Miranda of the Philippines might just take the cake for being the most dedicated teacher ever. Each and every school day, she walks two hours through jungle and crosses five rivers just to reach the students in Sitio Barogonte, an extremely remote village.

And you thought your commute was bad.

She's the only one close enough to be their teacher, so she had to find a way to make it work. And she has.

Let's give it up for the teachers, huh?

There are so many who will never make it on a list like this or to the front page of the Internet with some brilliant act of heroism. But just showing up day in and day out and dedicating themselves to helping kids get the education they deserve is more than heroic enough.

Pass these stories along and help our teacher friends know that their hard work is appreciated.