11 pictures that show why the U.S. women's soccer team deserves a raise.

The U.S. Senate urges the U.S. Soccer Federation to give the team equal pay. 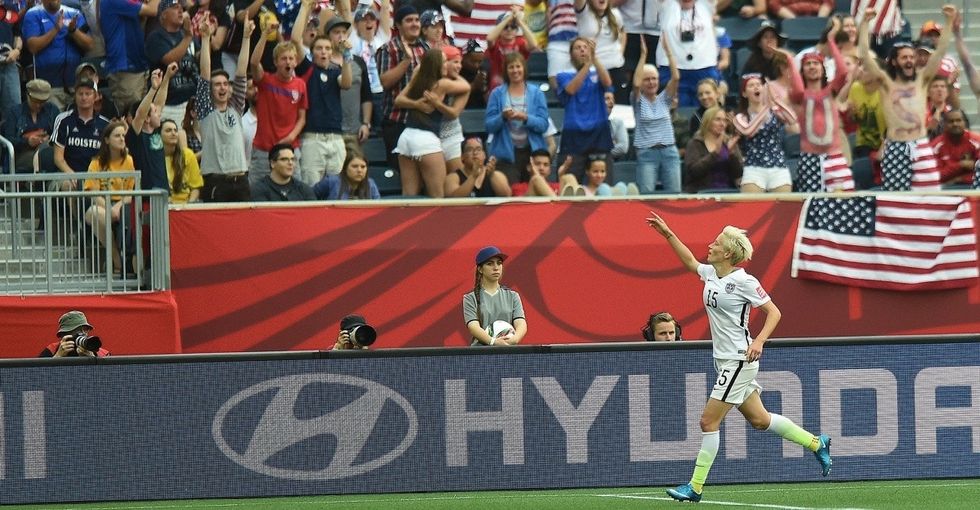 Earlier this year, members of the U.S. women's soccer team made a really great point about income inequality.

Their point basically being, "Hey, why are we being paid only about one-fourth what you're paying the men?" The U.S. women's soccer team generates more revenue then the U.S. men's soccer team and is far more successful than the men's team — so what's up with the pay difference?

Five members of the team filed a wage-discrimination action with the Equal Employment Opportunity Commission in hopes of getting the U.S. Soccer Federation to bump their pay equal to their male counterparts.

The good news is: The U.S. Senate unanimously passed a resolution that calls on the USSF to give the women's team equal pay.

It seems that when it comes to supporting the nearly unstoppable U.S. Women's National Team, we've found an issue Democrats and Republicans can agree on.

The bad news is: The resolution is not legally binding, so the federation isn't being forced to comply.

Here are 11 reasons why the USSF should go ahead and pay up already:

Here's the team receiving their gold medals at the 2012 Olympic games in London. Photo by Ronald Martinez/Getty Images.

3. They got their own parade in New York.

4. They met the president.

After winning the 2015 Women's World Cup, the team stopped by the White House to present President Obama with a team jersey. Photo by Jim Watson/AFP/Getty Images)

5. They have awesome fans.

And let's not forget the players...

6. Hope Solo, who holds the U.S. record for most career shutouts.

7. Carli Lloyd, a midfielder and team co-captain with 79 career goals for the national team.

8. Becky Sauerbrunn, a defender and co-captain known for her strength and self-motivation.

Becky Sauerbrunn, #4, chases down a loose ball against pressure from midfielder Chelsea Stewart of Canada. Photo by Peter Aiken/Getty Images.

9. Ali Krieger, one of the team's strongest backline players and known for her ability to chase down loose balls.

10. Alex Morgan, a forward with 64 career goals for the national team.

Alex Morgan, #13, goes up for a header against goalkeeper Nadine Angerer of Germany. Photo by Minas Panagiotakis/Getty Images.

11. Megan Rapinoe, a midfielder who's appeared in 113 games for the national team and known for her passing skills.

Wage inequality affects women all over the world, not just famous athletes.

In the U.S., there's been a push by Democrats to pass the Paycheck Fairness Act, though it's been blocked four times before. The bill would amend current law, toughening up the Equal Pay Act of 1963.

While the action taken by the Senate doesn't singularly solve wage inequality, it can certainly be considered a goal for women everywhere. 1-0.