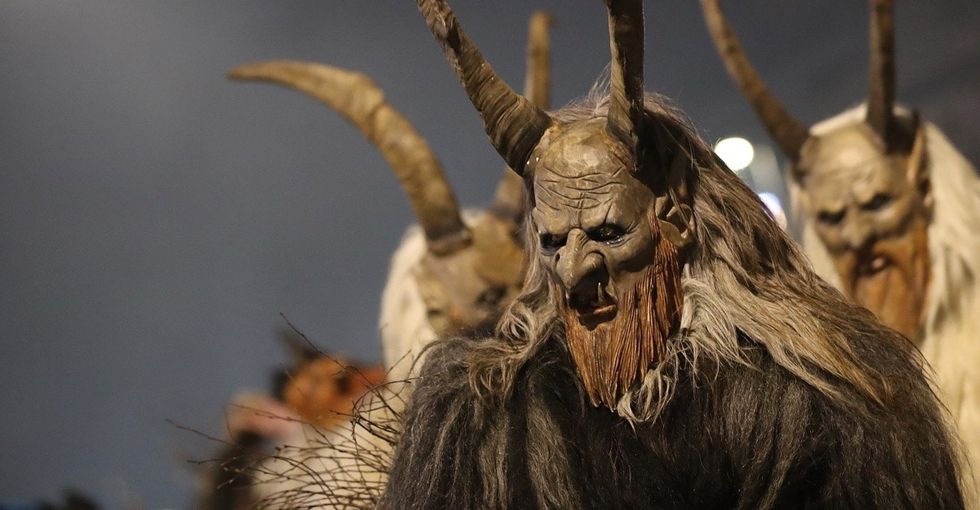 If the holidays were a drink, they'd be a venti vanilla peppermint mocha frappacino. With extra whipped cream.

Don't get me wrong, I love Christmas carols, cookies, and terrible sweaters as much as the next guy, but after a couple of weeks, it can be a little much.

I can feel my blood sugar rising just looking at this picture. Photo by Robyn Beck/AFP/Getty Images

But you know what cuts through all that sugar like a big splash of strong black coffee? A pretty little thing called Krampus.

"OK, say cheese and whatever you do, don't turn around." Photo by Sean Gallup/Getty Images.

If you're not familiar with this increasingly popular Christmas icon, Krampus hails from Alpine countries, such as Austria and Slovakia. A holdover from pre-Christian traditions, Krampus is basically St. Nicholas' half-devil, half-goat frenemy(?) who goes around scooping up naughty children into a sack and hitting them with sticks.

Originally more obscure, and even banned during the '30's, Krampus has enjoyed a resurgence lately that's even extended beyond Austria. I mean, you know you're doing well when you get to square off against Adam Scott in an extremely campy horror-comedy flick.

On Dec. 6, Getty photographer Sean Gallup was in Pongau, Austria, where hundreds of actors marched in the annual Krampus Parade. Check out some of the pictures below:

Krampusi? Krampusfolk? What is the plural here? Photo by Sean Gallup/Getty Images.

Some of these wooden masks are incredibly detailed and beautiful, in a Guillermo Del Toro kind of way.

Anyone else excited as hell for "The Shape of Water," by the way? Photo by Sean Gallup/Getty Images.

The kids seem to love it. Because of course they do. Have you met kids?

I must not fear. Fear is the mind-killer. Photo by Sean Gallup/Getty Images.

You just kind of want to hug it. Photo by Sean Gallup/Getty Images.

Some children even find costumes of their own and take part.

Austria has the best Halloween costumes, and it's not even October. Photo by Sean Gallup/Getty Images.

For a half-devil-goat-thing, this Krampus sure looks bashful once their classmates came over to say hi.

It must get pretty stuffy under those costumes though. These actors get a last gasp of air before the parade.

Plus, you know, they're basically wearing a giant fur coat. Photo by Sean Gallup/Getty Images.

Meanwhile, St. Nicholas and an angel are there to reward the children Krampus doesn't steal away.

Soon enough it'll be time to go back to sweetness and light. But, for now, at least, Krampus is the star of the show.

By the way, if you haven't watched the other weird Christmas horror movie "Rare Exports," it's pretty great. Photo by Sean Gallup/Getty Images.

Listen, the holidays can be pretty overwhelming. It can feel like if you're not happy and chipper and holding twin babies all the time, you're kind of letting the spirit of season down (even though, psychologically, it's important to be able to accept your darker emotions sometimes).

But maybe that's why people are starting to really love Krampus. He's not just an interesting cultural touchstone, he's a chance to let loose, flirt with fear and darkness a little, and ... relax. As weird as I know that sounds.

Plus he's metal as fuck.