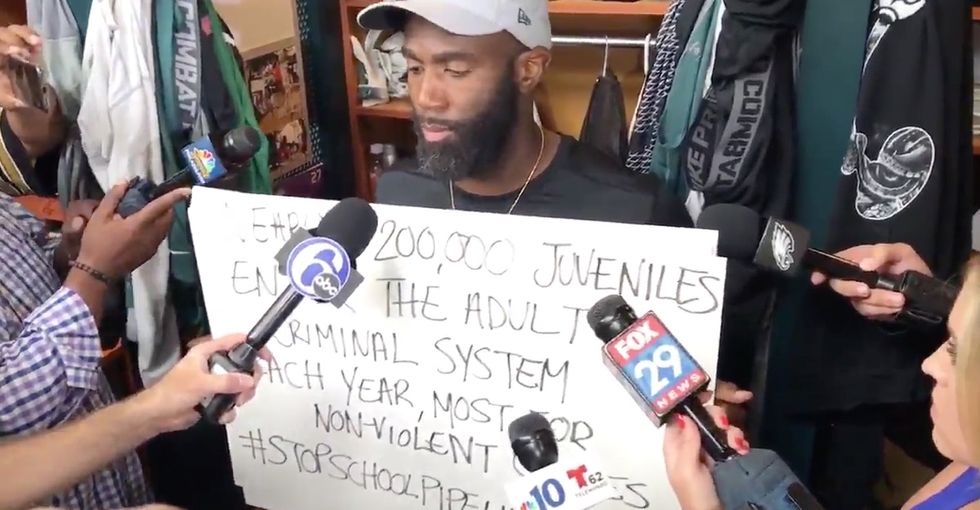 After the Super Bowl champion Philadelphia Eagles were uninvited from their scheduled visit to the White House in early June 2018, star safety Malcolm Jenkins decided to try something different when asked by the media about player protests.

He greeted them with silence — instead answering questions with a series of signs.

Malcolm Jenkins responded to questions today by holding up a series of signs. He did not speak. Here are a few. https://t.co/I01lfMwVgq
— Mike Garafolo (@Mike Garafolo)1528308879.0

"YOU AREN'T LISTENING," he wrote in all caps. And to be fair, there's good reason to believe they aren't.

Nearly two years after Colin Kaepernick took a knee to protest police brutality, some people still don't get the message, wrongly believing that the gesture was intended as a show of disrespect toward the national anthem, the flag, the military, the police, or some combination thereof.

For almost a year now, President Donald Trump has been railing against the league and players who have dared to participate in protests under this false pretense.

It's no wonder that Jenkins — who devotes his free time to visiting prisons, working to improve police-community engagement, and speaking with lawmakers about racial injustice — is sick of having to answer basic questions of what these protests are all about.

Rodney McLeod, Malcolm Jenkins, and Chris Long stand during the national anthem at an October 2017 game. No member of the team kneeled in protest during the 2017 season. Photo by Rich Schultz/Getty Images.

With poster board and a marker, Jenkins got his message out, focusing on the issues.

"More than 60% of people in prison are people of color," read one of his signs. "Nearly 200,000 juveniles enter the adult criminal system each year, most for non-violent crimes. #StopSchoolPipelineToPrison," read another.

On other cards, he played up the off-field work he, his teammates, and friends do to support their causes: the million dollars Kaepernick has given to charity, Chris Long's massive donation to education, and Ben Watson's and Demario Davis' work for voting rights with Louisiana House Bill 265.

There's a lot of injustice in the world, and Jenkins is using his platform to try to help. His attitude should be one to emulate, not scorn.

The day of the scheduled White House visit, Jenkins outlined some of his frustrations with the media's tendency to frame NFL players as "anti-America, anti-flag and anti-military."

"It takes empathy and time to listen to others' experiences that may be different than your own," he wrote. "It takes courage to stand up for the TRUTH even if it's not a popular one."

He's putting in the work to try to help people who don't have it so easy. He's using his voice (or, in this case, his marker) to lift up the concerns of people society often ignores. He's doing the work we'd all be proud to see our family, neighbors, and elected officials doing.

So why is Jenkins being slammed as ungrateful and spoiled?

Maybe he's right: People aren't listening. It's time they started. We could all learn a lot from his example.