Why you might want to visit this inclusive amusement park on your next vacation. 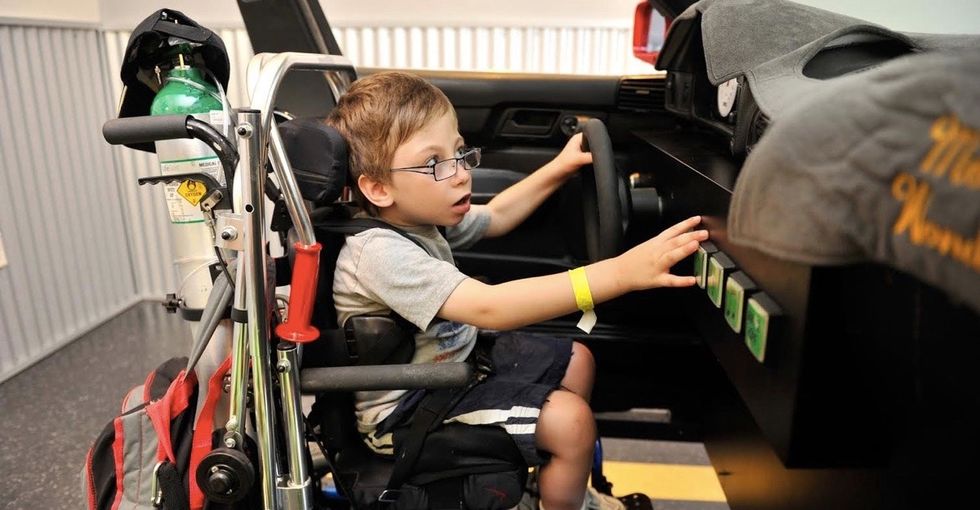 I can still remember my first trip to an amusement park as a child.

I remember the anticipation and excitement that came from choosing my favorite horse on the carousel, my mother lifting me up and placing me in the saddle, and instantly being transported into a world of wonder and amusement.

Unfortunately, amusement parks aren't always accessible to all people. There are countless children and adults with disabilities or special needs who would seemingly never be able to experience a theme park like I could.

Life is a carousel. I'm gonna ride it. All images via Morgan's Wonderland, used with permission.

An amusement park in Texas has created a world where everyone can make those memories.

Reeling in a big catch in the fully stocked catch-and-release pond.

Morgan's Wonderland is a one-of-a-kind theme park where every attraction is specially designed for "100% inclusion" of those with disabilities.

Music to my ears.

The San Antonio-based park has a long list of unique rides and experiences, including carousels made for people in wheelchairs, off-road jeeps with built-in ramps and compartments to allow full wheelchair access, a fully stocked fishing pond with minders to help anyone reel in that big catch, wheelchair swing sets, and roughly 20 other rides and attractions, all created to serve people with a range of special needs.

A journey of the senses.

The Sensory Village entertains the senses of those with cognitive challenges through interactive videos and a news station that lets you conduct a weather forecast and see yourself on TV. Want to try galloping? Mechanical horses replicate the experience of riding for people who might not otherwise be able to.

Ready to hit the open road in a car simulator.

Opened in 2010 by philanthropist Gordon Hartman, who was previously a prominent real estate developer, Morgan’s Wonderland has provided fun and laughter to 65,000 children and adults from over 60 countries and all 50 states.

They’ve done so completely free of charge to those with disabilities or special needs, too. As a nonprofit, they are fueled by donations.

The motivation for the park came from Gordon Hartman’s own family life.

The namesake and inspiration for the park is Morgan Hartman, the 21-year-old daughter of Gordon and Maggie Hartman, who is cognitively challenged and also has some physical special needs.

Gordon recalls watching his daughter at the pool, attempting to play with other children on a vacation. He noticed that the other children were unsure of how to interact with Morgan and subsequently didn’t include her. The kids weren’t being mean, according to Hartman. “They didn’t know how to play with or understand her,” he told Upworthy.

Knowing that there were millions of people just like Morgan, he envisioned a park where the culture was in line with their needs and specially designed to ensure inclusion. Then he built it.

Fast-forward five years, and they are now expanding the idea even further.

In November, the park announced it would break ground on what they call the world’s first “ultra inclusion” waterpark.

It will feature unique wheelchair access and have special considerations for those who are hearing or visually impaired.

Morgan’s Wonderland is helping create a culture of acceptance.

The hope is that the idea of inclusion will continue outside the walls of the park and into society. Here, kids and adults of all abilities play together every day while increasing their awareness and understanding of one another. Gordon made it very clear that this is a park for everybody and not just those with special needs.

Morgan's Wonderland is important not only because it overcame countless design challenges to provide fun for everyone but also because it’s trying to inspire an ethos, a way of being, a culture of acceptance and inclusion in our society as a whole.

And let’s not forget this part: It’s a lot of fun.