What this teen wants you to know about the hijab after her dad's text went viral. 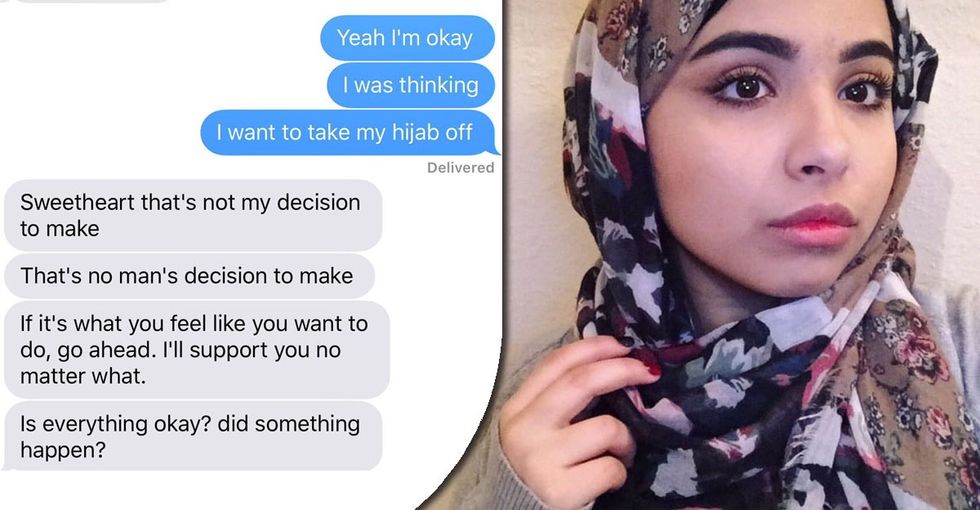 Lamyaa, a 17-year-old from Pennsylvania, has gotten used to harassment from strangers online.

Much of the time, their target is her Muslim faith.

"Personally, being an Arab Muslim woman in America, these sort of hateful messages aren't uncommon," she explains.

On April 14, 2017, Lamyaa tweeted a revolting message she'd received from a stranger.

It read: "Stop defending Islam Bit*h shut up you couldn't take that scarf off or your dad would beat your as*."

By "scarf," of course, the person was alluding to Lamyaa's hijab — a head covering worn by some Muslim women as an expression of their faith.

Lamyaa decided to text her dad and ask him what he'd do if she did, in fact, decide not to wear her hijab — and his response made her tweet go viral.

She posted their conversation:

Lamyaa: Baba, I want to tell you something.
Lamyaa's father: Talk to me [asks her if she's OK in Arabic]
Lamyaa: Yeah I'm okay. I was thinking. I want to take my hijab off.
Lamyaa's father: Sweetheart that's not my decision to make. That's no man's decision to make. If it's what you feel like you want to do, go ahead. I'll support you no matter what. Is everything okay? Did something happen?

Since Lamyaa posted the offensive message along with her conversation with her father, her tweet has been liked and retweeted hundreds of thousands of times.

"I have gotten many heartwarming messages of people showing me support, but also of people wanting to learn more about Islam or wanting to be a part of it," she explains. "I felt like I could help in a way, and it was very humbling."

Lamyaa is using the attention to clear up harmful stereotypes about Islam, Muslim women — and men — and the hijab.

"People believe that Islam is misogynistic, hateful, or violent, and I think that stems from their inability to differentiate culture and religion," she explains. "Islam is a religion and, like all religions, it is what you bring to it."

For instance, some women are forced to wear a hijab, and that's a "horrible" form of oppression, the teen later pointed out on Twitter. But many Muslim women, like Lamyaa, wear one because they choose to — for a wide variety of empowering and personal reasons.

"I wear my hijab because it is sacred to me," Lamyaa says. "It displays my connection to my faith and God. When I have the hijab on, I act kinder and I am more aware of what I say and do. This is because not only am I representing myself, but I am representing a faith much bigger than me."

"If I had one thing to say to people who have misconceptions about Islam, it would be: Speak to a Muslim," Lamyaa says.

"Have a conversation with a Muslim. Many of us are willing to answer any questions and clear up any misconceptions. Muslims are not some separate group. We are a part of America. We are people."